Brain Surgery in 3-D: Playing Soon Near You 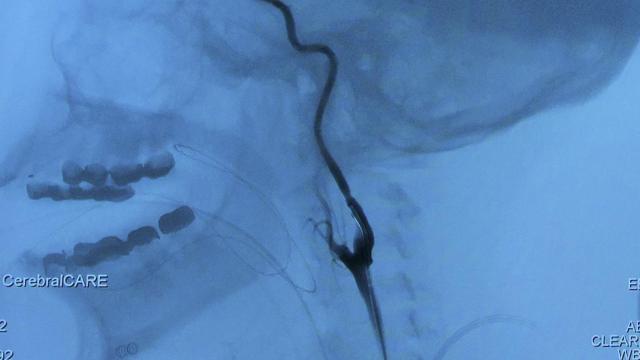 One blue surgical drape at a time, the patient disappeared, until all that showed was a triangle of her shaved scalp.

His patient, Anita Roy, 66, had impaired blood flow to the left side of her brain, and Langer was about to perform bypass surgery on slender, delicate arteries to restore the circulation and prevent a stroke.

The operating room was dark, and everyone was wearing 3-D glasses. Lenox Hill is the first hospital in the United States to buy a device known as a videomicroscope, which turns neurosurgery into an immersive and sometimes dizzying expedition into the human brain.

Enlarged on a 55-inch monitor, the stubble on Roy’s shaved scalp spiked up like rebar. The scissors and scalpel seemed big as hockey sticks, and popped out of the screen so vividly that observers felt an urge to duck.

“This is like landing on the moon,” said a neurosurgeon who was visiting to watch and learn.

The equipment produces magnified, high-resolution, three-dimensional digital images of surgical sites, and lets everyone in the room see exactly what the surgeon is seeing. The videomicroscope has a unique ability to capture “the brilliance and the beauty of the neurosurgical anatomy,” Langer said.

He and other surgeons who have tested it predict it will change the way many brain and spine operations are performed and taught. “The first time I used it, I told students that this gives them an understanding of why I went into neurosurgery in the first place,” Langer said.

But there is more to it than just the gee-whiz, Imax factor. The shared viewing makes 3-D surgery an ideal teaching tool. In addition, Langer and other doctors say the device is smaller and much less cumbersome than standard surgical microscopes and provides better light.

It can easily be moved and angled to show bits of anatomy that surgeons would otherwise have to twist and crane their necks to see. Two surgeons on opposite sides of the table can work together easily.

Standard surgical microscopes are enormous and require a complicated draping process to ensure sterility. Not so with the new videomicroscope, which is covered with just a sleeve that Langer said can be slipped on like a condom.

Neurosurgery can take many hours, which surgeons operating with magnifying loupes or microscopes often spend looking down, their necks bent. As the clock ticks, discomfort becomes pain, and over the years chronic injury to the neck and back can be a career-ender for some surgeons. The new device lets them operate while looking straight ahead at the 3-D screen, using the image to guide their hands.

“I don’t think there’s any doubt that it’s going to be valuable,” Langer said, but added, “In the eyes of someone who’s more conservative and who’s not as willing to try new things, they may not get over the hump and be willing to do it.”

The device at Lenox Hill is called the Orbeye, made by Somed — a joint venture of Olympus and Sony — and marketed by Olympus. Langer has received consulting fees from the company.

A number of other medical centers in the United States have also been testing the Orbeye. Dr. Charles L. Branch, chief of neurosurgery at Wake Forest Baptist Medical Center in Winston-Salem, North Carolina, said his first patient with it was a red bell pepper.

“I cut a hole and plucked seeds out of the center,” he said. “I wanted to make sure you could see down a tubular opening. It worked really well.”

He quickly moved on to humans, and has used the equipment in about 20 spine surgeries, all minimally invasive and performed through a tube. “The very first case, I almost felt like I was getting carsick,” he said. But it was a fleeting sensation, and he adapted quickly.

“It’s really cool,” Branch said. “It’s like being in the Imax. It lets not only the surgeon but everybody else in the room see what’s going on. Instead of having to lean up against the microscope, and strain my neck or back, I can stand comfortably, look at the big screen in front of me and work with my hands.”

He described the camera as “a Coke can on a stick over my shoulder,” easy to move, adjust and angle into positions not possible with a microscope.

There are 10 neurosurgeons in his department, Branch said. “Everyone that’s used it has seen some potential benefit, but not everyone has decided they want to use it in every case.”

He said that the company had lent an Orbeye to his hospital for surgeons to try out, and that he hoped the hospital would buy “a handful” of the devices, more than one because so much surgery is done there. Branch said he had no financial ties to the company.

“I don’t think it’s a gimmick,” he said. “I believe it will be widely adopted fairly quickly.”

Mark Miller, a spokesman for Olympus, said the Orbeye’s pricing would be similar to that of standard surgical microscopes, which range from $200,000 to $1 million. The system that Lenox Hill bought cost about $400,000, Langer said. Other companies are also trying to enter the market.

“I think we’ll see three or four competitive products pop up,” Branch said. “That will make the technology less expensive.”

Dr. Bob S. Carter, chief of neurosurgery at the Massachusetts General Hospital, said using the Orbeye was like having “Superman eyes,” but added that his hospital was also evaluating other devices and had not yet decided which to buy. The technology, he said, is “the way of the future.”

Roy, a retired administrative assistant who lives in the Bronx, first noticed troubling symptoms in 2015: episodes of weakness in her right hand, and trouble speaking. Tests at a local hospital ruled out a stroke. But the occasional episodes continued, and in July 2017, while recovering from heart surgery at Lenox Hill, she had a seizure.

A battery of tests found she had moyamoya disease, a rare condition first identified in Japan. The name means “puff of smoke,” and describes patients’ X-rays, which show a cloud of fragile blood vessels that sprout in the brain where normal vessels are blocked.

There are probably various causes, which are not well understood. Many patients are children. The condition can progress and lead to multiple strokes, mental decline and, in adults, death from brain hemorrhage.

Roy had no doubts: Hoping to avoid a major stroke that could cripple or kill her, she wanted brain surgery.

Her operation, on Dec. 15, was the first bypass Langer performed with the Orbeye, though he and his colleagues had used it for other operations. This type of bypass is one of the most difficult neurosurgical operations, and requires stitching together arteries that are only a millimeter or so in diameter. Colleagues say Langer is one of the few surgeons in the world with the skill and experience to perform it well. A vessel in Roy’s scalp — one that Langer called “the Michael Jordan artery,” because his can be seen pulsing at his temple — would be rerouted to feed a deeper artery whose blood supply had been cut off.

The procedure started with assistant surgeons touching an ultrasound probe to Roy’s temple to detect the pulse of the scalp artery, and then marking the vessel’s path with purple ink so that Langer would know precisely where to cut. Then he would begin the painstaking process of freeing the two branches of the artery from their surrounding tissue.

When the scalp artery was free, the surgeons took a drill and a saw to Roy’s skull, removing a disc of bone about three inches in diameter. Magnified 15 times on the monitor, her brain, webbed with bright red blood vessels, gleamed in the light and pulsated with each heartbeat.

It took about 10 stitches to sew the scalp artery to the artery in the brain, using a curved needle about the size of an eyelash and fine thread barely visible to the naked eye.

“The first two stitches are the hardest,” Langer said. “They set the whole thing up. I’m sewing vertically, but I have no trouble seeing. It’s high magnification.”

One slip could easily sew the fragile, slippery vessels shut instead of joining them. Every move was clearly visible to everyone in the room.

When the stitching was done, Langer used an ultrasound probe to check for the rhythmic whooshing sound that would mean blood was flowing through the newly created channel.

Initially, the flow was weak, and another neurosurgeon, eyeing the monitor, suggested a bit more dissection to loosen the recipient artery. Langer took his advice. It worked.

The clear view from the 3-D screen makes that kind of kibitzing possible.

“I have to be open to that,” he said. “A lot of guys are egomaniacal and don’t want to listen to anybody else.”

The next step was to place the other branch of the scalp artery directly onto Roy’s brain. Soon, surgeons were fastening the disc of skull — newly notched to let the rerouted artery pass through — back into place with tiny mending plates.

By 4 p.m., six hours after the surgery began, Roy, the drapes removed from her face, was blinking in the glare of the operating room, and moving her arms and legs. An anesthesiologist told her the surgery was finished and had gone well. Roy managed a sleepy smile.

Three days later, in a robe and bright red socks, she was sitting up in bed, chatting with her husband over lunch. It was hard to believe she’d so recently had brain surgery.

Without surgery, for patients like Roy, estimates for the risk of a stroke range from 20 percent to 50 percent or even higher within five years, Langer said. After successful surgery, the risk drops to a few percent a year or less.

Roy, to be released that day, was more than ready to leave the hospital. “I need some air,” she said. She was looking forward to the walk across town with her husband to catch an express bus home to the Bronx.