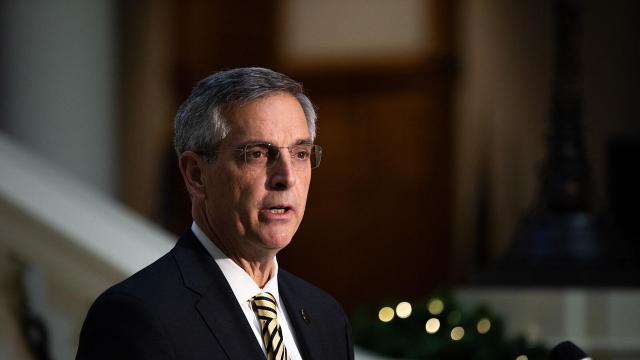 CNN — Georgia's top elections official will certify the results of runoffs that will tip the power balance of the Senate to Democrats as soon as possible, he told CNN, but he would not commit to completing the task before Joe Biden is inaugurated as President on January 20.

"We will get that done as soon as we can," Secretary of State Brad Raffensperger said Thursday, noting he intends to wrap up by Inauguration Day. He cannot certify the results until counties do so, and only a few had done so by Friday.

In a wide-ranging interview, Raffensperger, a Republican, also called the insurrection a day earlier at the US Capitol "horrifying." The chaos, he said, was a consequence of two months of people misrepresenting the facts of the November presidential election -- including Biden's victory in Georgia -- and spreading disinformation on social media.

Some blame for that rests with President Donald Trump, said Raffensperger, who as recently as last week was personally lambasted by Trump for refusing to falsely say that the President won reelection in his state.

"I have said from Day One that we really have to (be) mindful of our speech, we can't spin people up and play people and get them into an emotional frenzy," he said.

Five people, including a US Capitol police officer, are dead after Trump supporters on Wednesday breached one of the most iconic American buildings, engulfing the nation's capital in chaos after the President urged them to disrupt the ceremonial counting of the electoral votes that confirmed Biden's win.

"It's one thing to have a peaceful, you know, nonviolent, you know, demonstration, or a parade to get your point across. But that, well, went way beyond it," Raffensperger said.

National leaders from both parties should condemn the violence, he said.

"Just imagine what our founders would say if they looked at that, you know, what they fought for. It wasn't so we could bludgeon each other. It was so that we could come together and have peaceful, respectful conversations on the halls of Congress, and that's where we worked out our differences," Raffensperger said.

Raffensperger reiterated that Georgia's elections were fair. "The facts are on our side," he said. "We had fair, honest elections in Georgia."

Just because you don't like the result of an election, doesn't mean you go down the road of violence, he said.

"We work our differences out in the halls of our general assemblies, in the halls of Congress, but not out on the street bullying, shooting, beating up people. It's hoodlumism," he said.

Further, the violence at the Capitol has "negated (and) obscured" Trump's accomplishments, Raffensperger said.

Trump hurt the Republican Party during the Georgia's Senate runoffs, he said, distracting the GOP candidates with falsehoods about the presidential race when they should have focused on their own campaigns.

Georgians on Tuesday elected Democrats Jon Ossoff and the Rev. Raphael Warnock to the Senate, giving their party control of both chambers of Congress and the White House for the first time in a decade. It allows Biden potentially to enact sweeping legislation and push through Cabinet nominations without Republican support.

Raffensperger has gotten death threats since Trump lost Georgia. Asked by CNN if he still supports the President, he said the point is moot as Trump is on his way out. For his part, Raffensperger remains "a proud Republican," he said.

Despite discussions among officials in Washington about employing the 25th Amendment or impeachment to remove Trump from office in the coming days, Raffensperger said the President should be allowed to finish his term, then the US should move on and begin the process of healing.

Meantime, Georgia's Senate elections certification deadline is January 22, though Raffensperger plans to certify the results as soon as possible, he said.

"My heart may be broken as a Republican," he said, "but we have a job to do."

Correction: A previous version of this story misspelled Brad Raffensperger's last name. The article and headline also have been updated to make clear the timeline of certifying the Georgia runoff election.