Boy shot in face asks deputy, 'Are you going to make me better?'

Harrells, N.C. — Sampson County Deputy Jason Riley pulled over a speeding van Thursday night and found himself in the middle of a life-saving scene.

A 10-year-old boy shot himself in the face, and his grandfather was racing him to Sampson Regional Medical Center in Clinton when Riley stopped the vehicle. The deputy called for paramedics and started administering first aid. 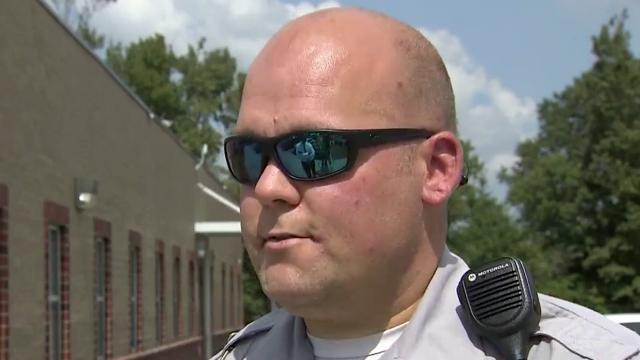 "Anything dealing with a kid is tough. I have kids myself, so you kind of take it a little bit extra serious," Riley said Friday. "He looked at me and he said, 'Are you going to make me better?' I said, 'I'm going to try.'"

The boy was flown to UNC Hospitals in Chapel Hill, where he underwent surgery to remove a small-caliber bullet from his cheek. He was stable on Friday.

Sheriff Jimmy Thornton said authorities still haven't found the gun, but Jeffrey Lee Newton Jr. told investigators that he was walking along Belvin-Maynard Road with his stepson when he heard a gunshot and saw the boy fall to the ground.

The boy was about 300 yards from his mobile home when he was shot, Thornton said, and Newton and the boy weren't the only ones there.

"It was more than just the stepdad and the 10-year-old. There were, I think, three or four more children present or maybe all five of them. You see, there's five children in that house, ages 2, 4, 8, 10 and 14," the sheriff said.

Newton, 31, of Harrells, was charged with felony child abuse inflicting serious injury, permitting a child to have access to or use of a firearm and contributing to the delinquency of a juvenile.

The Sampson County Department of Social Services is investigating to make sure the other four children in the home are safe, authorities said.