Boy recovering after being bitten by shark in Surf City 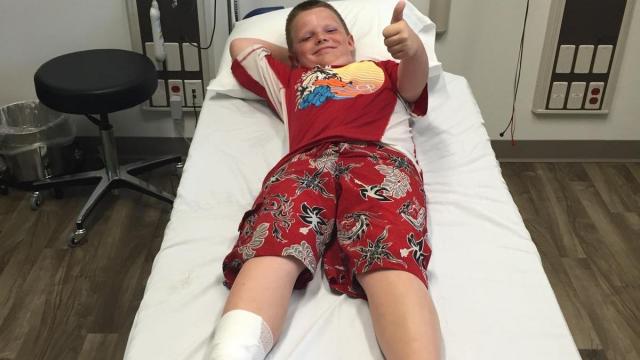 An 8-year-old boy is recovering after being bitten on his foot and leg by a shark Wednesday in Surf City.

Chris Noyes said Thursday that his son, Brady Noyes, is in good spirits and recuperating following his release from a hospital, where he was treated for minor wounds.

He said Brady was facing the shore and standing knee-deep in the surf – about 20 yards away from other children playing in the water – when the shark came up from behind.

Brady let out a scream but didn't immediately know what happened because he never saw the shark coming, Chris Noyes said.

The shark bite happened in the 700 block of South Shore Drive.

Police said the wounds were superficial and treated by emergency personnel at the scene, but the boy’s parents took him to a hospital emergency room as a precaution.

"Please mention our hearts go out the victims that were less fortunate in these past few weeks," Chris Noyes said, referring to two children who lost limbs in separate shark attacks in Oak Island June 14.

Kiersten Yow, 12, of Asheboro, lost her arm below the elbow and was injured in the leg. About an hour later and 2 miles away, Hunter Treschl, 16, of Colorado Springs, Colo., was bitten and lost his arm.

Surf City Town Manager Larry Bergman says the town does not plan to warn visitors about the shark bite or tell swimmers to get out of the water, but it has increased police beach patrols.

"It really comes down to a joint decision on public safety officials, including myself," Bergman said. He said he would have decided to close the beaches "if there was a big hazard, if there was an imminent danger."

The town does not have an official lifeguarding staff, instead employing police officers and water-rescue-trained firefighters to patrol the beaches on four-wheelers. Beachgoers swim "kind of at their own risk," Bergman said.

He said some people approached police officers after hearing about the boy's bite on social media.

Brady had been swimming about five blocks from a fishing pier Wednesday afternoon. Town policy prohibits people from swimming or surfing within 300 feet of a fishing pier, Bergman said.

Chris Noyes said Brady won't go back into the water in the coming days because he needs to keep his wound clean and wrapped, but he will go back.