Bost: 'It's the best thing that's ever happened to me' 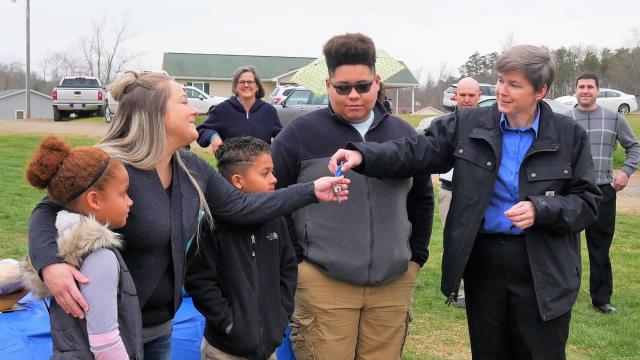 Dobson, N.C. — A Sunday in December was life-changing for Christy Bost as she took the keys to her new home on Opportunity Lane in Dobson.

It was also a landmark day for Greater Mount Airy Area Habitat for Humanity: This was the 50th home built in Surry County in the affiliate's 24-year history.

"Our first partner family still lives in their home," said Sandra Richards, vice-chairman of the board of directors, to a crowd of about 40 that gathered Dec. 17. "Thanks to the State Employees Credit Union, which has enabled us to build more homes than we had imagined."

The Bost home is one of 104 across North Carolina being built as part of the SECU Foundation's Mountains-to-the-Sea Challenge, a three-year program to build a Habitat home in each of North Carolina's 100 counties – plus a few extra where affiliates' jurisdictions overlap.

But this day was devoted to one family gaining a toehold in the great American dream.

"Today we celebrate one house, one family and four amazing people who will call this home," said Myra Combs, chairman of the Mount Airy affiliate's board of directors.

"I met Christy last year," when she first applied for a Habitat home, Combs said. "I could tell that she was exactly the kind of person we seek to serve at Habitat: People who demonstrate the need, the ability to pay and the willingness to partner. Life has thrown challenges her way. She's a single mother. She's rented the same home for seven years. This home can make a wonderful life for her and her children."

The Bost family home has four bedrooms, two baths and covers 1,352 square feet. It's Energy Certified, which means the utilities will cost less than what she was paying at her rental home. And, best of all, with the assumption of a no-interest loan from the SECU, Christy Bost will save $111,000 over the life of her 30-year mortgage compared to what she would have paid with a traditional mortgage.

"It's the best thing that's ever happened to me in my life," says the 36-year-old single mother of three who was left to raise her family on her own after their father's death. "I had never bought anything and owned it."

"I was brought up without a whole lot of money. There was a roof over ours heads and food on the table, but nothing from grandparents was passed down. I've worked since I was 17 years old. I had two jobs in high school. I had to pay my way."

"We are proud of Christy and her accomplishments," Combs said. "She will be a great neighbor."

And with that, Combs presented the house keys to the new homeowner.

Bost's eldest son, Sydney, is 16 and a junior at Surry Central High School. Daughter Layla, 10, is in fifth grade and son Travon, 9, is in fourth at Dobson Elementary. Bost has worked at Burger King for 15 years, with a bit of time off to explore other employment.

Her biggest job, though, is being a mom. For Bost, getting a home to call her own is huge.

"It's amazing. I have prayed and prayed to have the courage to move forward in life, instead of settling for being comfortable. So I took the risk. The Lord above helped me with that." 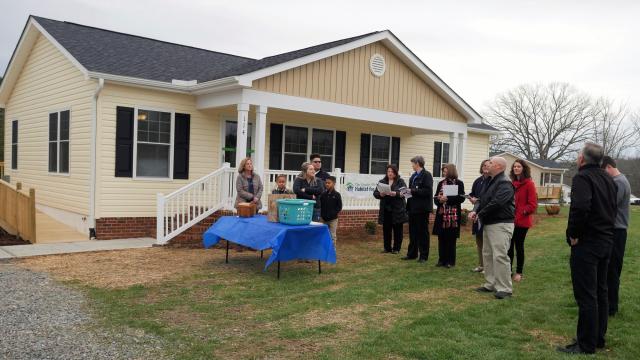