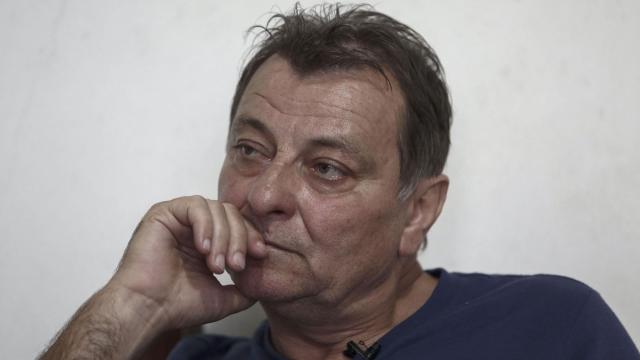 (CNN) — A leftist Italian fugitive has been detained in Bolivia and will be sent to Italy as "a little gift" from far-right Brazilian President Jair Bolsonaro to Italy's hardline Interior Minister Matteo Salvini.

Cesare Battisti, a 64-year-old former communist militant, was wanted for four murders in the 1970s, which he has denied.

He spent years living in Brazil as a political refugee, but has been on the run since December, when the country's former President Michel Temer revoked his residence and approved his extradition to Italy.

Bolsonaro welcomed the arrest, writing on Twitter: "Congratulations to those responsible for capturing the terrorist Cesare Battisti!"

"Finally justice will be made to the Italian assassin and companion of ideals of one of the most corrupt governments that have ever existed in the world (PT)," he added, a reference to the party of left-wing former President Luiz Inacio Lula da Silva, who had allowed Battisti to remain in Brazil.

Bolsonaro, inaugurated as President on 1 January, had vowed to capture Battisti and see his extradition through.

Italy's Prime Minister Giuseppe Conte confirmed an Italian aircraft will land in Bolivia at 11 a.m. ET to collect the fugitive.

"Our jails will wait for him here, where he will serve life imprisonment that the Italian courts have sentenced at the time, certainly not because of his political ideas, but for the four crimes committed and for the various crimes related to armed struggle and terrorism," Conte wrote on Facebook.

"A little gift is on its way," Brazilian MP for Sao Paulo and one of Bolsonaro's sons, Eduardo, tweeted to Italian Interior minister Mateo Salvini on Sunday, after news of the arrest became public. "Brazil is no longer a land of criminals," he added.

The development is likely to boost relations between the two far-right politicians, both of whom were swept to power on hardline, populist platforms in 2018.

Salvini hailed the news on Facebook on Sunday, writing: "My heartfelt thank you to President Jair Messias Bolsonaro and to the new Brazilian government for the changed political climate which, along with a positive international setting in which Italy has become a protagonist, have made possible this long awaited success."

"My first thoughts today go to the families of the victims of this murderer, who for too long has been enjoying the kind of life that he cowardly took away from others, pampered by half of the world's left," he added.

Battisti was a member of the Armed Proletarians for Communism (PAC) guerrilla group in Italy throughout the 1970s.

He escaped from an Italian prison in 1981 and was granted asylum in France, before fleeing to Mexico and eventually Brazil.

His residence in the country had been a source of diplomatic tension between Italy and Brazil, particularly when then-President Luiz Inacio Lula da Silva denied his extradition in 2009.