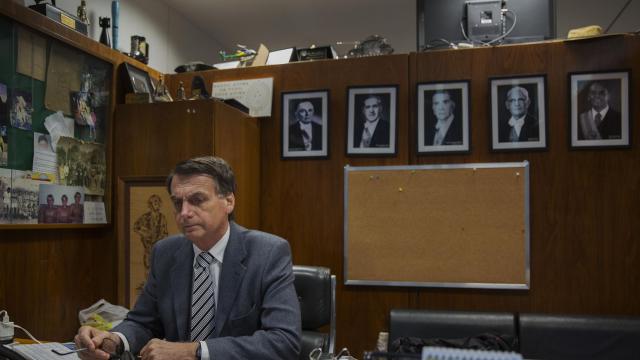 RIO DE JANEIRO — Had the blade slashed a bit more of Jair Bolsonaro’s abdomen, the evangelical preacher who came to see him in the hospital might have had to prepare a eulogy about his friend’s presidential hopes being dashed by the same plague of violence that fueled his stunning rise.

Instead, when he saw Bolsonaro in intensive care last month, the preacher, Silas Malafaia, who is enormously popular in Brazil, saw fit to crack a joke.

“Look what God did!” Malafaia recalls telling the candidate, who was dazed after undergoing numerous procedures to stitch up his intestinal tract and other organs. “You were stabbed, and now all the other candidates are complaining about all the television coverage you’re getting.”

Before the knife attack last month, Bolsonaro had already begun to look like an indomitable phenomenon in Brazilian politics, campaigning in angry outbursts against corruption and violence that largely matched the national mood.

But far from blunting his rise, the near-fatal stabbing crystallized Bolsonaro’s conviction that only he could straighten out a country reeling from years of economic trouble, corruption scandals and a record-high wave of bloodshed, the pastor said.

“I think it gave him a greater sense of purpose,” Malafaia said. “He said, ‘More than ever, my will to help these people, to rescue our nation, has increased.'”

A knack for turning setbacks into opportunity has been a constant for Bolsonaro, the far-right populist who won Sunday’s runoff election to become Brazil’s next president, upending the political parties and norms that have governed Brazil since the end of military rule more than 30 years ago.

Bolsonaro’s broadsides against women, gay people, Brazilians of color and even democracy — “Let’s go straight to the dictatorship,” he once said as a congressman — made him so polarizing that he struggled to find a running mate until early August. Traditional parties and politicians considered him too extreme.

“Elections won’t change anything in this country,” he said during one of his seven terms in Congress. “Unfortunately, it will only change the day that we break out in civil war here and do the job that the military regime didn’t do, killing 30,000. If some innocent people die, that’s fine. In every war, innocent people die. I will even be happy if I die as long as 30,000 go.”

Far from disqualifying him, his incendiary remarks over the years and throughout the campaign made Bolsonaro appealing to millions of Brazilians. Many see in him the kind of disruptive, status quo-breaking potential that propelled President Donald Trump’s victory in 2016.

On Sunday, Bolsonaro said during his victory speech that his government would uphold the constitution and democratic principles.

Trump called Sunday to congratulate him on his victory, following up with a tweet Monday morning that said, “Had a very good conversation with the newly elected President of Brazil, Jair Bolsonaro, who won the race by a substantial margin. We agreed that Brazil and the United States will work closely together on Trade, Military and everything else!”

While his rivals ran conventional campaigns, Bolsonaro, 63, channeled the wrath and exasperation many Brazilians feel over rising crime and unemployment — problems that they increasingly believe the endemically corrupt governing class is powerless to tackle.

Bolsonaro’s career began with a relatively short stint as an army paratrooper that ended in controversy, paving the way for his first electoral victory in 1988.

He became enthralled by the idea of joining the armed forces in the early 1970s when soldiers descended on an area near Campinas, his hometown in the state of São Paulo, hunting down a communist guerrilla leader.

Bolsonaro, whose candidacy was backed strongly by the military, has since taken credit for guiding the soldiers that day though a hilly area he knew well. It was one of many such manhunts during the military dictatorship that spanned from 1964 to 1985.

After graduating from a military academy in 1977, Bolsonaro rose to the rank of captain in an artillery unit.

But his time in uniform came to an end just as democracy was being restored. In an act of insubordination, Bolsonaro published an essay in the newsmagazine Veja in 1986 titled “The Salaries Are Low,” in which he took his superiors to task over military pay. “I run the risk of seeing my career as a devoted soldier threatened,” Bolsonaro wrote in the piece. Despite his patriotism and excellent service record, Bolsonaro added, “I can’t dream of meeting the basic needs that a person of my cultural and social level should aspire to.”

He was briefly jailed after publishing the article and soon came under investigation over a more serious allegation: that he was part of a plan to set off explosives in military bases as a means to pressure government officials to pay soldiers more. Bolsonaro has denied he participated in such a plot, which was not carried out.

But, again, instead of ruining his prospects, the controversies made him something of a folk hero in military circles. Bolsonaro leveraged the attention into a successful run for City Council in Rio de Janeiro in 1988. Then, in 1990, he ran for a seat in Congress and won with robust backing from military supporters. Bolsonaro became a polarizing figure soon after arriving in Brasília in the early 1990s, when the nation’s newly elected leaders were slowly rebuilding democratic institutions.

In 1993, he delivered a fiery speech before the lower house of Congress urging its demise, calling the emerging version of democracy in Brazil a lost cause.

“I am in favor of a dictatorship,” Bolsonaro thundered. “We will never resolve serious national problems with this irresponsible democracy.”

He said people across the country were pining for the return of the military. “They ask, ‘When are you coming back?'”

Bolsonaro was highly visible and frequently brash as a lawmaker in Brasília. But he was not prolific at passing laws. And he was not regarded as a consensus-builder in a highly fractured Congress.

Only two of the dozens of bills and amendments he introduced over 27 years in Congress became law. The legislation he championed showed that he was most passionate about supporting the police and the armed forces, and weighing in on social issues like abortion and gay rights, which he has adamantly opposed. In 2011, he told Playboy magazine that he would “rather his son die in a car accident” than be gay.

“If a gay couple came to live in my building, my property will lose value,” he added. “If they walk around holding hands, kissing, it will lose value! No one says that out of fear of being pinned as homophobe.”

Chico Alencar, a member of Congress who has followed Bolsonaro’s career since the two became city lawmakers in Rio de Janeiro at the same time, said Bolsonaro was seen as an outlier who focused zealously on a handful of issues, including communism and homosexuality.

“I have never seen him participating in debates about the electricity grid, the environment, education, health, urban mobility, housing,” said Alencar, who belongs to the liberal Socialism and Liberty Party. “He’s mono-thematic. Everything is about a communist threat. He hasn’t left the Cold War era yet.”

Alencar recalled how Mr. Bolsonaro took aim at educational materials in 2011 that sought to raise awareness about homophobia and denounced them as an incitement for children to become sexually active and question their gender identities.

“He is obsessed with the issue of homosexuality,” Alencar said. “Whenever there was a public hearing about gay rights, he would go, and get extremely worked up.”

Bolsonaro’s conservative views on issues like gay rights and abortion have endeared him to some in Brazil’s evangelical caucus, which has grown steadily in recent years.

But he mainly became known for his angry outbursts, perhaps most notably in 2003, when he shoved a leftist colleague, Maria do Rosário Nunes, on camera after telling her she was not worthy of being raped.

Now Nunes, a former human rights minister, said she fears that Bolsonaro — who has threatened to banish political opponents and make it easier for the police to kill suspected criminals — will be a ruthless leader.

“He is incapable of producing a consensus, an agreement,” she said. “There is no dialogue with him.” In early 2013, Bolsonaro began confiding in a handful of friends that he harbored presidential ambitions.

“Man, you’re crazy,” Malafaia remembers saying when Bolsonaro broke the news to him moments before the pastor officiated at Bolsonaro’s third marriage, in March 2013. “I didn’t believe it.”

Malafaia said Bolsonaro told him he wanted to fight “the criminals from the left,” referring to the Workers’ Party, which was in power at the time.

In the following months, as hundreds of thousands of Brazilians took to the streets to protest poor public services and corruption, Bolsonaro ran the idea by a trusted colleague in Congress.

“Why don’t you aim for the Senate?” Alberto Fraga, a fellow congressman who knew Bolsonaro from their days at the military academy, recalled responding with bewilderment.

In 2014, after Bolsonaro was re-elected to Congress with 464,000 votes, almost four times more than he got in 2010, he began traveling the country, holding rallies and presenting himself as a tough-talking disrupter of politics as usual.

Breaking with the political playbook for presidential hopefuls, Bolsonaro often used curse words during unscripted addresses. Hand-pistol signs became ubiquitous everywhere he went — an allusion to the candidate’s draconian proposals to curb violent crime by making it easier for the police to gun down suspected criminals. Soon, supporters started calling him “mito,” or the legend. Supporters began using yellow T-shirts with the slogan “Brazil is my party” that resemble the soccer jerseys Brazilians have worn in the past as a symbol of pride and national unity.

Many seasoned politicians and analysts expected Bolsonaro’s candidacy to fizzle as voters took a harder look at his long history of incendiary remarks against women and people of color.

But what many assumed would be a liability turned out to be an asset for an electorate fed up with a governing class widely regarded as duplicitous and dishonest, said Joice Hasselmann, who was elected to Congress this month by tying her candidacy to Bolsonaro’s.

“Jair has no filter,” Hasselmann said. “There’s a direct link between what he thinks and what he says.”

After the stabbing, Bolsonaro remained largely confined to a hospital room and later his beachfront home in Rio. He has done few probing interviews and declined to take part in debates.

But in the near-daily videos he has broadcast on Facebook, where he has more than 8 million followers, Bolsonaro, often accompanied by one of his sons, holds forth, jumping from one issue to the next, often toggling between agitation and sarcasm.

During a recent one, he lifted his shirt to show his colostomy bag and a large scar from the stabbing.

As his standing in the polls rose, veteran Brazilian political operators marveled at how a campaign strategy that seemed so haphazard was beating everyone else’s. If it looked messy and improvisational from the outside, Malafaia said, it is because it was.

“Look, I’m going to say something, and you can laugh,” Malafaia said, adding that Bolsonaro and his campaign “had no real strategy.”