BoJack Was Made for This Moment 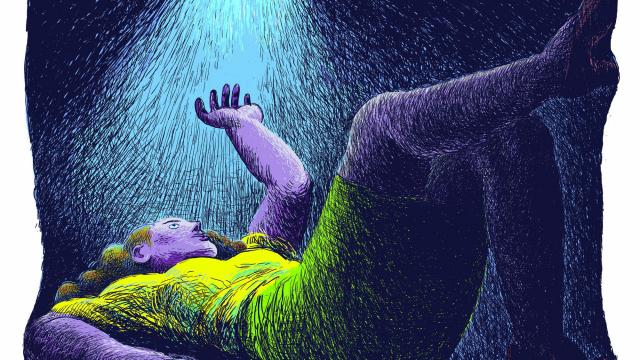 The reckoning has come for BoJack Horseman. Netflix’s washed-up Hollywood star has recklessly abused his power for four seasons: harassing his ghostwriter, goading his sober co-star into a bender that kills her, coming on to a friend’s teenage daughter.

He’s escaped accountability at each turn, all of his messes wiped clean by press agents and glossed over with star power. Only in the new season, to put it in the animated show’s anthropomorphic terms, do the chickens come home to roost. It’s a season about consequences, or the lack thereof. And it gives us an unflinching close-up of a famous abuser that only fiction could pull off right now.

It’s been a year since Harvey Weinstein was unmasked as a serial sexual abuser, lighting a fire that blazed through Hollywood and licked at the feet of its TV writers. Now #MeToo plots are proliferating onscreen. Television is nimble — it moves faster than film and publishing — and it’s formed the front line of the entertainment industry’s cultural response to its own crisis.

Seemingly every genre of show has located an angle: the headline-ripping procedural (“The Good Fight”), the misanthropic sitcom (“It’s Always Sunny in Philadelphia”), the frothy romantic comedy (“Younger”), and the broadcast news satire (the “Murphy Brown” reboot). There’s a podcast serial, too: “The Off Season,” which follows a fictional television host as he’s exiled to a Montauk hideaway while his network investigates sexual harassment allegations against him.

How much these shows get out of the issue hinges on how much they put into it. Some collapse trauma into a 20- to 40-minute episode, chopping it into beats and bending it into arcs. But a few understand that the subject is big enough to fill entire seasons.

When it comes to an issue as complex as abuse and its reckoning, form matters. “The Good Fight,” which has raided details of the controversial Aziz Ansari exposé and the murky “Bachelor in Paradise” misconduct to fill its dockets, is such a tightly wound procedural that it can seem to substitute a closed case for a kind of moral clarity. Though some dynamics stretch across the season — a male partner at the firm is increasingly wounded by “gender politics” — the episodic nature of its misconduct disputes means that its victims and accused are played by guest stars who scatter at episode’s end, leaving the firm’s coolheaded lawyers to tie the underlying issues into a bow.

Even the cynical structure of “It’s Always Sunny” — which resets after every episode, releasing its misanthropic bar staff to pinball around the pub again — feels oddly better suited to the moment. The recent episode “Time’s Up for the Gang” begins with Paddy’s Pub accused of being a danger to women in an online list; it ends with the crew facing zero repercussions and learning nothing, which faithfully represents a typical outcome for menaces like them.

There’s something flattening about the sheer accumulation of #MeToo television, of watching as harassment is endlessly recycled into fictional characters’ cases and capers. An episode can feel like a ticked box from a writer’s room: Yes, we are aware. It’s not clear that all these shows have something interesting to say, or if they just feel that they should. Even the abbreviated summary of a coming “Family Guy” two-part episode — which will depict Donald Trump manhandling the show’s resident teenage girl, Meg — already feels gratuitous.

It’s notable that Issa Rae, the creator and star of “Insecure,” has resisted writing a #MeToo plot into her own show, for fear of reducing the lives of black women into “a very special moment,” as she put it in an interview with Bustle. Instead “Insecure” sneaks in meta commentary on the limits of #MeToo TV through this season’s hacky show-within-a-show, a reboot of the fictional 1990s back family sitcom “Kev’yn” that grinds social touch points like Black Lives Matter and Time’s Up into topical puns, then pummels them into absurdity with a tinny laugh track.

“Insecure” intuits that there’s something outdated about the very special episode. It reflects a time when a handful of shows were expected to provide moral guidance on a full range of topical issues. Now there’s so much television, there’s no reason for harassment and abuse to be tidily sewn into a single installment. There’s something to be said for the shows that commit.

One standout is the forthcoming reboot of “Charmed,” which takes misogynistic abuse as its premise, and builds a battleground for its three young witches atop a university campus roiled by harassment controversies. The show stakes its claim to the moment from its opening line — “This is not a witch hunt, it’s a reckoning” — and draws from the example of real-world American witches who said they have used their powers to place hexes on men like Brock Turner and President Donald Trump. (It also delivers a pitch-perfect problematic male ally who boasts of being “retweeted by Roxane Gay.”) Telling its own tale of female revenge is “The Off Season,” a subtle and slyly funny fictional podcast series that follows disgraced TV host Bruce Alvarez as he absconds to the Hamptons, where he’s confronted by a young aspiring journalist who spies an opportunity to take him down for good.

Meanwhile, the romantic comedies “Jane the Virgin” and “Younger” are leaning into the moment by recasting their romantic interests in a new light, as potential abusers of their power. Jane reconsiders an old relationship with her graduate student adviser when she learns that she was just one in a pattern of female students he’s courted. And on “Younger,” the show’s central will-they-or-won’t-they pairing — between the assistant Liza and her boss, Peter — takes a turn for the maybe-they-shouldn’t as the reckoning over sexual harassment reverberates through the show’s publishing house once Liza and Peter finally get together. There’s something infinitely more satisfying about a show that works a new perspective on harassment into its existing world, as opposed to carting in a new storyline to satisfy a trend. And the move doubles as a reckoning for the show itself, and how it missed some nuance in crafting its relationships the first time around.

But perhaps only “BoJack Horseman” feels as if it’s been preparing for this moment for the whole life of the show. Its fifth season sketches in several shades of Hollywood abuse. Vance Waggoner, a Mel Gibson type, keeps offending new groups — Jews, women, Swedes — and each time is showered with the industry’s forgiveness despite demonstrating zero personal growth. Flip McVicker, the creator of a tortured noir crime show within the show, flexes his power over actors by forcing them to perform naked. A literal sex robot becomes the head of a television network. Then there’s BoJack, who adds to his long list of crimes against women by choking his co-star girlfriend while high on pills this season.

BoJack ranks among television’s new class of sub-anti-heroes, protagonists so bad that we don’t even root for them, exactly. We know that the more BoJack succeeds in Hollywood, the more monstrous he becomes. Mostly, we want him to stop. That all makes him a particularly interesting figure right now, as the public conversation around harassment moves tentatively toward what to do with men accused of misconduct. While “Charmed” can wring plenty of satisfaction out of depicting sexual harassers as literal demons and suggesting that the solution to their behavior lies in a spell book, “BoJack” grapples with the reality that harassers are people. Or at least, horse-people. BoJack is a fictional cartoon horse, and that certainly helps. The real disgraced men who have tried to inch back into public life — Louis C.K. taking the stage at the Comedy Cellar and radio hosts John Hockenberry and Jian Ghomeshi writing tortured personal essays in fancy literary magazines — have been met with well-earned disdain. These men have gotten themselves into trouble, and they think they can write and joke and perform themselves out of the mess. But they don’t seem to have done the work to earn our attention back. Part of the problem is that so many of them remain obscured in the fog of denial.

In their essays, Hockenberry and Ghomeshi downplay their culpability and deny the most serious accusations against them. For Hockenberry, unwanted touching and harassment are recast as “pathetically confessed romantic feelings.” For Ghomeshi, thoroughly reported claims of sexual assault and harassment from more than 20 women he worked with and dated are called “accusations circulated online.” (Though Ghomeshi was acquitted of several sexual assault charges in court, and settled a further assault claim, there are many more outstanding accusations.)

But we all know what BoJack did. Through him, we’re given a rare close-up inspection of the jumbled mess of self-aggrandizement and self-loathing that seems to drive so many public menaces. Investing our attention in BoJack doesn’t enable him; all it does is support a very good television show. Perhaps only fiction can provide this kind of inquiry right now, one that focuses on a man who’s done terrible things, and attempts to figure out what to do with him. It helps that it’s a show that’s as invested in its female characters as it is in its horse. The fifth season is as much about Diane, BoJack’s feminist ghostwriter turned unlikely friend, questioning her complicity in BoJack’s crimes, and her processing her responsibility to both him and the public.

Near the end of the season, when BoJack almost strangles a woman on set, he evades public consequences yet again. But his deeds weigh heavy on him, feeding his spiral of self-flagellation, addiction and recklessness. BoJack begs Diane to write a hit piece on him to publicly air every bad thing he’s ever done. She declines. A public performance, she tells him, is no substitute for real personal accountability. She drives him to rehab instead.