Ousted Boeing CEO exits with $80 million - but no severance 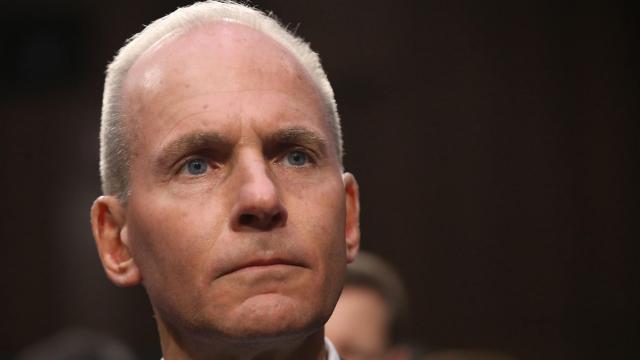 CNN — Ousted Boeing CEO Dennis Muilenburg will not receive severance as part of his departure from the embattled company, the company disclosed late Friday. But he still left the company with stock, options and other holdings worth tens of millions of dollars.

Muilenburg lost his job due to the ongoing Boeing 737 Max crisis. Boeing's board had stuck with Muilenburg through the first 10 months of the grounding of all 737 Max jets following two fatal crashes that killed 346 people. But on Dec. 23 the board announced that "a change in leadership was necessary to restore confidence in the company moving forward as it works to repair relationships with regulators, customers, and all other stakeholders."

A company filing said Muilenburg will get to keep some of the stock and other holdings he accumulated during his 30 years as a Boeing executive.

Muilenburg's holdings includes previous long-term compensation worth $29.4 million as of Thursday's closing price, according to the filing. He also keeps shares worth an additional $4.3 million, as well as distributions from pension and deferred compensation worth $28.5 million. And, finally, he has the right to exercise other stock options to purchase an additional 72,969 shares of Boeing stock that are worth $24 million. He will have to pay only $5.5 million to acquire those shares.

All told his stock, option and retirement holdings will net him about $80 million after the cost of exercising his current options.

The filing said that Muilenburg will lose other shares and options, worth about $14.6 million, in which he was not yet vested.

The announcement comes a day after Boeing released internal communications in which unidentified employees mocked the design of the 737 Max and questioned the plane's safety. The documents were turned over to to the FAA in December, and given to congressional committees looking into the 737 Max crisis on Thursday. Among the comments in the communications were one which described the jet as "designed by clowns, who in turn are supervised by monkeys."

In a different communication two employees agreed that they would not let their families fly on the plane.

"We regret the content of these communications, and apologize to the [Federal Aviation Administration], Congress, our airline customers, and to the flying public for them," the company said when they were released Thursday.

This is a developing story. Check back for further details