Board of Governors to vote on new UNC president Friday 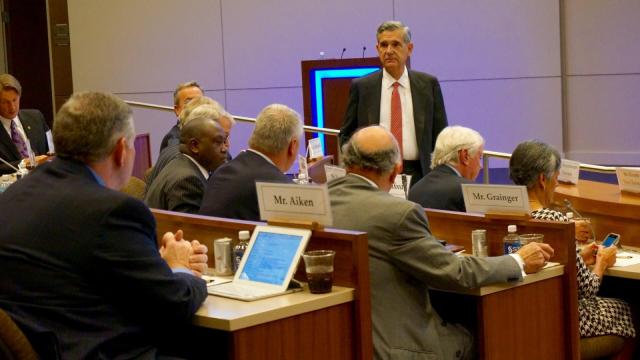 Chapel Hill, N.C. — The University of North Carolina System Board of Governors plans to vote Friday on a new president for the 17-campus UNC system, despite criticism from board members and lawmakers about the search process.

UNC officials released agendas Tuesday for the board's Personnel and Tenure Committee meeting on Thursday afternoon and the full board meeting Friday. The committee meeting plans a closed-door session to review "Terms and Conditions of Initial Employment of a Public Officer," while the full board will meet behind closed doors before hearing an update from the Presidential Search Committee in open session and electing a new president, according to the agendas.

President Tom Ross is being forced out in January after five years in charge of UNC.

The board held an emergency meeting in Cary last Friday that, according to multiple sources, was called to interview Margaret Spellings, a former U.S. education secretary under President George W. Bush, for the president position. The board met behind closed doors for more than four hours without taking action.

Gov. Pat McCrory also appears to have met with Spellings. When asked if the governor met with her, McCrory spokesman Josh Ellis said in an email to WRAL News, "Governor McCrory graciously and proudly welcomed a potential candidate to North Carolina at the governor’s mansion.

"They had a wonderful conversation about the interactions between the governor’s office and the university system with regard to technology and research development, job recruitment, and the Education Cabinet which the governor chairs," Ellis wrote in the email. "The governor has confidence the UNC Board of Governors, which are entirely hand-picked by the state legislature, will select a great candidate to oversee our excellent university system."

The handling of the hiring process has board members at odds with Chairman John Fennebresque.

"Among other things, in your short tenure you have blocked board members from accessing university staff for public information about the system, botched President Ross’ termination, hired an incredibly controversial search consultant and barred two-thirds of the board from participating in the hiring process," Thom Goolsby, a Wilmington lawyer and former state senator, wrote to Fennebresque and other members of the board this week.

Goolsby's letter went on to say that no matter how qualified Spellings or any other candidate might be, the process used to select her has been so tainted that Fennebresque could not hope to win confirmation. His letter has touched off a chorus of agreement and several more calls for Fennebresque to resign.

Board member Marty Kotis, a Greensboro real estate developer, objected to the emergency meeting, alleging that Fennebresque "contrived this 'emergency' as a subterfuge" to circumvent instructions from lawmakers about how to conduct the search for a new president.

Before leaving session at the end of September, lawmakers passed Senate Bill 670, which directs the 11-member search committee to bring at least three names to the full Board of Governors. That bill hasn't been signed into law yet, and Gov. Pat McCrory doesn't have to take action until Oct. 30.

Spellings, who now heads the George W. Bush Center in Dallas, is the only name to surface so far in the search to replace Ross.

Sen. Tom Apodaca, R-Henderson, said that he heard the names of at least two other candidates were presented to the board last Friday, which he said would meet the letter of the proposed law, if not the spirit.

"You hope (the turmoil) will settle down. I hope they do hire someone competent, someone who can deal with all the elements they’re going to be faced with," Apodaca said Tuesday.

A source close to the search told WRAL News that the board considered the names of at least three other candidates, including those from academia and the military, on Friday.

Lawmakers have been besieged by calls from UNC board members in recent weeks about the presidential search, Apodaca said, and they might have to revisit rules for future searches.

"I think we’ll definitely have discussion about that during the interim," he said.

"Our concern is not about any candidate for the presidency but rather the process which at least a few members of the Board have utilized that appears to cut against the fundamental notions of transparency and due process," Moore and Berger wrote in the letter.

A provision in Senate Bill 670 authored by Rep. Grier Martin, D-Wake, would have required the Board of Governors to hold public meetings with three finalists before any vote, but that was stripped from the final bill after board members persuaded lawmakers that public disclosure would scare off some candidates.

Martin said Tuesday that whoever is elected on Friday will face a harder task as a result of the fractious search process, something he pinned on Fennebresque.

"Why try to force through your pick in a fashion that is setting your pick up for failure?" he said.

Asked whether lawmakers would try to draft another openness provision, Martin said he was unsure, noting that it would depend on future chairmen of the Board of Governors.