Blue-green algae found in some NC lakes and ponds could be toxic to dogs, experts say 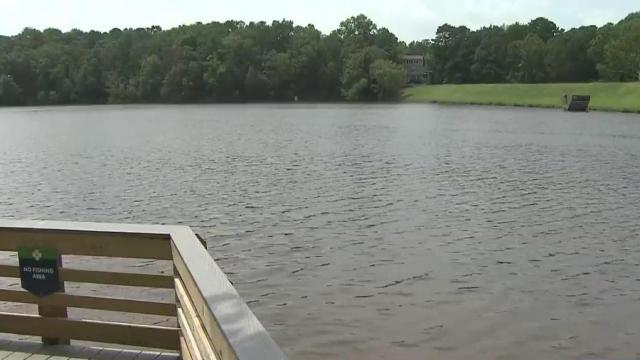 Cary, N.C. — The North Carolina Department of Water Resources is asking pet owners to be aware of an algae bloom present in some state ponds and lakes that can be toxic to dogs.

According to the NCDWR's Algal Bloom Map, Bond Lake, located off High House Road and Maynard Road in Cary, tested positive for 166,000 units of cyanobacteria bloom but negative for toxins on May 27.

Toxins found in some blue-green algae can kill dogs if ingested, but according to Doug McRainey, director of the Town of Cary's Parks and Recreation Department, the presence of cyanobacteria does not always mean toxins are present in the water.

According to McRainey, the town works closely with the NCDWR. Whenever algae is spotted, the town contacts the NCDWR to request water testing.

The May 27 tests of Bond Lake found no toxins were present in the water. Pet owners should look out for the presence of blue-green algae in freshwater and use caution if they choose to let dogs swim in lakes and ponds.

There's no cure for blue algae poisoning caused by toxins, and exposure nearly always leads to death in dogs, according to Blue Cross for Pets, a UK animal charity. Drinking from a body of water where blue-green algae lurks or licking it off fur can kill a dog within 15 minutes of exposure.

Blue-green algae is most common in the summer, and toxic algae blooms are more likely to infest bodies of fresh water when the weather is warm and waters are stagnant, according to the N.C. Department of Health and Human Services.

CNN reported on Monday the deaths of three dogs in Wilmington after the pets swam in a pond believed to contain cyanobacteria toxins.

The algae can sometimes be spotted, but Melissa Martin, who lost her dogs to the cyanoblooms in Wilmington, said she didn't notice the algae at first. Her veterinarian told her that what appeared to be debris from flowers were blooms of cyanobacteria.

Even if a health notice isn't posted on the NCDWR map, it's best for humans and pets alike to avoid waters that smell bad or look murky or odd in color, state health officials said.

On Tuesday, the map showed the Pitt Farm Pond in Edgecombe County, the W. Kerr Scott Reservoir in Wilkes County and the Greenfield Lake in New Hanover County tested positive for cyanobacteria bloom, in addition to Bond Lake.