Blue Apron may be up for sale as losses mount 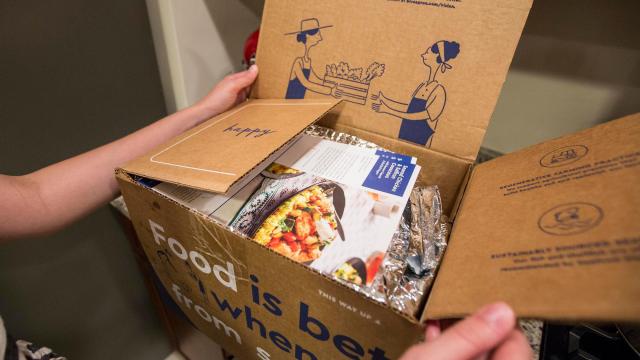 CNN — Blue Apron said Tuesday it is "evaluating a broad range of strategic options" that could include a sale of the company or its assets, a business combination, or raising capital.

The announcement comes less than a day before the struggling meal-delivery service company is set to report its latest quarterly results on Wednesday. Analysts are predicting that Blue Apron will report a loss of $1.60 a share -- a bigger loss than the same period last year -- and a sales drop of more than 30%.

Investors have been abandoning ship. The company's stock was trading at just 55 cents last June and was in danger of being delisted from the New York Stock Exchange before a 1-15 reverse stock split boosted the stock price to $8.25. In a reverse split, a company reduces the number of total shares outstanding in order to raise the stock price. But the market value of the company remains the same.

Blue Apron has continued to struggle since the reverse split. Shares have plunged more than 50% to below $4. The stock is now down a stunning 97% from the peak price it hit shortly after Blue Apron went public in June 2017.

The company said Tuesday that it does not intend to comment further on any strategic alternatives "unless and until its Board of Directors determines that further disclosure is appropriate."

What's gone wrong for Blue Apron? There is a ton of competition in the business, particularly since the barrier to entry is reasonably low.

Blue Apron has to contend with Germany-based HelloFresh, which is currently the market-share leader in the US, as well as rival services from Martha Stewart-backed Marley Spoon and Kroger owned Home Chef.

The company is trying to improve its customer retention rates. It has several different types of subscription plans to appeal to different consumers. The standard two-person plan offers three meals a week at a cost of $59.94 while the family plan for four people is $139.84 per week.

There are meal kits featuring Beyond Meat products for fans of plant-based proteins. Blue Apron has a partnership with WW that offers health-conscious dinner options. The company also occasionally offers menus designed by celebrity chefs such as Food Network's Christian Petroni.

And Blue Apron has expanded beyond meal kits to also sell wine, pantry items like olive oil and spice blends as well as knives, pans and other kitchen tools.

Turnaround may not be on the menu

Will any of this work? In the statement issued after Tuesday's market close, Blue Apron said "we continue to believe that we have the right strategy to drive our resumption of growth as we launch additional new capabilities and test new product offerings." It also is looking at "cost optimization initiatives," although its announcement contained no specifics.

The company also said it is looking at "cost optimization initiatives," although its announcement contained no specifics.

The company seemed to realize it needed to shake things up to stand out from the crowd even before the announcement. Blue Apron recently announced a plan to start selling what it calls Meal Prep kits, boxes that include ingredients for eight meals that can be made in advance in about 90 minutes.

"This practice of preparing whole meals in advance to better suit schedules, manage portion size, and help reach health goals has become a movement," said Blue Apron CEO Linda Kozlowski in a statement last week about Meal Prep. She cited the rise of online bloggers and influencers posting about meal prep on Instagram.

But Blue Apron has made other efforts to reach more customers that have not panned out as well as hoped. The company had a partnership with Jet, a Walmart company, to sell individual "Knick Knacks" meal kits at a price of $7.99 for a few months in 2019, but Blue Apron ended the deal in August.

Kozlowski said on a conference call with analysts at the time that the company needs "to focus our efforts on our core business, engaging with our customers week-in and week-out on our platforms through our direct-to-consumer service."

Blue Apron doesn't just compete with rival meal delivery companies either. Increasingly time-strapped customers are ordering meals to be delivered instead of cooking their own food. That means Blue Apron also has to contend with the likes of GrubHub, Uber Eats and DoorDash.

Analysts aren't too optimistic about Blue Apron's outlook. All four who currently follow the stock have Blue Apron rated a hold, which is Wall Street's polite way of saying sell.