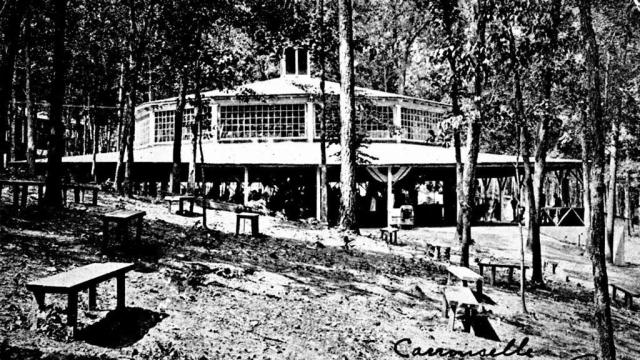 Raleigh, N.C. — You may not realize it, but every time you ride the carousel at Pullen Park, you are sitting on one of the only remnants of a century-old theme park that once stood in Raleigh during the early 1900s.

It may be hard to imagine a large, rickety roller coaster overlooking Glenwood Avenue or to envision a Raleigh neighborhood concealing remains from of century-old theme park. But tucked away in a Five Points neighborhood is the remains of a 108-year-old dance pavilion, where big bands once played while locals danced. 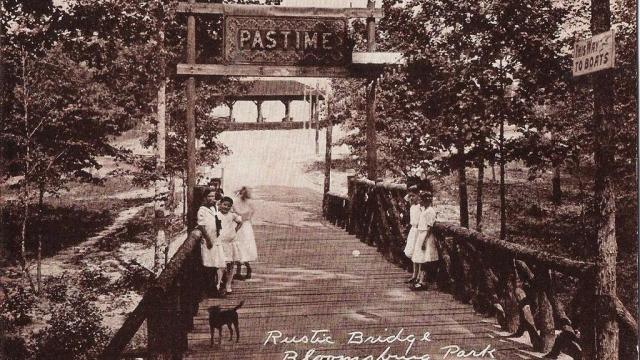 In fact, there are pieces of 1912's Bloomsbury Park scattered all about Raleigh, if you know where to look.

The State Archives of North Carolina shared this nearly unrecognizable photo of Five Points. On the left-hand side of the image, a railway can be seen running parallel to the road – the trolley line running to Bloomsbury Park.

Bloomsbury Park was Raleigh's version of Coney Island, a 'trolley park' at the final stop of CP&L's trolley line that provided public transportation at the time.

Trolley parks were relatively popular during the era, as they provided folks a reason to pay to ride the trolley on the weekends, when they didn't need to commute to and from work.

My own great grandmother, Nancy Alexander, recalled 'being courted' by great granddaddy at Bloomsbury Park. She enjoyed picnics on the lawn and listening to live bands play at the dance pavilion. She said she especially enjoyed riding the carousel.

Unfortunately, by 1920, the park closed.

The remains of the trolley tracks are still beneath Glenwood Avenue and are occasionally revealed during road work. In 2010, the tracks saw sunlight for the first time in decades.

A decade-old WRAL story explored the history of the trolley system then, but Bloomsbury Park remained unmentioned – a theme park that has been largely forgotten by time.

Many people don't realize the stone structure standing on Glenwood Avenue near Hayes-Barton was actually once a trolley stop. 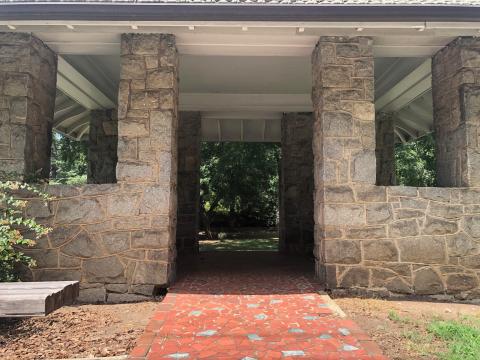 Although many Raleighites have said they assumed this structure was a bus stop, this stop is one of the only remaining pieces of the trolley system.

The final trolley stop is a platform where guests would step off to attend Bloomsbury Park. Then, the trolley would turn around on the platform and begin the trek back down Glenwood.

In the front yard of a family home, the remains of this trolley platform can be seen – just a set of stairs leading up a brick wall to a large, flat platform that has been completely overgrown to the point of being nearly unrecognizable. However, this platform matches up to the location shown on old maps of Bloomsbury Park. It's just a few meters away from a street aptly named: Bloomsbury Park Drive.

The Bloomsbury Park carousel, a piece of living history

The carousel, created by renowned German artist Gustav A. Dentzel, was already a treasured piece of art in its era.

Dentzel was famous for creating carousels as part of his Pennsylvania Carousel Company. The Bloomsbury/Pullen Park carousel is one of Dentzel's earliest surviving works of art. 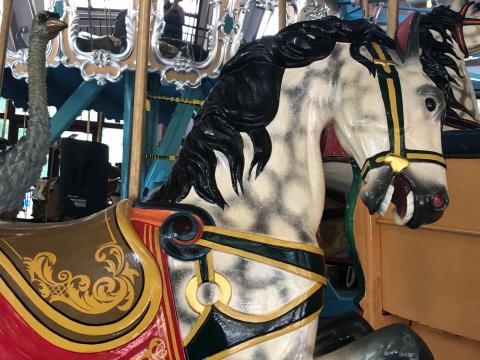 Although the media hailed Bloomsbury Park as a commercial success, bringing fame, notoriety and big-city sophistication to Raleigh, by 1920 it was but a memory. It remained abandoned for several years after.

The strain of WWI was perhaps too much for the burgeoning park. In 1918, American soldiers-in-training reportedly used the theme park as their training grounds, a bleak contrast to colorful carousels and twinkle-lights.

The dance pavilion is still standing, in ruins, in the back yard of a private home. Historians and journalists have not been allowed access to take photos; however, a report from the historic registry shows an old photo of how the ruins appeared in the more recent past.

The carousel is the only attraction that survived. It was sold at a fraction of the original price to Pullen Park, where children ride today, perhaps unaware their own great, great grandparents once rode the very same ride.

Our Hidden Historian exploring some remains from Bloomsbury Park, live:

Do you have an idea for a piece of local hidden history you'd like to see explored? Email hleah@wral.com to share your ideas or questions for her Hidden History segment.

Explore more lost history with the remains of GotNo Farm, a wonderland with enormous, eclectic statues of large animals forming a safari on a Raleigh farm in the 1950s.

Tromp through the woods to find the remains of Raleigh's NASCAR super speedway, still hidden near a Raleigh neighborhood.