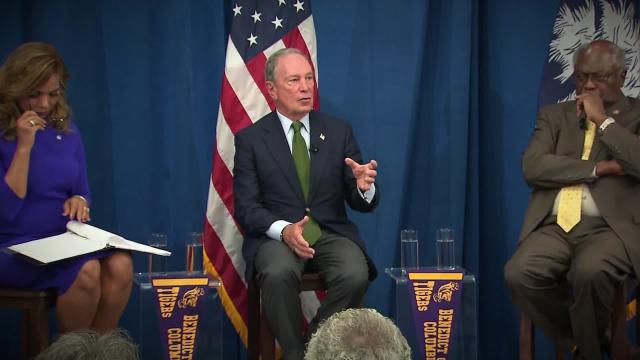 CNN — A version of this article first appeared in the "Reliable Sources" newsletter. You can sign up for free right here.

That's the view of one reporter at Bloomberg's media company -- and it's a POV that was echoed by other staffers who spoke with me on Monday.

Some journalists at Bloomberg News are relatively optimistic about how this will play out. Others are pessimistic. The unanimous emotion I found, in calls and texts and emails, is frustration. The media company's owner is making the jobs of his reporters quite a bit more difficult.

Reporters tend to be skeptical creatures, and that's definitely true in this instance. They're looking at the Democratic primary lineup and they're wondering why Bloomberg thinks he has a shot at the nomination. Some of them are worried that the former NYC mayor is going to embarrass himself by running and coming up short.

But that's not the primary concern they have. The primary concern is about what his 2020 quest will do to Bloomberg's newsroom. Meantime, Bloomberg kicked off his campaign in Norfolk, VA, on Monday... And in TV and digital ads all over the place...

There's never been a situation quite like this before — a media mogul running for president while employing thousands of journalists.

Most Bloomberg LP staffers will not be directly affected by the 2020 bid. But Bloomberg Politics reporters obviously will. John Micklethwait's Sunday memo unnerved some of the staffers who received it.

Perhaps Micklethwait's plan is the best path through awkward terrain. But as the NYT's Marc Tracy wrote, this moment "is fraught for one of the most prominent global newsrooms in the country, which now has to document the candidacy of its owner, one of the richest men in the world."

Micklethwait said Bloomberg News would continue to report on the 2020 campaign, but would not "investigate" Bloomberg or his Dem primary rivals. He wrote: "We will continue our tradition of not investigating Mike (and his family and foundation) and we will extend the same policy to his rivals in the Democratic primaries. We cannot treat Mike's Democratic competitors differently from him."

Trump is still fair game for investigations because he is running the government. If Bloomberg somehow becomes the Dem nominee, newsroom management will "reassess" these rules.

Maybe this plan is the least-bad option? Maybe. But it still looks bad. Multiple staffers told me it's "damaging" and "embarrassing." A longtime former exec, though, said "I think Micklethwait is actually handling it pretty well."

These decisions are complicated, no doubt. Bloomberg's "long-held policy is that the organization doesn't investigate its owner's wealth, personal life, family and so on," WaPo media columnist Margaret Sullivan wrote Monday. "That was true during his three terms as New York mayor; it wasn't good then either, but the stakes are far higher now."

Bloomberg's DC bureau chief Craig Gordon held a Sunday afternoon phone call with staffers to answer Q's and give everyone a chance to process what's going on.

One reporter identified two main sources of frustration: One, that Bloomberg isn't "explicitly stepping away from the company and making a statement about editorial independence" while running for office, and two, that the leaders of Bloomberg Opinion are joining the campaign staff.

One of those leaders, Trump biographer Tim O'Brien, has already updated his Twitter bio to say "senior advisor to Mike Bloomberg's 2020" campaign. O'Brien is no longer an NBC/MSNBC contributor, BTW.

There's definitely a range of opinion internally. While people feel uncertain about this new arrangement, one reporter said "I'm extremely cautiously optimistic," expressing confidence that the editors in the D.C. bureau will "operate smartly." The reality is that most, or all, of the stories Bloomberg has published about the 2020 race would still be published per Micklethwait's plan — even the piece about Tom Steyer's coal investments.

But there's now a cloud hanging over what Bloomberg News covers, and what it doesn't cover, during the 2020 campaign...

Shout out to Mark Niquette...

He's the Bloomberg reporter assigned to cover the Bloomberg campaign. His stories have included the same skeptical notes that other news outlets' stories have had. For example, he wrote that "Bloomberg faces significant hurdles in the campaign, including his late start and questions about why a billionaire and former Republican with a past career on Wall Street should be the standard-bearer."