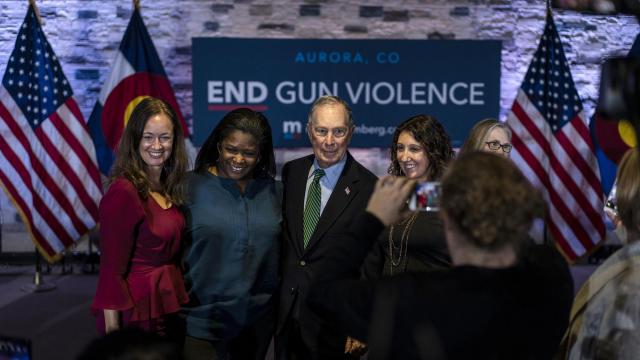 CNN — Democratic presidential candidate Michael Bloomberg on Saturday vowed to "always be a champion" for women in the workplace as new details emerged about his alleged previous comments regarding females at the company he co-founded and owns.

"I've depended on their leadership, their advice and their contributions," he wrote on Twitter. "As I've demonstrated throughout my career, I will always be a champion for women in the workplace."

The Washington Post reported earlier Saturday on several allegations against Bloomberg that he made crude remarks and fostered a culture of discrimination against women at Bloomberg L.P. during the late 1980s and 1990s, citing lawsuits filed against the former New York mayor, depositions obtained under the Freedom of Information Act and witness interviews.

A number of the lawsuits filed against Bloomberg have either been settled, dismissed in his favor, or closed due to the plaintiff's failure to meet filing deadlines, according to the Post.

"Virtually all of this has been reported over the past two decades. In any large organization, there are going to be complaints — but Mike simply does not tolerate any kind of discrimination or harassment, and he's created cultures that are all about equality and inclusion," a spokesperson for the Bloomberg campaign said in a statement provided to CNN.

In 1997, a former sales executive, Sekiko Sakai Garrison, sued Bloomberg and his company, alleging that its male managers and employees "engaged in a pattern and practice of sexual harassment, sexual degradation of women, and discrimination," the Post reported, citing a court document.

She also claimed in the legal complaint that Bloomberg made inappropriate comments to her and other women at the company, including telling her in 1995 when he found out she was pregnant to "kill it," according to the Post. Garrison did not respond to the Post's request for comment.

A former Bloomberg employee, who said he had not previously spoken publicly about the Garrison matter, told the newspaper in an interview that he witnessed the interaction between Bloomberg and Garrison. David Zielenziger told the Post that Bloomberg's behavior toward Garrison was "outrageous. I understood why she took offense."

"I remember she had been telling some of her girlfriends that she was pregnant," Zielenziger recalled. "And Mike came out and I remember he said, 'Are you going to kill it? And that stopped everything. And I couldn't believe it."

Bloomberg has denied Garrison's allegation under oath, the Post noted.

In a statement to CNN, campaign spokesman Stu Loeser said Bloomberg did not make any of the statements Garrison has alleged.

Bloomberg would eventually agree to a confidential settlement with Garrison, according to the Post.

The Post shared a copy of a booklet Saturday that included profane and sexist quotes attributed to Bloomberg. Some of the booklet's quotes were first reported by New York Magazine in 2001.

Former chief marketing officer Elisabeth DeMarse, who had compiled the booklet as a gift to Bloomberg in 1990, declined to comment to the Post. The newspaper noted that DeMarse had signed a nondisclosure agreement.

"Mike simply did not say the things somebody wrote in this gag gift, which has been circulating for 30 years and has been quoted in every previous election Mike has been in," Loeser said in his statement to CNN.

He added, "Mike openly admits that his words have not always aligned with his values and the way he has led his life and some of what he has said is disrespectful and wrong."

The Post noted that a spokesman for Bloomberg had conceded in 2001 that Bloomberg may have said some of the things in the booklet and that the former mayor apologized to "anyone that was offended by" the comments.

In a statement provided to CNN, Bloomberg's campaign chair Patricia E. Harris said in her 26 years working with Bloomberg, he "has always treated women with respect and created work environments where women are on equal footing and can succeed professionally and personally."

"In industries long dominated by men, Mike believes that having women leaders is crucial to any organization's success, and he has backed up that belief with his hiring and promotion practices, as well as his benefit policies," Harris said.

After the Post's article was published Saturday, Bloomberg posted on Twitter, "I would not be where I am today without the talented women around me."