Pittsboro, N.C. — A giant Black Lives Matter billboard has popped up beside a large Confederate flag alongside a highway in Pittsboro.

"Now, when you come off of 64, the first thing you see is the billboard rather than the flag," said one viewer. "Although the flag is still very visible."

Both the flag and now the billboard have each caused quite a stir in Pittsboro, a city that has notably been the site of many protests for several months. In September of 2019, the Virginia Flaggers and ACTBAC put up a large Confederate flag off U.S. Highway 64 Business, and said they were preparing to put as many as five Confederate flags around the county.

Kerwin Pittman, a community rights activist and a sponsor for the billboard, said the Confederate flag is intimidating to many and he wants to change that by putting up this message.

“As a Black man, It makes me feel like I’m not wanted in this town,” he said.

Pittman is hoping the billboard will mean something, and will spark a change.

He believes this sign says something powerful: "We are here and we are not going anywhere." 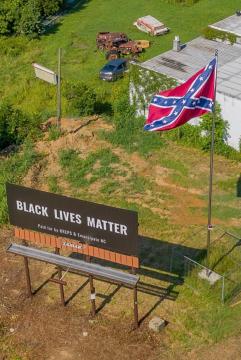 Sam White, who owns both the flagpole and the billboard, said he agreed to unfurl the Confederate flag last year after crews removed a Confederate statue that stood in front of the Chatham County Courthouse in the city.

“Friends called and asked if they could put a Confederate flag on my property," White said. He says they did it “because the county commissioners had removed the Confederate statue.”

White has leased the billboard to Lamar Advertising, which sent representatives to notify him before putting up the Black Lives Matter sign on it.

“They wanted to know how I would react to it, and I told them I would not want a Black Lives Matter sign on that billboard,” he said. “And if they did there would be repercussions.”

White said company representatives told him they would notify him before putting it up, but went ahead and did it anyway without telling him in advance. He now wants the sign removed when company's lease expires at the end of August, but the company said it has until the end of September to remove it, White said.

Pittman said that when the billboard was unveiled on Monday, a group of Confederate flag supporters was yelling at people and harassing them as they took photos with the sign.

Some of the past protests have become violent. Just last month a brawl broke out between a group protesting a Confederate monument and a group that wanted to see the monument protected. Several people were hurt. One person was charged. ​

According to officials, members of the Pittsboro community funded the Black Lives Matter billboard. So far, the money raised will cover costs for one year – which is about $6,000 dollars.

“We’re not going to take people being harassed in this town and we will continue to come down there and demonstrate and protest. Whatever we need to do to stop these racist individuals from doing their racists acts against these citizens of this town," said Pittman.

Pittman said they’re taking their message to Raleigh, too. Soon, you may see these signs here as well.