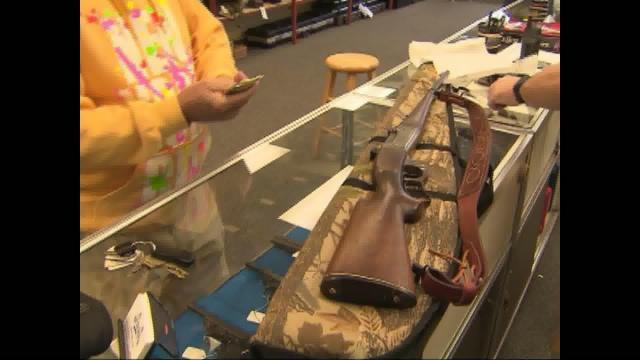 Gun sellers did brisk business on the biggest shopping day of the year, providing a respite from a year-long slump under the Trump administration.

RTSP, a gun store and range in Randolph, New Jersey, surpassed last year's Black Friday for sales, and that carried through the weekend for the store's highest-grossing week since February, said Rick Friedman, the CEO.

SharpShootersUSA, a gun store and range outside Atlanta, beat last year's numbers and at a higher profit margin.

Deets said his biggest sellers included handguns from Glock and Smith & Wesson's M&P line, as well as the Shockwave from Mossberg, a pump-action pistol grip shotgun designed for home defense.

He said he also sold a lot of ammunition in popular calibers like 9-millimeter, which is generally used in semiautomatic handguns, and .223, which is used in AR-15s.

Gun sales have slumped since the presidential election. With President Trump in office and Republicans running Congress, the prospect of tighter federal gun control receded. That had driven sales under the Obama administration and during Trump's campaign against Hillary Clinton.

It's too early to say whether the strong Black Friday sales indicate a reversal of the weak year for sales, said Rommel Dionisio, gun industry analyst for Aegis Capital Corp.

That's because "there were aggressive discounts and promotions being run on Black Friday by major industry players such as Remington," he said.

Retailers like Cabela's, which decorates its stores with big game trophies like moose and elephants, and gun and ammunition companies like Freedom Munitions, Standard Manufacturing and Slide Fire, are also offering sales through Cyber Monday.