Sampson County, N.C. — It's been one year since a Sampson County couple welcomed their first child into the world.

Kasey Hall never got to hold her little girl in the delivery room. At delivery, there was no crying. Tiny Kyleigh's body was blue. She had to be rushed to the ICU. She wasn't breathing.

When her parents finally got to see her, to hold her, many hours later, she had tubes and tape and wires affixed to her. 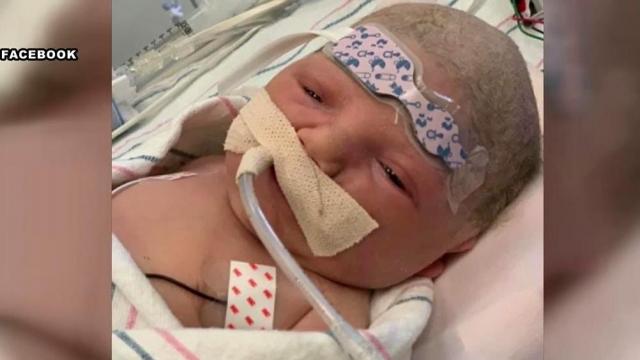 Kyleigh Hall had a rare heart disease called Tetralogy of Fallot, which causes oxygen-poor blood to flow throughout the body. She was also missing her pulmonary valve.

Kyleigh's parents, Kasey and Aaron Hall, had to see their baby girl on a ventilator for weeks.

What Kyleigh needed was open-heart surgery, but the doctors had their doubts.

"She was so small. They didn't think she was strong enough to go through it," said Kasey Hall.

For months, Kyleigh lay in Duke University Hospital, with her tubes and tape and wires.

Her breathing would stop.

The Halls steeled themselves to let go.

"A lot of prayers and a lot of holding each other," he stated.

On July 3, to observe Kyleigh's birthday, a parade of well-wishers honked by – a sheriff's car, a fire truck. Watching it all was Kyleigh, in pretty pink dress.

She'll have ongoing care of course. With the pandemic, she can't leave the house but for doctor's visits.

"She's a normal baby. She acts like a normal kid," said Kasey Hall.

Aaron Hall added, "It fills me up with nothing but joy. It really does."

It is pure joy to no longer see tubes in her face, but a ribbon in her hair.

Kyleigh did get a conduit, or valve replacement, and her parents say she had a great report from her last visit to the cardiologist.