Biopharma manufacturing is a rewarding and meaningful career for many 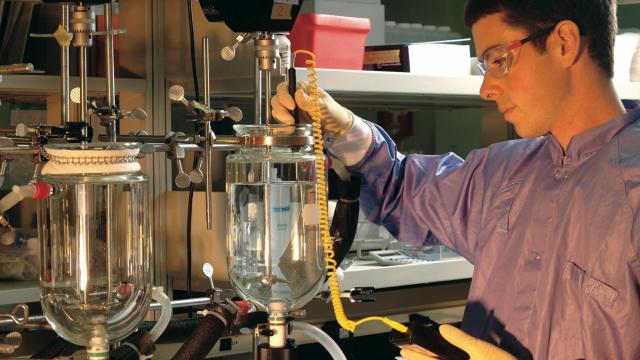 Lifesaving vaccines and medicines. Working with a team. The ability to grow and develop. You'll find all of this and more in the biopharma manufacturing industry.

While many people think biopharma jobs are for those with science degrees, there are opportunities for workers with educational backgrounds of all types. People from all walks of life and professional experiences have found work in biopharma — an industry that is particularly robust in North Carolina.

Beyond the availability of biopharma jobs, these jobs also offer starting and average salaries that exceed the norm in the rest of the private sector statewide. This provides both financial security and opportunities to grow and advance. Many biopharma jobs pay between $48,000 and $60,000 to start, with potential average earnings of $100,000.

Job security and liveable wages are both appealing aspects of biopharma roles such as process technicians, quality control associates, and engineers. However, doing meaningful work that can potentially save lives is the cherry on top for many who have chosen to pursue jobs in the industry.

"In the military, we're serving our country to protect American citizens and their rights. From a meaning perspective, you find a lot of veterans who get out of the military searching for meaning and camaraderie," said military veteran James Benton, a logistics intern at pharmaceutical company Seqirus which produces influenza vaccines. "With biopharma, there's a meaning and purpose. At Seqirus, we are making individual products that can save someone's life. There's a purpose, mission and meaning behind that."

Contributing to lifesaving research and development is also what fuels Oneal Campbell when he goes to work every evening as a night shift chemist at Grifols, a Spanish multinational pharmaceutical manufacturer with a large factory in Clayton.

"Grifols uses blood plasma to make therapeutic drugs for people who have immune system deficiency," said Campbell. "I gain satisfaction and feel accomplished knowing that I'm helping people. Grifols makes therapeutic medicines for the entire world. So when I go to work, just knowing that the product I'm working on is going to help somebody — that makes my day."

Campbell's inspiration to do meaningful work was spurred by the loss of his sister to sickness in his native Jamaica, which took a devastating toll on his entire family. Campbell believes that if his sister had had the medicine she needed, her life could have been prolonged.

"When it comes to medical resources, the U.S. has all the big pharma companies here and drugs are affordable, but in Jamaica it's very expensive to get the medicine you need. If you don't have money, you're going to die. So, I saw my sister die right before my eyes. I thought that if she was in America, maybe she wouldn't have died, or at least, not gone as quickly," said Campbell. "I realized that by working in a pharmaceutical company, I'd be able to do work that would make people's lives better. Seeing the pain that my sister went through — I wouldn't even want my worst enemy to go through that."

For Daniel Onuoha, pivoting his career focus from becoming a pharmacist to being a bioprocess engineer was "the best decision." Onuoha currently works at Novartis Gene Therapies where he monitors the bioreactor process. He runs experiments that grow cells that eventually go on to help patients with rare and life-threatening neurological genetic diseases.

Onuoha is even pursuing another master's degree in micro biotechnology because he wants to achieve more in the biopharma sector.

"I promise you, this career is not as difficult as people make it out to be and it's always fulfilling at the end of the day," said Onuoha. "I feel like I have an opportunity to make a direct impact on the drugs compared to just dispensing them."

Having a direct impact is something John Balchunas, workforce director for the National Institute for Innovation in Manufacturing Biopharmaceuticals, echoed as important.

"In this day and age, just having a job isn't enough. People want jobs that are rewarding and meaningful," said Balchunas, who is also an assistant director of Professional Development Programs at the Biomanufacturing Training & Education Center at North Carolina State University. "When it comes to things like gene therapy and other technologies that are taking off — you're talking about curative therapies and developing products that will not just treat a disease, but get rid of it. When I talk to people who are working in the industry, most of them are very passionate about why they're in it and it's not for the money. It's for the fact that they're actually making a difference."