Bind Me Up; Set Me Free 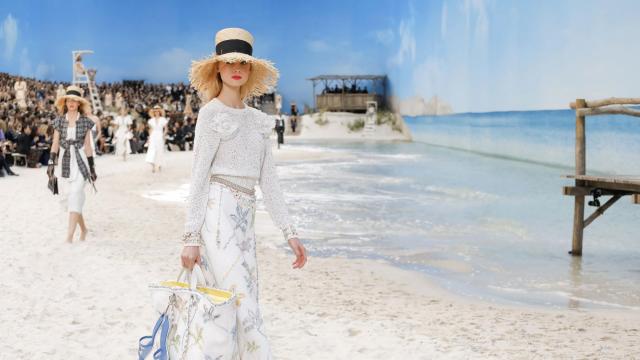 PARIS — There was a beach inside the Tennis Club de Paris.

There was sand; a red, white and blue-striped boardwalk; a pastel seersucker palm tree; and a few tall, white lifeguard chairs. But this wasn’t the Côte d’Azur, or even Miami. We were in Nantucket. Or Hyannis Port, or Martha’s Vineyard, or some other New England seaside idyll.

We were there with a quartet of male garden gnomes in gray seersucker skirts, a golden-gowned mermaid, an iridescent jellyfish and a sea gull in a feather-bedecked knickerbocker suit.

We were there with lobsters and whales and the totems of the preppy experience. With picnic plaids and picnic foods (watermelon, bananas, cherries). With women in towering shoes so vertiginous their legs shook as they minced, ever so slowly, around the room.

With women laced so tightly into their incredibly elaborate jackets and gowns that their arms were bound to their sides, immobile. With women in hybrid garments woven and embroidered and pieced in the most painstaking, intricate ways, their various constituent parts (such as arms and legs and backs) laced together so they could be undone and mixed and matched at will.

With women in sickening sweet pastels, whose faces were hidden by Freddy Krueger fruit-colored masks.

Welcome to Thom Browne’s coast. It’s an unsettling place. This season more than any other. So’s the world around it, of course.

It would be nice to say that Browne’s show was commentary on that world: on the way women have been trussed up, silenced. That the collection took fashion’s penchant for escapism via clothes and weaponized it. That it wasn’t done for effect, or because the designer was overly enchanted by his own imagination.

But Paris is a city that rewards fantasy, and Browne is a designer who revels in a surrealist dreamscape. The work was dazzling; one dress was covered in thousands of hand-cut chiffon paillettes like a pointillist painting. Whether it was also genius cultural and political satire was hard to know for sure. After all, in the end the women were not set free. They did not swim off into the sunset. They did not find new modes of self-expression. They didn’t get a chance to laugh at the absurdity of it all, which has always been the transcendent hallmark of Browne’s work. Which dangles the disturbing suggestion that this was either decorative nihilism (it can’t have escaped the designer how putting a black model in a watermelon hat might make viewers feel) or art for art’s sake: Look what I can do!

And that is not fashion. That’s self-indulgence.

Sometimes, it’s simpler when the goal is just nice clothes. When no issue is being forced, but problems are being solved. Like, for example, what to do when you are wearing a big, swingy jacket and don’t want it flapping around in the breeze? It’s an issue; Stella McCartney fixed it.

Both women’s and men’s suiting sported a cross-body strap at the jacket neck that attached to the opposite side and kept everything nicely in place without looking too buttoned up. Clever. Just like the zippers she opened to create undulating ruffles along the front of casual sweats, and trumpetlike curves at the hem of stretch jersey dresses that could be zipped down for a less flirty line.

They were easy to like, as were the flowery shrunken twin sets and matching pencil skirts at Altuzarra, sweaters buttoned onto the shoulders of Brigitte Bardot crop tops so arms could be bared at will (though the collection as a whole played in a minor key; the designer, Joseph Altuzarra, could stand to be a little more ambitious). The 1930s aviator silhouettes at Givenchy, however, where the gender-fluid Swiss writer Annemarie Schwarzenbach led the designer Clare Waight Keller on an optical illusion exploration, were somewhat more challenging.

Jackets were layered two at a time, with a shrunken cropped style atop a longer narrow one, both shown with voluminous high-waisted desert trousers; prismatic swirls of flowers on flowing jersey suggested classically feminine shapes without actual body-confining seams; and fantastic silver-strewn red carpet gowns — very much in the vernacular of Waight-Keller’s recent couture — were reflected in matching silver trousers and jackets for men. Though despite the inspiration, and a few trouser shapes, this was not a collection where menswear and womenswear were interchangeable.

That kind of melded family is the province of Chitose Abe as Sacai, whose first principles are always of amalgamation: not just of feminine and masculine, but of shape and prototype. This time around that meant military capes-met-tuxedo-jackets-met-silk-draping-met-lace. Denim met khaki, tartan met Fair Isle, and the drapes of a jacket tossed on the shoulder or tied at the waist bled into tailored sides. It was inventive, as always, but also exhausting.

Which is why it is so enthralling when a brand can marry fantasy and a covert cultural point in such a relaxed way you don’t even realize what’s happening.

This is the gift of Pierpaolo Piccioli at Valentino, whose fecund imagination produces the most rococo embroidery in sequins, velvet and lace — and then collages it together like Matisse and puts it on a T-shirt dress. Who takes fan pleating of the most elitist kind and makes it basic, like a smock. Who puts feathers on the hem of a gardening tunic (also on sneakers and espadrilles, though they were removable) over some flared trousers and tops it all off with a giant rattan hat. Who makes a black lace pajama suit, not in Chantilly but in cotton.

Who rejects the idea of escape as inspiration, because he thinks you should be free to find it at home, in your closet or your mind, no matter. Who thinks a lot about the end user. Who makes clothes that range from the minimalist — the simplest black tux or red taffeta bubble — to the maximalist (those embroideries), but that either way are defined by one essential quality: generosity.

We could all use some more of it.