Billy Graham to lie in honor at US Capitol

Charlotte, N.C. — Evangelist Billy Graham will lie in honor at the U.S. Capitol for two days before his funeral next week, officials said Thursday.

Graham died Wednesday morning at his home in the mountain town of Montreat. He was 99.

House Speaker Paul Ryan and Senate Majority Leader Mitch McConnell sent a letter to Franklin Graham on Thursday to request that the family allow as many people pay their respects to his father in recognition of his "long and distinguished service to the nation." 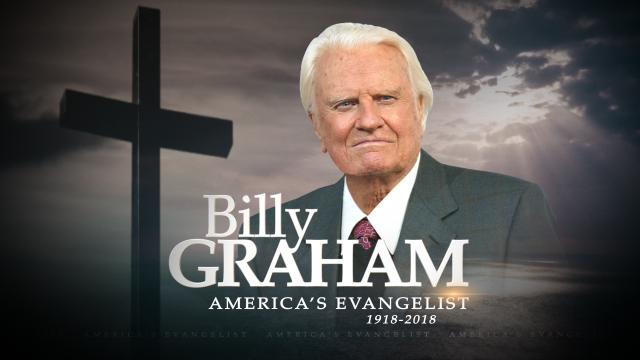 Listen to him preach

Images of him through the years

Timeline of his life

During his career, Graham preached in person to an estimated 215 million people in 185 countries and territories worldwide. He also served as a counselor to U.S. presidents for more than six decades.

Civil rights icon Rosa Parks was the last person to lie in honor at the Capitol in 2005. The only others to receive such recognition were two Capitol Police officers killed in the line of duty in 1998.

Graham's viewing in the Capitol rotunda will occur next Wednesday and Thursday and will include a bicameral congressional service.

Graham is set to be buried next Friday on the grounds of the Billy Graham Library in Charlotte, so officials had to squeeze the Capitol viewing in before that and after two days of public viewing already scheduled for 8 a.m. to 10 p.m. next Monday and Tuesday at the family's restored homestead at the library.

The library closed Thursday and will remain closed until March 5 to prepare for the viewing and funeral.

The logistics involved for the event include a 130-mile motorcade from the Billy Graham Training Center at The Cove, a conference center Graham established near Asheville three decades ago, to Charlotte on Saturday, setting up a massive tent in the library parking lot to accommodate the 2,300 people invited to attend the funeral and handling security for high-profile guests.

The North Carolina Department of Transportation issued an alert Thursday afternoon warning of potential traffic delays on the motorcade route, which will run through Black Mountain and then along Interstates 40 and 85 and U.S. Highway 321 to Charlotte, where it will pass through downtown.

The State Highway Patrol urged people not to park on highway shoulders or overpasses to get a glimpse of the motorcade. Patrol spokesman Sgt. Mike Baker said law Enforcement officers will be staged along the route to help with the expected traffic delays.

"We're expecting the worst, as far as a major crowd, and in the event that doesn't occur, we're ready to proceed as planned," Baker said.

Deputy Police Chief Johnny Jennings said the Charlotte-Mecklenburg Police Department is prepared to handle traffic issues in the city during the motorcade and for the public viewing and funeral next week.

"We know there's going to be some inconvenience. We're asking the public and everyone coming to pay respects to be patient," Jennings said. "We're going to mitigate as much as we can as far as issues related to traffic. However, there needs to be an expectation there will be some traffic issues."

The tent harkens back to Graham's early days leading tent revivals, and workers were already cutting down trees on the library grounds Thursday to set it up. Graham and Cliff Barrows, his late choir director, worked out the details of the 90-minute service a decade ago, family spokesman Mark DeMoss said.

Franklin Graham, who will deliver the sermon at the funeral, spoke on the Today Show on Thursday about some of his father's last wishes.

"He'd want to be remembered as a preacher.," Franklin Graham said. "When my mother passed away, we knew what she wanted on her tombstone. So, I asked my father, so there wouldn't be any arguing among his children, 'Daddy, what do you want on your tombstone?' He thought about that, and he said, 'Preacher.' So, that's what's going to be on his tombstone – Preacher."

President Donald Trump and five former presidents are among those who have been invited to the funeral. CMPD has been planning a long time for Graham's funeral and is prepared to coordinate with other federal, state and local law enforcement agencies to provide added security during the event, Jennings said.

"We have some experience in this. We've handled a lot of presidential details," he said, noting a number of officers will be brought in to work on their off days.

"Our people are going to step up to the plate, and they're going to work these events and do what we have to have done, whether it means not be able to take a day off or cancel a vacation day or something like that or work extra hours," he said.

Baker said state troopers and other law enforcement officers gladly gave up vacations and days off to help with the event.

Graham will be buried next to his late wife, Ruth Bell Graham, who died in 2007.

"It will be their grave site, and that one patch of grass is sitting there waiting for him to lie there," library visitor Sandra Corley said. "Like he said, 'Christ is in heaven, and Ruth is in heaven,' and he said, 'One day, I'm going to be in heaven.'"

Even though the library is closed, it didn't stop people like Corley from stopping by to pay their respects.

"The things that stand to me is that he loved everyone," Rena Wilson said. "He broke down so many racial barriers. He talked about love. He pointed everyone to Christ. He was such a humble and grateful servant."

People also flocked to the chapel at The Cove, where Billy Graham's body was taken Thursday afternoon and where his family will hold a private service on Saturday before the motorcade to Charlotte.

"Even though I know that he's gone, I still feel his presence as I walked through the chapel and seeing all the memories," said visitor Isaiah Johnson, an Iraq War vet who said he finds comfort at the chapel.

"You can just feel God’s spirit," Miller Abernathy of Lincolnton said. "God’s good all the time. We’re just good some of the times. We need to work on it more."

Ruth Graham insisted that the chapel's 87-foot steeple be tall enough to see from I-40 so it could serve as a beacon of hope for passersby, tour guide Barbara Mitchell said.

"She and Billy had prayed over this property, that it would be a place where men and women could come and be trained in God's word," Mitchell said.

Graham's eldest daughter, Gigi Graham, was among those who stopped by. She called the stone chapel one of her parents' favorite spots, noting her mother treasured her time walking among the mountain trees and flowers.

"I felt like I wanted to be here to honor the people that come to honor him because they're the ones he ministered to all his life," Gigi Graham said. "I just want to give back a little love to them."

Gov. Roy Cooper ordered that a condolence book be placed in the State Capitol for the next week, starting Friday, so people can sign in remembrance of Bill Graham.