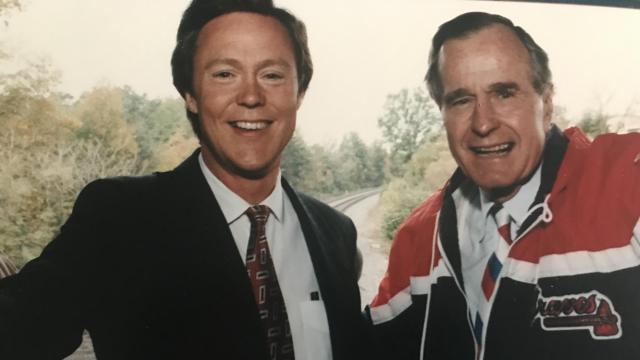 I’ve always loved trains. I met President Bush on one in 1992. It was near Gastonia. Bush was campaigning hard using the old-fashioned whistle-stop tour approach of his predecessors.

This was my first one-on-one interview with a president. I was only given a few minutes so I carefully crafted a few questions that I thought were relevant to North Carolina. They had to be tough questions. You don’t lob softballs to the leader of our country.

I remembered seeing a sign protesting the Bush visit on the way down to Charlotte. I can’t recall the exact wording of the poster but it had to with the sinking economy and the loss of hundreds of factory jobs in North Carolina. I felt sure it was the type of question that would stump even the President. How foolish I was.

When the moment came for me to step aboard his train car, President Bush smiled and gave me a hearty handshake. We began with a bit of small talk. He told me how much he liked the Triangle. I told him how much I enjoyed interviewing his wife Barbara for 15 minutes a few months earlier in Houston.

Then I launched into my questions. President Bush didn’t flinch. He wasn’t defensive at all. He answered even my toughest question with precision and grace.

He told North Carolinians that “if you stick with me,” the economy will recover and better days will be just around the corner.

Of course, we all know that Bush lost the election in 1992 to Bill Clinton with a sagging economy considered the key issue.

President Bush was warm and kind when I met him. I really liked what he said later: “Politics doesn’t have to be mean. Bill Clinton beat me like a drum in the election but that doesn’t mean we can’t be friends.”