Big catch on NC coast also has a big bite 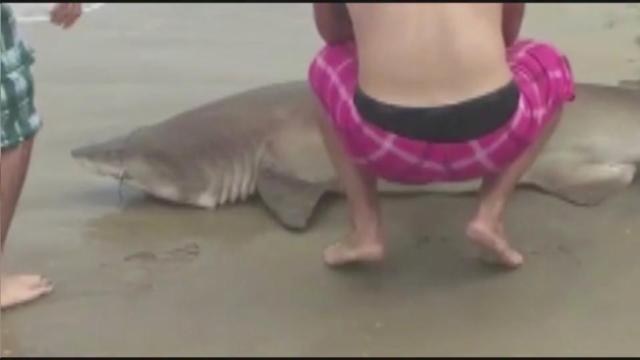 Currituck County, N.C. — Tommy and Jessica Montagna were concerned about shark attacks before visiting the Outer Banks from Freehold, N.J.

The Montagnas were at Carova Beach on Friday when Tommy Montagna noticed two men who were fishing near them struggling with a big catch.

“I grabbed my friend Garrett and said 'What do you think,” he said. “’You think he's got something big on there?' We were unsure.”

The catch turned out to be a shark, which brought Jessica Montagna to tears.

“They were boogie boarding all week and we had no idea that something so big and so deadly would be swimming right around us,” she said.

Six reported shark attacks have occurred on the North Carolina coast so far this year. The most serious injuries were suffered by a 12-year-old girl and a 16-year-old boy, each bitten June 14 about an hour apart off the coast of Oak Island. Each had an arm amputated.

The men took a few pictures with the shark at Canova Beach, then released it into the water.

Before the big catch, the men caught smaller sharks throughout the day, the Montagnas said.

While visiting the North Carolina coast is a tradition the Montagnas will continue, their future trips will involve a little more caution.

“I would go back…I might make sure (the children) stay in the pool area,” Jessica Montagna said.