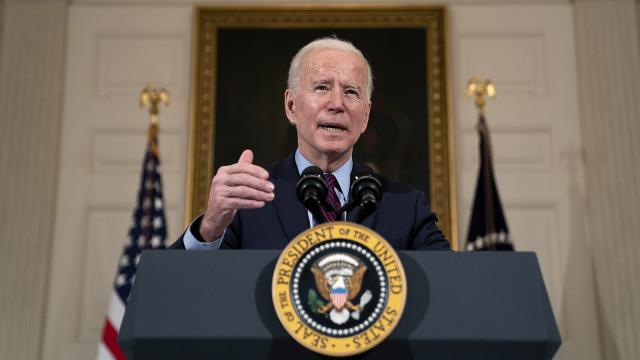 CNN — President Joe Biden announced Wednesday that the Department of Defense has established a task force focused on US strategy towards China.

"We need to meet the growing challenges posed by China to keep peace and defend our interests in the Indo-Pacific and globally," Biden said in his first visit to the Pentagon since taking office.

The President continued: "Today I was briefed on a new DoD-wide China task force that Secretary Austin is standing up to look at our strategy and operational concepts, technology and force posture and so much more."

Biden said the task force would draw on civilian and military experts across the Department of Defense and will provide recommendations to Austin "within the next few months" on "key priorities and decision points."

"It will require a whole government effort, bipartisan cooperation in Congress, and strong alliances and partnerships. That's how we'll meet the China challenge and ensure the American people win the competition of the future," Biden said.

The trip came as Biden forges ahead with his agenda while his predecessor former President Donald Trump faces an impeachment trial in the Senate.

Biden and Vice President Kamala Harris met with Austin and other senior military and civilian leadership during the visit. After delivering remarks, the President and vice president will tour the African Americans in Service Corridor, according to the White House.

Ahead of Biden's visit the White House said he would "pay special tribute to the rich history of Black service members," press secretary Jen Psaki said, noting that the trip coincides with Black History Month.

More than 40% of active-duty forces are men and women of color, Psaki said. She said Biden would also thank service members for their role in protecting the nation. His visit comes as the Pentagon is grappling with racism and extremism in the services, an issue Austin has made a priority.

The trip to the Defense Department was Biden's second Cabinet agency visit, following a trip to the State Department. Last week he met with Secretary of State Antony Blinken and delivered his first major foreign policy and national security remarks as President.

The Senate voted to confirm Austin last month. In his first few days in the role, Austin has focused on internal issues within the military, including by announcing a staggered pause and review of domestic extremism within the ranks, known in the military as a stand down.

He also has directed the Pentagon to tackle sexual assault and to review the department's numerous advisory boards and committees.

Austin has described the coronavirus pandemic as the "greatest challenge to our country right now," and he has a meeting on Covid every day, according to a senior defense official.

Earlier this week, the Senate confirmed Kathleen Hicks to be deputy secretary of defense. She is the first woman to serve in the role.

Biden's trip Wednesday comes after the Pentagon said last month that the new administration would not commit to a full drawdown of troops from Afghanistan by May because the Taliban have not honored the commitments they made in their deal with the United States.

That agreement, which was negotiated under the Trump administration and signed in February 2020, calls for the Taliban to reduce violence and cut ties with terrorist organizations, among other demands. If the conditions of the deal were met, US forces would leave Afghanistan by May 2021. The US force level in Afghanistan went down to 2,500 troops just days before Trump left office.