Biden says US should remain committed to its allies abroad 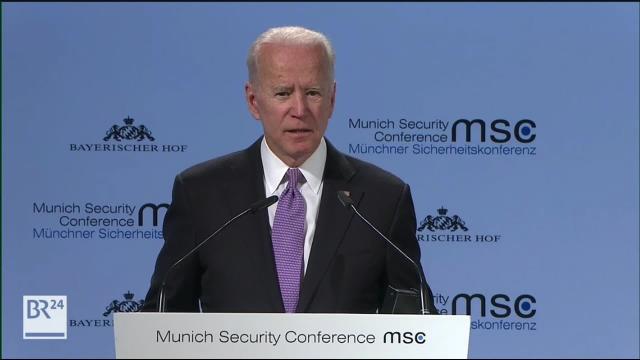 CNN — Former Vice President Joe Biden on Saturday returned to a familiar place on the world stage in his role as a "citizen," assuring political leaders and security experts gathered in Germany that the US should remain committed to its allies despite a perception that the country is "pulling away from the world and our leadership responsibilities."

"The America I see is not in wholesale retreat from the interest and values that have guided us time and again, to be willing to shoulder our responsibility of leadership in the 20th century, and we can do that again. We must do that again," Biden said in remarks at the Munich Security Conference. "The America I see does not wish to turn our back on the world or allies, our closest allies. Indeed, the American people understand that it's only by working in cooperation with our friends that we are going to be able to harness the forces of a rapidly changing world, to mitigate their downsides and turn them to our collective advantage."

Hours before Biden spoke, Vice President Mike Pence also addressed the conference. Though he did not reference the vice president or President Trump by name in his speech, Biden challenged several stances of the current administration, from its views on NATO to refugees.

"I strongly support NATO. I believe it is the single most significant military alliance in the world," he said. "I think it is the basis upon which we have been able to keep peace and stability for the past 70 years. It is the heart of our collective security."

"The America I see values basic human decency, not snatching children from their parents or turning our back on refugees on the border," Biden said to applause.

Biden's speech at the Munich Security Conference comes as he draws closer to a decision on whether he'll run for president in 2020.

During a separate panel on election integrity, Biden, a frequent attendee of the conference, said he has yet to decide if he'll enter the 2002 campaign.

"No, I haven't reached a decision. I am in the process of doing that and I will, in the near term, let everyone know what that decision is," Biden said in a response to a question from CNN. "I think there is a sufficient amount of time to do that. And I think we have a tendency, particularly in the States, to start the whole election process much too early. I think we should be focusing now on what needs to be done to alter some of the policies that are being promoted by the President."

Biden's attendance at the Munich Security Conference gave him an opportunity to showcase his foreign policy acumen as he weighs entering a Democratic presidential primary field that is currently light on national security credentials.

Foreign policy is an area of Biden's career that the former vice president has been quick to promote.

"I've done more foreign policy than I think anybody who's actively around in politics," Biden said during a campaign rally in Youngstown, Ohio, last fall.

Recent talking points circulated by Biden's team tout his foreign policy experience as an asset for a possible campaign.

"He has represented the United States admirably on the world stage, and can look any world leader in the eye with credibility and goodwill," the document reads.

Since leaving office, Biden has not shied away from criticizing President Donald Trump's foreign policy tactics, decrying his treatment of European allies and his approach to Russia, North Korea, and Saudi Arabia in the wake of the murder of Washington Post columnist Jamal Khasogghi.

"I just don't know why this administration seems to feel the need to coddle autocrats and dictators from Putin to Kim Jong Un to you know Duterte. I don't understand it," Biden said in an interview with CBS News last fall. "I don't want to speculate on my worst fears. But, either he doesn't know what he is doing or he has an absolutely convoluted notion of what allows America to lead the world."

Biden's foreign policy resume spans decades. He was a longtime member of the Senate Foreign Relations Committee, including serving as its chair. As vice president, Biden visited nearly 60 countries and took on a White House portfolio that included Iraq, where he traveled eight times, more than any other country as vice president, and Ukraine.

But his decades of experience also come with a long record where his critics could take aim.

In 2002, Biden voted in favor of authorizing the use of force in Iraq, a decision he later said he regretted. It was a vote that animated much of the foreign policy debate in the 2008 Democratic primary, with Biden and Hillary Clinton being among the candidates who voted to authorize the use of force in Iraq while Barack Obama opposed the war.

If he runs, Biden may also face questions about the strategies of the Obama administration, including its approach to Syria.

It's unclear how much of a role foreign policy will play in the upcoming Democratic primary as much of the recent debate has centered on domestic issues. Biden's national security work could set him apart as an experienced hand, but other presidential hopefuls are eyeing ways to beef up and highlight their foreign policy credentials.

Former Colorado Gov. John Hickenlooper also attended the Munich Security Conference, where he gave a talk on "global trade and the future of the Trans-Atlantic alliance," his communications director Lauren Hitt said. He also participated in discussions focusing on cybersecurity, NATO, and military strategy.

Sen. Cory Booker serves on the Foreign Relations Committee while Sen. Kamala Harris is on the Intelligence Committee. Sens. Kirsten Gillibrand and Elizabeth Warren, who delivered a speech outlining her foreign policy vision in November, sit on the Senate Armed Services Committee.

Biden recently told CNN he's in no hurry to make an announcement about a possible 2020 run but has said a decision would come "soon." But over the course of his deliberations, Biden has made one thing clear when it comes to foreign policy.

In London last fall, Biden told CNN, "Not a single aspiring candidate that I can think of for the nomination -- and I am not one at this point -- does not have a better understanding and formulation of American foreign policy than President Trump."