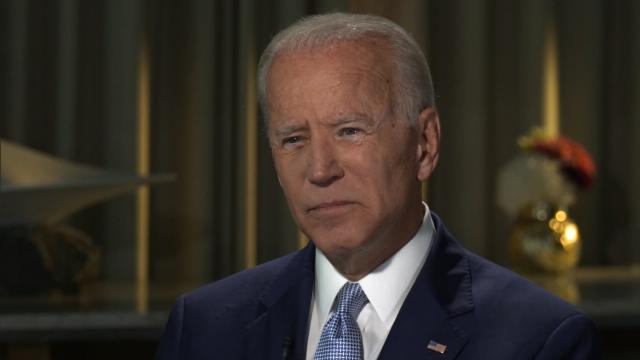 CNN — Former Vice President Joe Biden on Wednesday connected President Donald Trump's racist rhetoric with the mass shooting in El Paso, Texas, saying in a speech that the President has "fanned the flames of white supremacy in this nation."

Biden, speaking in Iowa during a campaign swing days after mass shootings in El Paso and Dayton, Ohio, killed more than 30 people this past weekend, also said he didn't believe the President's condemnation of white supremacists earlier this week.

"His low-energy, vacant-eyed mouthing of the words written for him condemning white supremacists this week I don't believe fooled anyone at home or abroad," Biden said.

Biden is casting the stakes of the 2020 election as a test of the character of the nation and its electorate. His speech on Wednesday -- in which he accused the President of aligning himself with "the darkest forces in this nation" -- was one of his most direct and aggressive attacks on Trump's character of the campaign so far.

Trump, who was en route to El Paso from Dayton, responded to Biden's speech in a tweet, calling it "Sooo Boring!" and saying the country "will do poorly with him."

Asked about Trump's tweet after his speech, Biden responded, "He should get a life."

In his speech, Biden linked Trump's anti-immigrant rhetoric to the mass shooting in El Paso, where police say the white supremacist accused of killing 22 people on Saturday had posted online a screed warning of a "Hispanic invasion."

"How far is it from Trump saying this is an invasion, to the shooter in El Paso declaring, quote 'this attack is the response to Hispanic invasion of Texas,'" Biden asked the crowd. "How far apart are those comments? How far is it from white supremacists and Neo-Nazis in Charlottesville, Trump's very fine people chanting, 'you will replace us,' to the shooter at the Tree of Life synagogue in Pittsburgh saying, 'we're committing genocide, Jews are committing genocide on his people.'

"I don't think it's that far at all," Biden said. "It's both clear language and in code. This president has fanned the flames of white supremacy in this nation."

He also said that Trump "has more in common with George Wallace than George Washington" -- referring to the segregationist former Alabama governor who unsuccessfully mounted four bids for president as an opponent of the civil rights movement.

Biden's speech comes at the start of a four-day swing through Iowa as the Democratic 2020 front-runner visits the Iowa State Fair and a party event in north-central Iowa.

He was scheduled to deliver an address on rural economic policy, but changed course in the wake of the week's horrific events. As he has been trying to do for months, Biden sought to frame the moment as a referendum on Trump's presidency as he tries to persuade Democratic voters that he is the strongest candidate to defeat the president.

In his remarks outside the eastern Iowa town of Burlington, Biden compared Trump unfavorably to the four presidents who preceded him: George H.W. Bush, who renounced his National Rifle Association membership amid gun violence; Bill Clinton, who rallied the nation after the Oklahoma City bombing; George W. Bush, who visited a mosque shortly after the 9/11 attacks; and Barack Obama, who sang "Amazing Grace" at a church in Charleston, South Carolina, after a mass shooting there in 2015.

Biden referred to those four as "Presidents who led, who opposed, chose to fight for what the best of American character is about."

"Sadly, we don't have that today," he continued. "We have a president who has aligned himself with the darkest forces in this nation. And that makes winning the battle for the soul of this nation that much tougher -- harder."

"Trump offers no moral leadership; he seems to have no interest in unifying the nation, no evidence the presidency has awakened his conscience in the least, Biden said."Indeed, we have a president with a toxic tongue who has publicly and unapologetically embraced a political strategy of hate, racism, and division."

Biden issued a call to the American public to stand against hate in the absence of Trump's leadership.

"We are almost 330 million Americans who have to do what our President can't. Stand together. Stand against hate. Stand up for what -- at our best -- our nations' best, when we're the best."