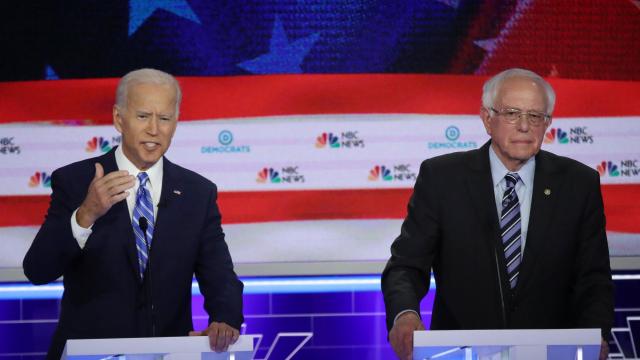 CNN — Joe Biden in a speech on Saturday invoked his time as vice president to Barack Obama to mount a vigorous defense of his record on issues of race and also apologized for comments he made last month about his ability to be civil and work with segregationist senators in the 1970s.

Biden's remarks on Saturday were his most forceful rebuttal to attacks on his record to date, a notable shift that signals the former Vice President acknowledges he will have to engage more directly with the criticism being launched against him from some of his 2020 Democratic rivals than he has done in the past.

He used his speech at an event in South Carolina -- where black voters made up about 61% of the Democratic primary electorate in 2016 -- to respond to criticism he has received from some of his 2020 Democratic opponents on his decades-long record in public office, including his opposition to desegregation busing and his involvement in the 1994 crime bill.

To do so, he pointed to his record on civil rights and accomplishments in the administration of the nation's first black president.

"I was vetted by him and selected by him," Biden said of Obama. "I will take his judgment of my record, my character, and my ability to handle the job over anyone else's."

Biden cast his career as a US senator in the context of a changing America and acknowledged he had changed as well.

"America in 2019 is a very different place than the America of the 1970s. And that's a good thing," Biden said. "I've witnessed an incredible amount of change in this nation and I've worked to make that change happen. And yes -- I've changed also."

"If you look at the issues I've been attacked on, nearly every one of them is for something well before 2008. It's as if my opponents want you to believe I served from 1972 until 2008 -- and then took the next eight years off. They don't want to talk much about my time as Vice President," Biden added.

At a fundraiser in June, Biden recalled being a member of the Senate in the 1970s with Southern Democrats who opposed civil rights and desegregation, noting that while he disagreed with them, "there was some civility" and "we got things done." On Saturday, Biden said he regrets making those comments.

"Was I wrong a few weeks ago to somehow give the impression to people that I was praising those men who I successfully opposed time and again? Yes, I was. I regret it," Biden. "I'm sorry for any of the pain or misconception I may have caused anybody."

His Saturday speech comes after California Sen. Kamala Harris confronted him at the first Democratic debate about his comments on working with segregationist senators, as well as his past opposition to desegregation busing.

Biden told CNN in an exclusive interview that aired Friday that his stance on busing was taken out of context and that he wasn't expecting Harris to attack him the way she did. When excerpts of his speech were released on Saturday, Harris spokesperson Ian Sams tweeted, "every candidate's record will (and should) be scrutinized in this race," adding, "It's a competition to become President of the United States. There are no free passes."

New Jersey Sen. Cory Booker, another 2020 Democratic contender, brought the issue to the forefront after Biden's comments on working with the segregationist senators, calling on the former vice president to apologize and saying Biden was "wrong" for using those relationships as examples of how to bring our country together."

Booker had also taken issue with Biden's use of the word "boy" while talking in the past.

"These are the kind of things that do cause hurt and harm," Booker told CNN soon after Biden's initial comments.

On Saturday, Booker responded to Biden's apology, saying, "First I want to say thank you. We are at a point in our country where we need our leaders to be able to speak towards race issues without falling into a defensive posture or shifting blame. I can't believe when that first sprouted up that Vice President Biden said I should apologize. So, I feel a sense of gratitude and we all should, I think at least, should give him that gratitude and that thanks."

In his speech on Saturday, Biden also confronted another part of his record that has been a source of criticism from his 2020 rivals: His role in passing the 1994 crime bill. Biden said his record on the issue has been "grossly misrepresented" but added that he accepts responsibility for what went right and what went wrong with the legislation.

"In the 1980s and 1990s, violent crime was out of control. The crime bill was designed to deal with that problem. That's why it was supported overwhelmingly by the Democratic party, by African American leaders all across the nation including a majority of the black caucus in the Congress," Biden said.

Biden on war and banking

On Iraq, the former vice president argued that Obama still entrusted him with a portfolio that included the country -- despite Biden's now-unpopular vote to authorize the use of force in 2002.

"I voted to give authority to Bush what turned into the Iraq War, but it didn't stop President Obama from within the first month turning to me to handle Iraq once we took office, giving me the responsibility to coordinate all the agencies. To bring home 150,000 combat troops from Iraq, including my son who spent a year there."

Biden also pushed back on suggestions he may be too close to the banking industry and defended his support for a bankruptcy bill which he famously sparred over with Massachusetts Sen. Elizabeth Warren, who is also challenging for the Democratic nomination.

"The fact of the matter is, I'm not beholden to banks. I supported the bankruptcy bill because I believe taking a very bad bill that was going to pass overwhelmingly and making it better made sense," he said.