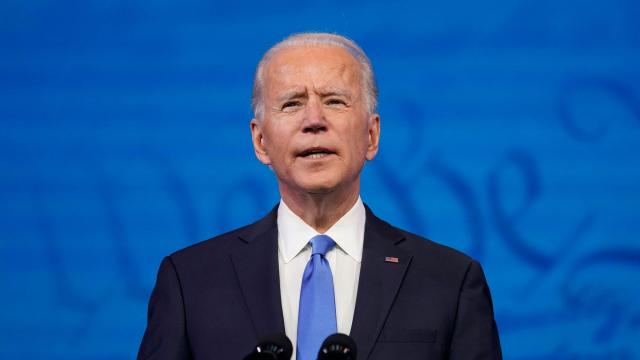 "Today I'm pleased to announce a team that will lead my administration's ambitious plan to address the existential threat of our time, climate change," Biden said at an event in Wilmington, Delaware.

He continued, "Like their fellow Cabinet nominees and appointees, members of our environmental and energy team are brilliant, they're qualified, tested and they are barrier-busting."

The President-elect touted his ambitious climate plan, which seeks to end carbon emissions from power plants by 2035 and proposes broader public investment in green infrastructure, including $2 trillion for clean energy projects. He spoke about creating jobs, modernizing the nation's water, transportation and energy infrastructures, turning the country toward electric vehicles and lowering the nation's carbon emissions.

Vice President-elect Kamala Harris praised the nominees and appointees as some of the country's "most seasoned public servants," and described them as not only experienced and knowledgeable, but also "compassionate leaders."

"Our climate crisis is not a partisan issue, and it is not a hoax," Harris said at the event. "It is an existential threat to all of us, particularly poor communities and communities of color who bear the greatest risks from polluted air, polluted water, and a failing infrastructure."

Here are key lines from the event:

"Growing up in my mother's Pueblo household made me fierce. My life has not been easy. I struggled with homelessness. I relied on food stamps and raised my child as a single mom. These struggles give me perspectives though, so that I can help people to succeed. My grandparents, who were taken away from their families as children and sent to boarding school in an effort to destroy their traditions and identities, maintained our culture."

"This moment is profound when we consider the fact that a former secretary of the interior once proclaimed his goal to, quote, civilize or exterminate us. I'm a living testament to the failure of that horrific ideology. I also stand on the shoulders of my ancestors and all the people who have sacrificed so that I can be here."

"My commitment to clean energy was forged in the fire. I was governor of Michigan, as the President-Elect said, during the great recession when it struck and pushed our auto industry, which is the life blood of Michigan, to the brink of utter collapse. Workers were losing their jobs through no fault of their own, banks wouldn't lend, people were losing their houses. Our unemployment rate in Michigan was 15%, in Detroit it was 28%, but then, thankfully, as now, help was on the way. Joe Biden and the Obama administration worked with us to rescue the auto industry and the million jobs that are attached to it."

"The path to building back better starts with building, and manufacturing, and deploying those products here. Stamping them, made in America, and exporting them around the world. We can win those jobs for American workers with the right policy. We can. And I know what those jobs will mean for both the planet and for those workers and families."

"Growing up as a child, hunting and fishing with my father and grandfather in eastern North Carolina, I developed a deep love and respect for the outdoors and our natural resources, but I also experienced respiratory issues that required me to use an inhaler on days where pollutants and allergens were especially bad. I've always been curious about the connections between our environment and our health. How the world around us contributes to or detracts from our enjoyment of life."

"We're going to ensure that EPA is once again a strong partner for the states, not a road block. We will be driven by our convictions that every person in our great country has the right to clean air, clean water and a healthier life, no matter how much money they have in their pockets, the color of their skin or the community that they live in. We will move with a sense of urgency on climate change, protecting our drinking water, and enact an environmental justice framework that empowers people in all communities."

"I grew up in the working-class community of Waterbury, Connecticut, a town not so different from Scranton, Pennsylvania. I know the faces of the marginalized and I appreciate the challenges of urban pollution. While the words climate change and environmental injustice were not part of the vernacular back then, the evidence of their impacts was all around. In that setting, there was plenty of opportunity to work to make a difference in people's lives."

"It is essential that we deploy smart and humane policy to help communities pull themselves back from the edge and improve the health, security and prosperity of all people. The Build Back Better plan is poised to breathe new life into the Council on Environmental Quality. CEQ will work with a broad range of partners on a broad range of issues to tackle the full breadth of climate change, preserve the natural treasures of our nation, center environmental justice, and help more communities overcome legacy environmental impacts."

"All I can think of is back when I was in grammar school and the nuns used to jump up and say, run, close the windows in your classrooms because when the rubber factory across the street started to spew chemical stenches into the air, it would come wafting into our classroom and that smell kept us from recess more days than I or my teacher ever cared to remember. So I figured out early there was just an intrinsic connection between our environment and our health. And that understanding drew me into a very long career of public service, which I will never regret and always cherish."

"And I did it because I was trying to help families and communities just like mine and those who are facing certainly much steeper and more insidious legacies of environmental harm so they could overcome the challenges that were holding them back. Environmental protection is part of my moral fiber. It's what I live for. And I'm proud of the progress that we've made across the United States and I'm proud of the work that I did for many years at local and state governments as well as at EPA to make sure our air and water were cleaner, to make communities safer and more livable and begin to confront the crisis of climate change. And I'm here today because climate change is not only a threat to the planet, it is a threat to our health and our wellbeing. It's a threat to people everywhere and the precious natural resources that we depend on."

"When my parents moved from Pakistan to Pennsylvania, they brought two little kids and a few suitcases of dreams. Dreams their kids are living today ... my brother, a doctor on the front lines of the Covid crisis, and me, moving to the front lines of the fight against climate change. To be healthy, to have purpose, to be able to give back, that is how our parents taught us to define the American dream."

"I am so grateful to be serving alongside the team you have assembled, grateful for Gina McCarthy, my guide and my good friend. For the incredible and inspiring leaders on this stage and for those with whom we'll partner all across your administration. This has been a trying year for all Americans, marked by so much loss, but throughout, you, sir, have been there for us. And when the pandemic hit closer to home, you were there for me."

Granholm was the first woman to be elected governor of Michigan, and served two terms. As governor of Michigan, Granholm had worked closely with the auto industry, the dominant industry in the Great Lakes State, which could help Biden as he attempts to move the country toward electric vehicles. Prior to being elected governor, Granholm was elected as the state's attorney general in 1998, and was also the first woman to serve in that role.

Haaland would be the first Native American Cabinet secretary if confirmed by the Senate. She is an enrolled member of the Pueblo of Laguna, and also has Jemez Pueblo heritage, according to the biography on her congressional website. Haaland made history in 2018 when she was elected as one of the two first female Native Americans in Congress. Haaland represents New Mexico's 1st Congressional District, which covers most of Albuquerque. In 2016, Haaland traveled to North Dakota to take part in the protests over plans to build a pipeline underneath a key source of water for the Standing Rock Reservation.

Regan has been serving as the secretary of North Carolina's Department of Environmental Quality since January 2017. The agency's mission is to protect the state's environment and natural resources. Regan previously led the Environmental Defense Fund's efforts to combat the impacts of the climate crisis and air pollution, according to the state's government website. He also worked at the EPA during the Clinton and Bush administrations.

McCarthy served as the administrator of the EPA from 2013 to 2017 under President Barack Obama. McCarthy was originally appointed by Obama in 2009 as assistant administrator for the EPA's Office of Air and Radiation. Prior to serving in the Obama administration, McCarthy was the commissioner of the Connecticut Department of Environmental Protection. She has a career that spans decades across state and local levels working on environmental issues. Since January, McCarthy has served as the president and chief executive officer of the NRDC, a nonprofit international environmental advocacy group.

Zaidi currently serves as New York's deputy secretary to the governor for energy and environment and chairman of climate policy and finance. He is an adjunct professor at Stanford University, and co-founded the Stanford-coordinate initiative Lawyers for a Sustainable Economy. Zaidi, who immigrated from Pakistan, has been a longtime adviser to the President-elect on climate matters.

This story has been updated with details from Saturday's event.