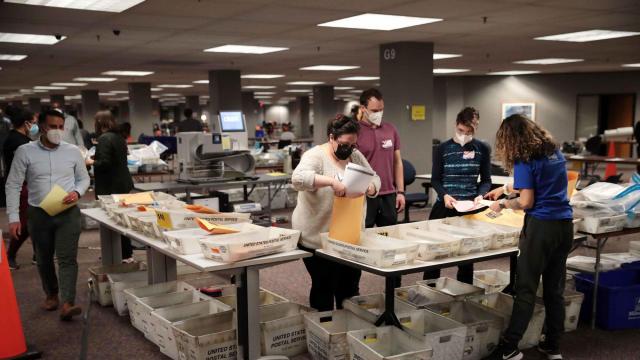 The results showed a net gain of 132 votes for Biden, with President Donald Trump receiving 134,482 votes and Biden receiving 317,527 after the recount, the Milwaukee County Board of Canvassers announced Friday night.

But more than 27,000 ballots that are part of the count are being segregated after two objections by the Trump campaign.

The campaign objected to more than 25,000 absentee ballots cast by individuals who self-identified as "indefinitely confined," which allowed them to vote absentee because of pandemic fears.

The campaign also objected to 2,197 ballots that had been "cured," a legally allowed action in which an election official fills in a missing piece of information on a ballot envelope, often identified because the official did it in a different ink from the voter.

According to the Milwaukee County Clerk's office, the Trump campaign has signaled it will appeal the certification decision, based on the dispute over these segregated votes

The other county that is part of the state's recount, Dane, is expected to complete its recount in the next few days. The state must certify its results by Tuesday.

CNN has projected that Biden will win Wisconsin, flipping the state back to blue after Trump won it in 2016.