Biden opposes defunding the police. Here's what that means 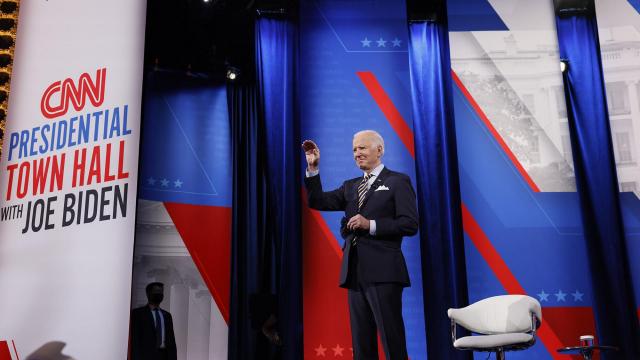 CNN — President Joe Biden said at a CNN town hall on Tuesday that he remains opposed to calls for "defunding the police" -- a rallying cry for activists seeking reforms in law enforcement.

In response to a question about how to avoid overly constraining police while addressing racial disparities, Biden replied, "By number one, not defunding the police."

Biden's comments run counter to those who argue the solution to police brutality is to redirect city budgets toward community programs.

It's as straightforward as it sounds: Instead of funding a police department, a sizable chunk of a city's budget is invested in communities, especially marginalized ones where brutality occurs.

Biden's published criminal justice plan called for a $300 million investment in community policing efforts -- including the hiring of more officers. His transition team met with the Fraternal Order of Police in November, and has met with other groups representing law enforcement since.

Defunding the police has been a murmur for years, particularly following the protests against police brutality in Ferguson, Missouri, though it seemed improbable in 2014.

But it's becoming a shout. After the deaths of George Floyd and Breonna Taylor at the hands of police and nationwide protests demanding reform, Minneapolis officials announced their intent to defund and disband the city's police force altogether.

That depends on whom you ask, said Philip McHarris, a writer and doctoral candidate in sociology at Yale University.

Some supporters of divestment want to reallocate some, but not all, funds away from police departments to social services and reduce their contact with the public to reduce the likelihood of police violence.

Those seeking to disband police consider defunding an initial step toward creating an entirely different model of community-led public safety.

The concept exists on a spectrum, and the two aren't dichotomous but interconnected. But both interpretations center on reimagining what public safety looks like -- shifting resources away from law enforcement toward community resources, he said.

It also means dismantling the idea that police are "public stewards" meant to protect communities. Many Black Americans and other people of color don't feel protected by police, McHarris said.

McHarris says divesting funds can begin the process of ending the culture of punishment in the criminal justice system. And it's one of the only options local governments haven't tried in their attempts to end deaths in police custody.

McHarris grew up in neighborhoods where there were "real, discernible threats of gun violence," and he said he never thought to call the police -- that was for his own safety. Instead, he relied on people within his community who helped him navigate threats of danger.

What if, he said, those people could provide the same support they showed him on a full-time basis?

To explain why he supports the idea, Isaac Bryan, the director of UCLA's Black Policy Center, points to history: Law enforcement in the South began as slave patrol, a team of vigilantes hired to recapture escaped slaves. Then, when slavery was abolished, police enforced Jim Crow laws -- even the most minor infractions.

And today, police disproportionately use force against black people, and black people are more likely to be arrested and sentenced.

"That history is engrained in our law enforcement," Bryan said.

Where would those funds go?

Defunding law enforcement "means that we are reducing the ability for law enforcement to have resources that harm our communities," Cullors said in an interview with WBUR, Boston's public radio station. "It's about reinvesting those dollars into black communities, communities that have been deeply divested from."

Those dollars can be put back into social services for mental health, domestic violence and homelessness, among others. Police are often the first responders to all three, she said.

Those dollars can be used to fund schools, hospitals, housing and food in those communities, too -- "all of the things we know increase safety," McHarris said.

Disbanding police altogether falls on the more radical end of the police divestment spectrum, but it's gaining traction.

MPD150, a community advocacy organization in Minneapolis, focuses on abolishing local police. Its work has been spotlighted since the death of George Floyd in Minneapolis Police custody.

"The people who respond to crises in our community should be the people who are best-equipped to deal with those crises," the organization says.

Rather than "strangers armed with guns," the organization says, first responders should be mental health providers, social workers, victim advocates and other community members in less visible roles.

It argues law and order isn't abetted by law enforcement, but through education, jobs and mental health services that low-income communities are often denied. MPD150 and other police abolition organizations want wider access to all three.

Would defunding police lead to an uptick in violent crimes?

Defunding police on a large scale hasn't been done before, so it's tough to say.

But there's evidence that less policing can lead to less crime. A 2017 report, which focused on several weeks in 2014 through 2015 when the New York Police Department purposely pulled back on "proactive policing," found that there were 2,100 fewer crime complaints during that time.

The study defines proactive policing as the "systematic and aggressive enforcement of low-level violations" and heightened police presence in areas where "crime is anticipated."

That's exactly the kind of activity that police divestment supporters want to end.

Will defunding the police come to pass?

It's radical for an American city to operate without law enforcement, but the plan is already in motion in Minneapolis.

In June, nine members of the Minneapolis city council announced they intend to disband the city's police force entirely.

"We committed to dismantling policing as we know it in the city of Minneapolis and to rebuild with our community a new model of public safety that actually keeps our community safe," Council President Lisa Bender told CNN.

Bender said the council still needs to discuss what to replace police with, but that the city would funnel money from police into "community-based strategies." She noted, too, that most 911 calls are for mental health services, health and EMT and fire services.

Defunding is simpler than disbanding, though, and at least one mayor's already taken that step. After Californians decried a proposal to increase the Los Angeles Police Department budget to $1.86 billion, Los Angeles Mayor Eric Garcetti agreed to slash between $100 million to $150 million from the proposed funding.

It's not a significant dent in the budget, but it's proof that officials are listening, Bryan said.