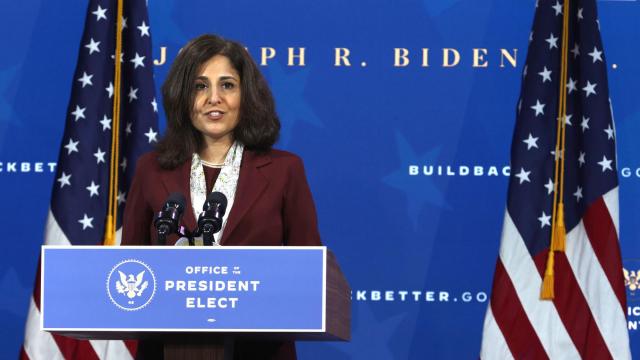 CNN — President Joe Biden's nominee to lead the Office of Management and Budget, Neera Tanden, apologized on Tuesday for some of the criticism she has previously directed at congressional Republicans and expressed regret over past tweets during a Senate confirmation hearing.

Republican Sen. Rob Portman of Ohio questioned Tanden at the Senate Homeland Security Committee hearing about her past comments and asked if she could actually be bipartisan given her track record. Portman read aloud some of the insults Tanden has leveled at various Republican lawmakers, including that "vampires have more heart than Ted Cruz," a senator from Texas, and that Sen. Susan Collins of Maine is "the worst."

Tanden responded with an apology, saying, "I deeply regret and apologize for my language and some of my past language."

Portman later asked if she had deleted many of her tweets in advance of her nomination, and if so, why.

Tanden replied, "I appreciate people's concerns about my tweets and I've regretted them, and I deleted tweets because I regretted my tone, and I've deleted tweets over many months. For those concerned about my rhetoric and my language, I am sorry and I am sorry for any hurt that they have caused."

Tanden has already fielded a wave of criticism from GOP lawmakers over her past tweets slamming Republican politicians. While many of her tweets expressed sentiments common to partisan Democratic operatives, some Republicans have signaled that the tweets are a vulnerability.

In her prepared opening remarks, Tanden vowed that if confirmed she will "vigorously enforce my ironclad belief that our government should serve all Americans -- regardless of party -- in every corner of the country."

Tanden also committed to "work in good faith with all members of this committee to tackle the challenges Americans are facing; to address duplication or ineffective programs; to be responsive to you and your staff's inquiries; and to assist the committee in its important oversight role."

An ally of former Secretary of State Hillary Clinton, Tanden previously served as a senior adviser for health reform at the US Department of Health and Human Services during the Obama administration, where she helped work on the Affordable Care Act.

More recently, she's served as CEO and president of the left-leaning Center for American Progress. Tanden acknowledged in her opening statement that the role of OMB director "is different from some of my past positions" but maintained that she's aware the job "calls for bipartisan action, as well as a nonpartisan adherence to facts and evidence."

"OMB will play a vital role in addressing many of the biggest challenges we face: From beating back the virus to delivering aid that will help ensure a strong economic recovery for all families to ensuring we build back better than before," she said.

Tanden has an additional confirmation hearing before the Senate Budget Committee set for Wednesday, where she'll be answering to Chairman Bernie Sanders, a Vermont independent, with whom she's clashed for years.

But the pair sat down for a lengthy one-on-one meeting in recent weeks, according to two officials familiar with the meeting. One person briefed on the meeting told CNN it lasted more than an hour and that no stone was left unturned, describing it as an opportunity for the two to discuss years of public clashing and private interactions.

Beyond her vow to engage in good faith bipartisan cooperation, Tanden used her opening remarks Tuesday to speak in deeply personal terms about her upbringing, when, she said, her family had "relied on food stamps to eat, and Section 8 vouchers to pay the rent."

"At school, I remember being the only kid in the cafeteria line who used 10-cent vouchers from the free and reduced lunch program. I remember using food stamps at the grocery store," she said

Tanden added later: "As I sit before this committee, I'm mindful that my path in life would never have been possible without budgetary choices that reflected our nation's values -- many of them made in the very agency I am now nominated to lead."