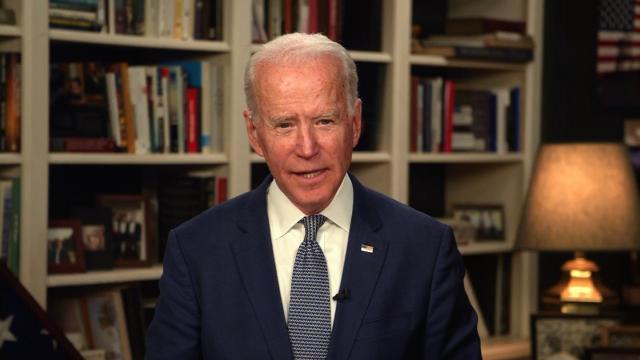 CNN — Joe Biden nearly offered his cell phone number to family members of coronavirus victims on national television Friday night as he discussed the difficulty of not being able to be there for loved ones who are dying.

The former vice president, who is on the verge of claiming the 2020 Democratic nomination to take on President Donald Trump, emotionally recalled the deaths of his first wife and young daughter in a 1972 car crash and of his son Beau from brain cancer in 2015.

"I've lost a couple children. I've lost a wife," Biden said at a CNN town hall. "And it is incredibly difficult to go through, and it's harder to go through when you haven't had an opportunity to be with the person while they're dying."

After noting that he had been able to be with his mother, father and son as they died, he noted that with "my deceased wife, I was not able to do that."

Coronavirus victims are unable to be surrounded by family because the virus is particularly contagious, leading many people to die alone.

"That's one of the cruelest, cruelest things that's happening," Biden said. He described a friend who sits outside the window of her mother's nursing home as the two touch hands through the window. "The human connection is so, so profoundly important. And when you don't have it, you've got to get help."

Biden urged people to "seek help afterwards" and "talk to people who have been through it so ... they can tell you that you can get through it."

Biden then began to give his phone number, but stopped himself.

"You can contact my campaign. I'm happy to try to talk to you," Biden said. "Not that I'm an expert, but just having been there. I'm so sorry for you."