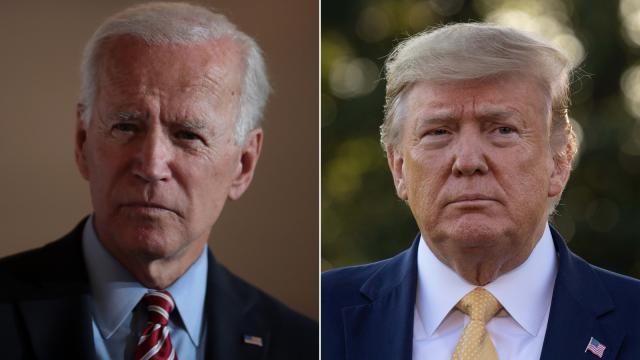 "Like so many people, my faith has been the bedrock foundation of my life: it's provided me comfort in moments of loss and tragedy, it's kept me grounded and humbled in times of triumph and joy. And in this moment of darkness for our country — of pain, of division, and of sickness for so many Americans — my faith has been a guiding light for me and a constant reminder of the fundamental dignity and humanity that God has bestowed upon all of us," Biden said.

"For President Trump to attack my faith is shameful. It's beneath the office he holds and it's beneath the dignity the American people so rightly expect and deserve from their leaders," he added.

The response came after Trump, in his continued effort to tie Biden to the far-left, claimed in Ohio that the former vice president wanted to, "Take away your guns, destroy your second amendment, no religion, no anything. Hurt the bible, hurt God. He's against God, he's against guns."

"I'm not trying to proselytize, I'm not trying to convince you to be, to share my religious views. But for me it's important because it gives me some reason to have hope and purpose," Biden said during a CNN town hall with a grieving pastor who'd lost his wife during the Charleston church shooting.

Earlier on Thursday, Biden's campaign slammed the President for his comments.

"(Biden has) lived it with dignity his entire life, and it's been a source of strength and comfort in times of extreme hardship," campaign spokesman Andrew Bates said.

In his statement, Bates also criticized Trump for clearing peaceful protestors in front of the White House using gas and rubber bullets to take a photo with a Bible in front of St. John's Episcopal Church, as well as using in an attack ad a photo of Biden praying at an African Methodist Episcopal church in Delaware on June 1 following the death of George Floyd.

"Donald Trump is the only president in our history to have tear-gassed peaceful Americans and thrown a priest out of her church just so he could profane it --- and a Bible -- for his own cynical optics as he sought to tear our nation apart at a moment of crisis and pain," Bates said. "And this comes just one day after Trump's campaign abused a photo of Joe Bidenpraying in church to demean him, in one of the starkest expressions of weakness throughout this whole campaign."

Doug Heye, the former communications director for the Republican National Committee and a CNN political commentator, questioned the effectiveness of Trump's attack on Biden.

"We've seen these attacks before and they've just not been effective outside of a very small part of the Republican base," Heye said.

"You've made such over-the-top political attack that questions someone's faith, it's bound to not be effective," he added, saying that such an attack could backfire and even turn a voter sympathetic.

This story has been updated with a statement from Joe Biden.