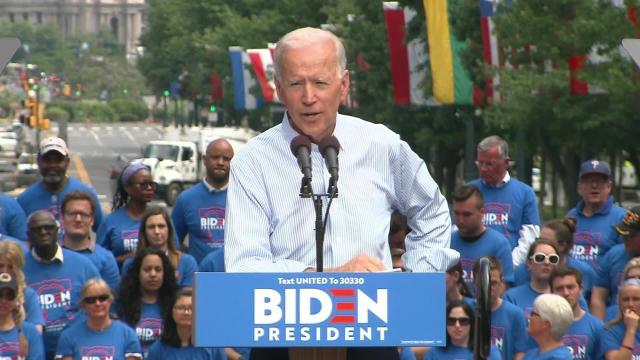 CNN — Joe Biden used the first major rally of his presidential campaign to push back against the idea that Democrats need anger to defeat President Donald Trump in 2020, instead issuing a call for unity and arguing he understands better than any other Democratic candidate the entrenched Republican opposition the party's nominee will face.

"Let's stop fighting and start fixing. And we can only do it together," Biden told a crowd of thousands in a park near the Philadelphia Museum of Art steps made famous by the "Rocky" movies.

His speech was intended to sell a message of overcoming partisan rancor. But Biden also forcefully responded to progressives who have cast his approach as naïve. And he attacked President Donald Trump and congressional Republicans in personal terms.

"Some say Democrats don't want to hear about unity. That they are angry -- and the angrier you are, the better. That's what they are saying you have to do to win the Democratic nomination," Biden said Saturday. "Well, I don't believe it. I believe Democrats want to unify this nation."

Though every candidate has called for unity, other Democrats -- particularly Massachusetts Sen. Elizabeth Warren and Vermont Sen. Bernie Sanders -- have also focused on systemic problems that existed before Trump took office.

"I believe we must acknowledge that the word 'unity' has often been used to shut people up or to preserve the status quo," California Sen. Kamala Harris said in her campaign kickoff speech in Oakland.

And on Thursday in Chicago, South Bend, Indiana, Mayor Pete Buttigieg said, "Any suggestion that our party's message ought to be to promise to return to normal overlooks the extent to which normal hasn't been working for a lot of people.

Despite Biden's calls for unity -- and insistence that "working together matters" -- Biden attacked Trump, who he said is inspiring tyrants across the globe to stifle dissent, and congressional Republicans on several occasions.

He smacked GOP lawmakers for allowing the Trump administration to reject congressional oversight efforts "without a whimper from the Republicans in Congress who know better. They know better."

Touting his time as former President Barack Obama's vice president, Biden argued that he would be capable of actually getting things done while working with many of the same congressional Republicans that he watched for eight years attempt to thwart all of the Obama administration's legislative aims.

He recalled muscling toward the passage of the Affordable Care Act "without a single Republican vote." He pointed to the 2009 stimulus package, which won passage after Biden convinced three Republican senators to back it.

"I know how to get things done, folks," Biden said. "I know how to go toe-to-toe with the GOP. But it doesn't have to be and it can't be that way on every issue."

Biden entered the Democratic race last month and instantly became a stronger-than-expected frontrunner, leading in polls nationally and in the early-voting primary states.

He has so far campaigned on calls for a return to normalcy after a Trump presidency he has said will be viewed merely as an "aberration" if it is limited to a single four-year term.

He also said Trump is taking credit for a strong economy "that was given to him, just like he inherited everything else in his life."

"And just like everything else he's been given in his life, he's in the process of squandering that, as well," Biden said.

Biden didn't delve deep into policy details during the rally. He backed abortion rights, called for free community college and funding for job-training programs, said he supports a "public option" for health coverage like allowing people to buy into Medicare, and previewed a climate policy speech he is expected to deliver before the end of this month.

But on Saturday, for Biden -- who launched his campaign with criticism of Trump's handling of white supremacists and has attempted to bash Trump while winning over some of his voters -- policy talk largely served as another entry into an attack on Trump.