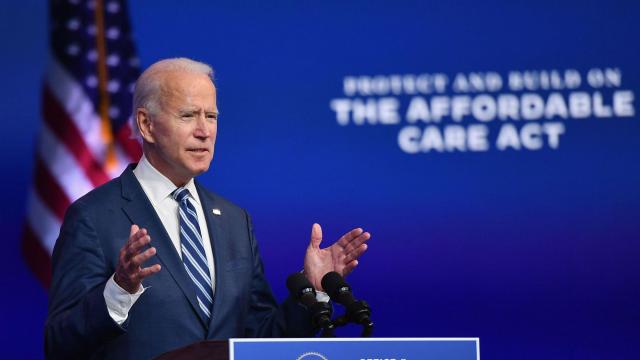 CNN — President-elect Joe Biden's goal is to have his remaining Cabinet selections announced before Christmas, a transition official told CNN, with no plans of delaying any decisions until the outcome of the Georgia runoffs determines control of the Senate.

This is contingent on Biden making up his mind and not delaying decisions on his picks, as he hears criticism and suggestions from outside supporters and advocates.

Several announcements are expected next week. CIA director is expected to be at the beginning of the week, with others grouped together later.

The timing of an attorney general announcement remains unclear, with sources offering conflicting indications of when it will happen. A separate source on Thursday insisted Biden has yet to reach a final decision, but others believe he has. The four finalists are Alabama Sen. Doug Jones, Merrick Garland, Sally Yates and Deval Patrick, with Jones and Garland seen as the top two options.

Meanwhile, on Thursday, the President-elect announced a slate of new Cabinet nominees and picks for top roles in his administration, including Denis McDonough for secretary of Veterans Affairs, Tom Vilsack for Agriculture secretary and Marcia Fudge for secretary of Housing and Urban Development.

Biden tapped Susan Rice, former national security adviser during the Obama administration, as his director of the Domestic Policy Council. The President-elect also announced Katherine Tai, who oversaw trade enforcement for China during the Obama administration, as his nominee for United States Trade Representative. All of Biden's picks announced Thursday except Rice will require confirmation by the United States Senate to serve in their roles.

Biden and Vice President-elect Kamala Harris are expected to introduce these key administration members at an event on Friday in Wilmington, Delaware, the transition team said. CNN had previously reported all of these administration picks.

The picks reflect how Biden is turning to longtime advisers and experts in their respective fields for top posts in his administration. Many have close ties with Biden, and developed relationships with the President-elect while working in the Obama administration.

"This dedicated and distinguished group of public servants will bring the highest level of experience, compassion, and integrity to bear, solving problems and expanding possibilities for the American people in the face of steep challenges," Biden said in a statement.

The President-elect continued, "The roles they will take on are where the rubber meets the road — where competent and crisis-tested governance can make a meaningful difference in people's lives, enhancing the dignity, equity, security, and prosperity of the day-to-day lives of Americans. This is the right team for this moment in history, and I know that each of these leaders will hit the ground running on day one to take on the interconnected crises families are facing today."

Vilsack served as agriculture secretary for the entirety of President Barack Obama's time in the White House. He was unanimously confirmed by the US Senate in January 2009 and served in that post until he stepped down in 2017, shortly before President Donald Trump took office. Vilsack is also the former governor of Iowa -- in 1998, Vilsak became the first Democrat elected governor of Iowa in more than 30 years. He served as governor from 1999 to 2007.

McDonough was a longtime chief of staff to former President Barack Obama. He served as chief of staff during Obama's entire second term and also worked as deputy national security adviser. McDonough developed a close relationship with Biden while serving in both positions. He also chaired the National Security Council's Deputies Committee, which is responsible for formulating the administration's national security and foreign policy.

Fudge has represented Ohio's 11th Congressional District since 2008. She serves on a number of committees, and previously chaired the Congressional Black Caucus. Prior to running for Congress, Fudge made history as the first woman and first African American to be elected mayor of Warrensville Heights, Ohio.

Rice was thought to be a contender to be Biden's vice president or secretary of state. First Obama's UN ambassador and then later his national security adviser, Rice has a long and close relationship with Biden and has deep foreign policy experience. She also served in Clinton's administration as the special assistant to the president and senior director for African affairs at the White House, the assistant secretary for the Bureau of African Affairs at the State Department and the director of international organizations and peacekeeping at the National Security Council.

Tai is seen as an expert on China trade policy, and if confirmed by the Senate, would be the first woman of color to serve as USTR. She is currently the top Democratic trade counsel for the House Ways and Means Committee. Tai played a key role in negotiating trade policy for Democrats in the United States-Mexico-Canada Agreement, which came under Trump's administration and replaced the North American Free Trade Agreement.