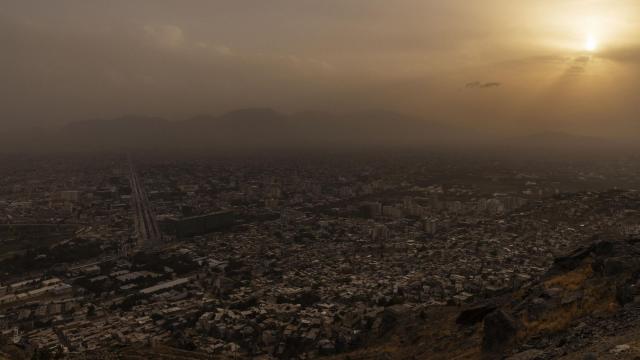 EDITOR'S NOTE: Thomas Friedman is The New York Times' foreign affairs columnist. He has won three Pulitzer Prizes. He is the author of seven books, including “From Beirut to Jerusalem,” which won the National Book Award.

So, I just have one question: Should I point out how President Joe Biden’s withdrawal of U.S. forces from Afghanistan is already reshaping Middle East politics — mostly for the better? Or should I wait a few months and not take seriously yet what one Gulf diplomat drolly said to me of the recent festival of Arab-Arab and Arab-Iranian reconciliations: “Love is in the air.”

What the heck, let’s go for it now.

Because something is in the air that is powerfully resetting the pieces on the Middle East chess board — pieces that had been frozen in place for years. The biggest force shifting them was Biden’s decision to pull out of Afghanistan and tell the region: “You’re home alone. If you’re looking for us, we’ll be in the Straits of Taiwan. Write often. Send oil. Bye.”

Indeed, I’d argue that we are firmly in a transition from a Middle East shaped by great powers to a Middle East shaped by Mother Nature. And this shift will force every leader to focus more on building ecological resilience to gain legitimacy instead of gaining it through resistance to enemies near and far. We are just at the dawn of this paradigm shift from resistance to resilience, as this region starts to become too hot, too populated and too water-starved to sustain any quality of life.

More on that in a minute — first, let’s go back to Biden. He was dead right: America’s presence in Afghanistan and tacit security guarantees around the region were both stabilizing and enabling a lot of bad behavior — boycotts, occupations, reckless adventures and brutal interventions.

Our staunch support for traditional allies, whether they were behaving badly or well, encouraged people to reach beyond their grasp, without fear of consequences. I am talking about the Saudi and United Arab Emirates intervention in Yemen and their boycott of Qatar, Turkey’s various machinations in Libya (or against the Kurds in Syria and Iraq), the now-fallen Afghan government’s idiotic refusal to negotiate with the Taliban and Israel’s expansion of settlements deep into the West Bank.

President Barack Obama’s pullback from the region and President Donald Trump’s refusal to retaliate against Iran — after it sent a wave of drones to attack a key Saudi oil facility in 2019 — were the warning signs that America had grown weary of intervening and refereeing in the Middle East’s sectarian wars. Biden just made it official.

And now, well, as the song says: The best part of breaking up is making up!

In recent months Saudi Arabia has begun patching up its broken ties with Iran and Qatar, and shrinking its involvement in Yemen. The UAE has withdrawn from conflicts in Libya and Yemen, and patched its relations with Iran, Qatar and Syria. Iraq has been mediating between Iran and Saudi Arabia. Both the UAE and the Saudis understand that with their U.S. big brother withdrawing, they cannot afford hostilities with a bigger Iran, and the Iranians understand that with their country still under so many sanctions, they need as many openings to the world as they can get. Bahrain and the UAE have built an open relationship with Israel, and Saudi Arabia has built a covert one. Meanwhile, Egypt and Israel are working together to defuse tensions with Hamas in Gaza.

Alas, though, the U.S. pullback has also become a get-out-of-jail-free card for Syria’s long-shunned, Iranian-backed president, Bashar al-Assad, who has been accused of genocide in quashing a revolt by his own people. For the first time in a decade, King Abdullah of Jordan recently took a phone call from Assad. The Jordanian Palace said they “discussed relations between the two brotherly countries.”

Egypt and Jordan want to try to wean Syria and Iraq, the twin pillars of the Arab state system, away from Shiite Iran. Egypt also wants to export its gas to Lebanon, and cash-strapped Jordan wants to re-establish once-lucrative trade ties with Syria. Egypt, Saudi Arabia and the UAE even took their relations with Turkey out of the deep freeze, hoping to bring it back into the regional fold as a Sunni counterweight to Iran.

Iran, though, is probably thinking that the United States, while it will maintain sanctions, has lost any stomach for military action to curb Tehran’s push to enrich enough uranium to become a threshold nuclear weapons state.

“The U.S. is not pulling out entirely, but it is pulling back, and all of its Sunni Arab partners are now acting to protect themselves — and to stabilize the region — in an era when the U.S. will no longer be dominant there,” argued Martin Indyk, a longtime U.S. envoy in the Middle East, whose new book, “Master of the Game: Henry Kissinger and the Art of Middle East Diplomacy,” is a gripping history of how the United States used peacemaking to supplant the Soviet Union as the dominant foreign power in the region. “But the U.S. will still be needed to deter Iran, should it develop a nuclear capability — and to defuse other conflicts.”

But the power to shape this region comes in many forms.

In keeping with the theme of Indyk’s book, I’d argue that just as we once supplanted the Soviets as the dominant shaper in the region, Mother Nature is now supplanting America as the dominant force.

In Mother Nature’s Middle East, leaders will be judged not by how much they resist one another or great powers, but by how much resilience they build for their people and nations at a time when the world will be phasing out fossil fuels, at a time when all the Arab-Muslim states have booming populations under the age of 30 and at a time of intensifying climate change.

The United Nations recently reported that Afghanistan has been hit with the worst drought in more than 30 years. It is crushing farmers, pushing up food prices and putting 18.8 million Afghans — nearly half of the population — into food insecurity. Over to you, Taliban: You broke it, you own it.

On top of stresses from COVID-19, Iran last summer experienced deadly water riots in its parched southwest — and its climate is predicted to get hotter and drier. Egypt is trying to contend with a rising Mediterranean pushing salty seawater into the irrigation systems of its Nile Delta breadbasket. Egypt and Ethiopia could actually go to war over the water-trapping dam that Ethiopia has built upstream on the Nile.

Israel just signed an agreement to double the freshwater it provides to Jordan, one of the driest countries in the world. And former Prime Minister Benjamin Netanyahu created a firestorm by claiming — crazily and without any facts — that his successor, Naftali Bennett, was being duped because “when he gives King Abdullah water, Abdullah is simultaneously giving oil — to who? To Iran.”

It is the first time I recall Bibi denouncing a rival for giving away not too much land but too much water. A sign of the times.

In fact, there may be a day, very soon, where the United States will need to return to active Israeli-Palestinian diplomacy — not based on land for peace, but sun and fresh water for peace. EcoPeace Middle East, an alliance of Israeli, Palestinian and Jordanian environmentalists, recently put forward just such a strategy called the “Green Blue Deal.”

How would it work? Jordan, with its vast desert areas, has the comparative advantage to produce large amounts of cheap solar electricity to meet its own needs and also to sell to the Israeli and Palestinian grids to “generate the electricity for desalination plants that could provide all three parties abundant fresh water,” Gidon Bromberg, EcoPeace’s Israel director, explained to me.

This kind of ecosystem diplomacy could provide a sustainable way for the United States to re-engage in Mother Nature’s Middle East: All the parties there are ecologically interdependent, but they have unhealthy interdependencies rather than healthy ones. America could become the trusted mediator who forges healthy interdependencies — not as a substitute for an Israeli-Palestinian land-for-peace deal but as the necessary trust-building precursor.