In a shift, Biden campaign signals openness to a super PAC 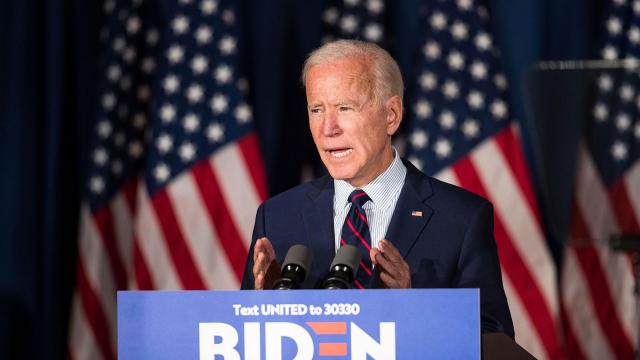 CNN — Joe Biden's presidential campaign on Thursday signaled that it was dropping its objections to the creation of an outside group that would defend against well-financed attacks from President Donald Trump's campaign.

"In this time of crisis in our politics, it is not surprising that those who are dedicated to defeating Donald Trump are organizing in every way permitted by current law to bring an end to his disastrous presidency," Kate Bedingfield, Biden's deputy campaign manager, said in a statement. "Nothing changes unless we defeat Donald Trump."

The statement, which is a stark shift in the position of the Biden campaign, came after CNN reported a coalition of top Democratic strategists and donors loyal to Biden were moving closer to setting up a super PAC to help the former vice president's candidacy.

The idea of building an outside organization had been the subject of discussion for weeks by Biden allies, but the conversations intensified in the wake of a cash crunch for the former vice president's campaign. Biden reported last week having less than $9 million in the bank, significantly less than his leading rivals.

Although he sits atop or near the top of recent polls, Biden's lackluster financial performance has set off rounds of public hand-wringing among Democratic establishment figures about his ability to competitively fund his campaign through the battery of state primaries early next year.

While Biden had previously spoken out against the creation of a super PAC, which would operate entirely separately from his campaign, several longtime allies say it's clear that his presidential bid needs help. No final decision has been made about launching the outside group, but allies have started contacting potential vendors and lining up possible donors to fuel a super PAC, sources familiar with the efforts tell CNN.

"They know they can use all the help they can get," one Biden ally told CNN, speaking on condition of anonymity to discuss the group. "Trump is crushing him with spending."

In the statement on Thursday, Bedingfield said Biden would "push to remove private money from our federal elections" if he won the White House.

But it was also clear Biden has no intention of unilaterally disarming in the wake of the attacks from Trump, with Bedingfield saying: "He and his allies are already spending massive amounts of money on paid television and digital advertising to intervene directly in the Democratic primaries with the goal of preventing Joe Biden, the opponent that Trump fears most, from becoming the Democratic nominee."

The group is comprised of longtime Biden supporters and admirers from the Obama-Biden administration who believe the former vice president has the best chance of defeating Trump. But they worry he is unable to compete in the Democratic primary while simultaneously fighting back against Trump.

Biden's fundraising haul last quarter totaled nearly $15.7 million, but the candidate spent more than he raised, ending the quarter with $8.98 million cash on hand. Biden is outmatched in cash reserves by South Bend Mayor Pete Buttigieg, Sen. Kamala Harris of California, Sen. Elizabeth Warren of Massachusetts, and Sen. Bernie Sanders of Vermont, who has amassed a stockpile of $33.7 million.

Biden's allies are most concerned about combating the attacks coming from Trump. His reelection campaign, joint fundraising committees and the Republican National Committee ended the quarter with a combined $158 million cash on hand. Trump's massive war chest has already been used to target Biden and Democrats with millions of dollars in campaign ads in the wake of the Ukraine controversy, which prompted an impeachment inquiry into the President.

The former vice president recently told reporters he's "confident" his campaign will have the resources to engage in a potentially long primary fight despite the fundraising lag.

"Remember we got started later than anybody at all in this campaign, number one. Number two, we did not start off by dropping $10 million from a Senate campaign, wherever that money was raised from into a race," Biden said in Columbus following the debate last week. "We're doing fine, our fundraising is building. We've raised a lot of money online, and we've raised money offline as well, so we feel confident we're going to be ready."

A Biden adviser says the campaign has raised as much money online during the first two weeks of October as it did during the entire month of September.

Yet there is deep concern inside the Biden campaign and among his supporters.

Campaign filings show that one-quarter of Biden's spending in the July to September period went to payroll, and his campaign spent more than $920,000 on private charter flights in that same timeframe. Additionally, the Biden campaign spent $2 million on digital advertising and media ad buys last quarter, and earlier this month, it announced a $6 million digital and broadcast ad campaign in the early states of Iowa, New Hampshire, Nevada and South Carolina.

"We're comfortable with where we are, and we're comfortable with the investments we've made to date," said Pete Kavanaugh, deputy campaign manager for Biden. "We feel we have more than enough resources to execute as we want to over the next 90 days as we head into Iowa."

"There's not going to be any changes in the plans because this is where we planned to be," added Kavanaugh.

Biden has dedicated a significant portion of his time to traditional high dollar fundraisers, attending more than 70 donor events since he launched his campaign. But he's lagged in small-dollar donations, which have powered the fundraising apparatus of Sanders and Warren, who both have eschewed big-dollar fundraising in their campaigns.

The former vice president has relied on maxed-out contributors for 38% of the money he's raised so far in his presidential bid, according to an analysis of financial disclosure reports, giving the candidate fewer opportunities than many of his rivals to return to loyal donors again for cash as the Democratic primary campaign heats up.

More than $14 million of the $37.6 million Biden collected from individual contributors through the end of September came from donors who gave $2,800 or more to his bid for his party's presidential nomination, according to a tally provided to CNN by the nonpartisan Campaign Finance Institute, which examines money in politics.

By comparison, just 3% and 5% of the money raised by his Sanders and Warren, respectively, came from donors who donated at least $2,800 -- the maximum an individual can donate to a candidate for a primary election.

By contrast, Warren and Sanders have fueled their campaigns largely with online small-dollar contributors, who can be tapped repeatedly for money before hitting the $2,800 limit on primary donations. Nearly 70% of the individual contributions that Sanders has raised so far came from donors giving $200 or less; Warren has a similar profile, at about 64%.

Biden's share of individual contributions raised from small dollar donors during the course of the campaign stands at roughly 35%.

"He can get through the early states without much of a problem, but if he stumbles during that period, his money could easily dry up," Trippi said. "He's working without a net at that point. It's hard to see how small-dollar Internet money would flow for him at that moment, and the maxed-out donors can't do more."

In recent days, the Biden campaign has intensified its pleas for money, pointing out in urgent fundraising requests the significant gap in campaign cash with some of his leading rivals.

A source close to the campaign acknowledged they intend to try dramatically ramping up their digital focus aiming to increase contributions and support, but it's not clear what immediate adjustments might be made to their fundraising operation.

"What you've got here is clearly the frontrunner for the entire time and a finance team that can't capitalize on that," said John Morgan, a Florida attorney who held a fundraiser for Biden earlier this year. "Changes have to be made, and you know, Joe Biden is probably the nicest guy in the world, and it may be hard for him to do that, but too much is at stake not to do it."

Since the start of his presidential bid, Biden's campaign has said he would disavow any spending from a super PAC.

But as he faces an onslaught of attacks from Trump and sluggish fundraising numbers, several allies say it's time for him to accept the help. Bernard Schwartz, a private investor and donor to the former vice president's campaign, said he spoke with Biden within the last two weeks and encouraged him to do just that.

"People out there need some assurance that he has other, additional funds that he expects to come in," Schwartz said.

A super PAC will not come without controversy or criticism -- starting with some of Biden's Democratic rivals.

Sen. Bernie Sanders' campaign manager Faiz Shakir said Biden should reject the support of corporate-backed super PACs and called on other Democratic campaigns to do the same.

"Every Democratic candidate should forcefully reject any help from super PACs," Shakir said, "and they should tell their supporters and surrogates to stop engaging with super PACs that aim to buy elections and undermine our democracy."

This story has been updated with the Biden campaign's response to the creation of a potential super PAC.