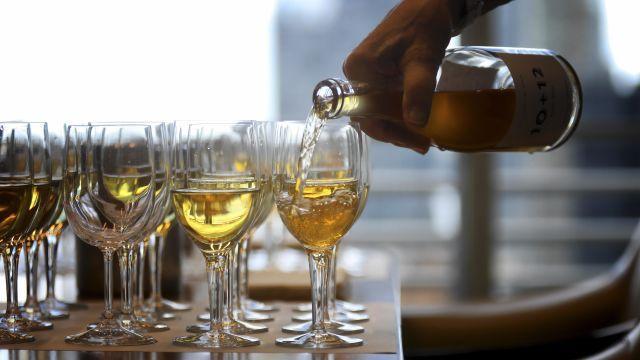 Among all the little-known grape varieties found in the ancient land of Greece, assyrtiko is the one that seems to have broken through. Yet its surfacing has been tentative.

A vanguard of curious and adventurous drinkers recognizes that assyrtiko from the island of Santorini displays many of the characteristics that are associated with great dry white wine. It has been by far the most popular among Greek whites, a category that has grown recently in the United States.

“There has been a significant increase in the sales of Greek wine in the U.S., and especially whites,” said Sofia Perpera, director of Greek Wine Bureau-North America, a trade group. “The hottest category, by far, is assyrtiko.”

Yet most people, including many who consider themselves wine lovers, still regard assyrtiko as something exotic, perhaps even alien.

So what might they make of other Greek whites with names that are vastly more obscure, like moschofilero, roditis and savatiano, to say nothing of athiri, robola and malagousia? Or is that malagouzia?

Spelling itself is a problem. The names of these Greek grapes must be transliterated into English from the Greek alphabet, which sometimes results in multiple renderings.

So moschofilero is sometimes spelled without the “h,” and malagousia with a “z” instead of an “s.” And forget about the red grape agiorgitiko, sometimes written aghiorghitiko or even as its English translation, St. George.

Having witnessed the rise in the quality of assyrtiko in the past decade or so, I was curious about these other Greek whites. Have they made a similar leap in quality? In an effort to answer this question, the wine panel tasted 20 Greek whites from recent vintages. We specifically excluded assyrtikos because we wanted to focus on these other emerging varieties.

For the tasting, Florence Fabricant and I were joined by two guests: Matthew Conway, general manager and beverage director of Marc Forgione in Tribeca, and Joe Robitaille, head sommelier at Bar Boulud and Boulud Sud near Lincoln Center.

One thing was clear: These wines, no matter how obscure they remain, are far more available than they used to be. Years ago, gathering a variety of Greek whites required visiting specialty shops in Greek neighborhoods, like Astoria in Queens. Now, they are carried in fine wine shops all over. Our tasting coordinator, Bernard Kirsch, was easily able to accumulate 20 bottles without the once-marathon legwork.

This was all the more remarkable because, aside from eliminating assyrtiko from the list, we also did not want to include in our tasting international grapes like sauvignon blanc and chardonnay, which at one time seemed to be making inroads into Greece’s vineyards.

Nonetheless, winemakers do not require international grapes to make generic, internationally styled wines. They simply need the modern equipment and techniques of mass-produced white wine — temperature-controlled stainless steel tanks, yeasts that encourage certain aromas and flavors, and so on.

Regardless of which grapes are used, I suspect, the result can be the sort of fruity, generically aromatic white wines that might come from anywhere in the Mediterranean, or the world. Wines like these are sound, refreshing and flawless, unless you consider boring and nondescript to be flaws. They could easily stand in for the pinot grigio at the corner bar.

Quite a few of the wines we tasted fell into that category.

“With so many having that zippy, stainless-steel feel, I thought I was at an albariño tasting,” said Matthew, referring to the Spanish wine from Galicia, which, despite its potential, often descends into formulaic production.

A few followed another recipe, of barrel-fermenting and aging to achieve textured, chardonnay-like qualities. They were pleasant enough, but, again, generic.

We were far more excited by wines that seemed distinctive and original, regardless of the method of production. These wines were fresh and refreshing and would be wonderful on a summer’s evening with Mediterranean or Middle Eastern food. Our favorites were often profoundly herbal and floral.

In a way, I thought, they were a little reminiscent aromatically of a mild version of retsina, the historic Greek white that is flavored with pine sap. I say this with some trepidation as retsina is generally as reviled as it is misunderstood, but I mean it as a compliment. Don’t worry; none of these actually tasted like retsina.

Our favorite was the 2017 Hoof & Lur from Troupis made from moschofilero grapes grown in Mantinia. Moschofilero, like roditis, is a pink-hued white grape, and it can sometimes make wines like this one that might appear to be rosés. Regardless of the tinge, this was a lively, balanced, deliciously herbal wine with citrus flavors.

An unusual wine, our second pick, is made from the ancient muscat of Alexandria grape, which is found all over the Mediterranean. Often, it’s used to make sweet wines, although I’ve had excellent dry examples from Sicily, where it’s called zibibbo. This bottle, the 2017 Terra Ambera from Manolis Garalis on Lemnos, a volcanic island in the Aegean, was dry, perfumed and floral.

Our third wine was the 2016 Theon Dora from Giannis Stilianou in Crete, crisp, fresh and minty. It was a particular study in obscurity, as it was made from three grapes that were unknown to me: vidiano, thrapsathiri and vilana, all indigenous to Crete.

The 2017 Notios from Gai’a in Nemea, an area better known for producing red wines, was our fourth choice. This bottle, made of moschofilero and roditis, leaned toward a more familiar Mediterranean style, but it was very well-done. The next two wines were both made of malagousia, a grape that was on the verge of disappearing in Greece 30 years ago but has been resurrected and is now found all over the country. The first, rendered malagouzia, is the 2017 from Antonopoulos in the Achaia region in the northern Peloponnese: tangy, fresh and slightly more austere than the zesty, harmonious 2016 malagousia from Zafeirakis in Tyrnavos in the Thessaly region.

Also worth seeking out are two robolas from the island of Cephalonia in the Ionian Sea: the bright, succulent 2017 from Orealios Gaea, which we liked a little more, and the rich, textured 2015 Vino di Sasso from Sclavos. We also recommend the savory, herbal 2016 roditis (spelled “rhoditis”) from Kouros in Patras, and the earthy, floral 2015 moschofilero from Nasiakos in Mantinia.

It was plain from our tasting that these grapes have the potential to make wonderfully distinctive wines. They are already excellent values. None of the wines in our top 10 cost more than $24, and six of them were $20 and under.

It was also obvious that almost half the wines in our tasting — the ones we rejected — suffered from formulaic winemaking. None were undrinkable, but in wine shops already crammed with generic whites, it’s doubtful that the unfamiliar names have much shot of breaking through.

The niche success of assyrtiko offers a formula of a different kind: Figure out what is not already saturating the market and go for it.

Crisp and fresh, with cool mint and citrus flavors. (Eklektikon)

Balanced and zesty, with flavors of citrus, herbs and peaches. (DNS Wines)

Bright and succulent, with flavors of herbs and tropical fruits. (Verity Wine Partners)

A Noodle Bowl Ready for a Trip to Greece

In general, one selects the dinner menu before choosing the wine. For the pairings column, the procedure is reversed: The wine comes first. But exceptions can be made. The moment I tasted the noodles with Chinese broccoli at Majordomo, David Chang’s new restaurant in Los Angeles, I knew I had to have the recipe, as it would be well-suited to beer or white wine. The Greek whites we tasted were the perfect foil for this spicy noodle dish. At the restaurant they make their own thick noodles using a combination of wheat flour and cassava starch, but executive chef Jude Parra-Sickels suggested bucatini as an easy substitute. The pasta is mingled with bright broccoli, lightly coated with a rich sauce that conveys a bit of heat. In preparing and serving the dish, do not short change the mixing of the ingredients because the broccoli tends to hide under the pasta. You have to coax it out, especially as you serve it. — FLORENCE FABRICANT

3 cups Chinese broccoli, broccolini or broccoli (about 12 ounces), sliced in 1 1/2-inch pieces on the bias

1. Bring a pot of well-salted water to a boil for the pasta. Toss the broccoli into the pot, return to boil and cook 2 more minutes. Use a slotted spoon or a sieve to fish the broccoli out of the boiling water and into a colander. Cover the drained broccoli with ice cubes.

2. Heat the fat in a large skillet on medium-low, add garlic and cook until the garlic is golden. Remove from heat and stir in the fish sauce.

3. Add the bucatini to the boiling water and cook until al dente, about 8 minutes. When the pasta is almost done remove 1 cup of pasta water from the pot and add it to the skillet. Reheat the contents of the skillet on medium-high, cooking to reduce the liquid by half. As the liquid cooks, drain pasta and set aside. Remove the ice cubes from the broccoli and transfer the broccoli to the skillet. Add the chile oil. Reduce heat to low and continue simmering the contents of the skillet.

4. Add the cooked pasta to the skillet. Using tongs, toss the pasta with the other ingredients for several minutes until well combined. Season the pasta to taste with salt and pepper. Add sesame oil and toss again. Transfer everything to a wide bowl and serve.