Beware of these inaccurate reports about the George Floyd protests

Demonstrations erupted in Minneapolis over the death of George Floyd, who died May 25 after a white police officer pinned his knee against the black man’s neck.

On May 28, protesters lit the police precinct on fire, and President Donald Trump tweeted "when the looting starts, the shooting starts." A CNN reporter was arrested on live television. As police pushed back demonstrators with tear gas and rubber bullets, the Minneapolis Fire Department responded to roughly 30 fires around the city.

PolitiFact fact-checked several of the most popular claims about the Minneapolis protests below. The posts were flagged as part of Facebook’s efforts to combat false news and misinformation on its News Feed.

As protests in Minneapolis turned violent, some Facebook users said Floyd’s death was staged by police.

A May 28 post claims the death of Floyd was a "staged event." Floyd, a 46-year-old black man, died in police custody May 25 after being handcuffed and pinned down by a white officer.

"I think there is at the very least the ‘possibility,’ that this was a filmed public execution of a black man by a white cop, with the purpose of creating racial tensions and driving a wedge in the growing group of anti deep state sentiment from comon (sic) people, that have already been psychologically traumatized by Covid 19 fears," reads one post.

There is no evidence to back it up. We reached out to the original poster for a comment, but we haven’t heard back.

After a video of Floyd’s death started to circulate on social media, protesters took to the streets in Minneapolis. Four police officers involved in the incident were fired. Derek Chauvin, the officer who knelt on Floyd’s neck, was taken into custody and charged with third-degree murder and manslaughter on May 29.

The FBI and Justice Department are investigating Floyd’s death as a possible violation of federal civil rights laws. Hennepin County and federal prosecutors are also looking into the possibility of bringing charges against the officers involved in the incident. We reached out to the Minneapolis Police Department for a comment, but we haven’t heard back.

None of the investigations have disputed that the video shows Floyd’s death — and that Chauvin kneeled on Floyd’s neck, killing him.

The nearly 1,000-word Facebook post weaves together a series of speculations and unrelated facts, the motives of the officers and the timing of the incident to spin an unproven conspiracy theory. None of it confirms that the incident was staged.

You can read the full fact check here.

No evidence Target looted for not serving protesters

A Facebook user claimed that a Target store in Minneapolis was looted for supporting police by "refusing to sell milk to tear-gassed" protesters. People who have been hit by teargas sometimes use milk to ease the stinging effect.

"I was just informed that the reason they looted that Target in Minneapolis is because it was supporting the Minneapolis PD & refusing to sell milk to tear-gassed protesters," began the post, which ended with "BLM," the hashtag for "black lives matter." 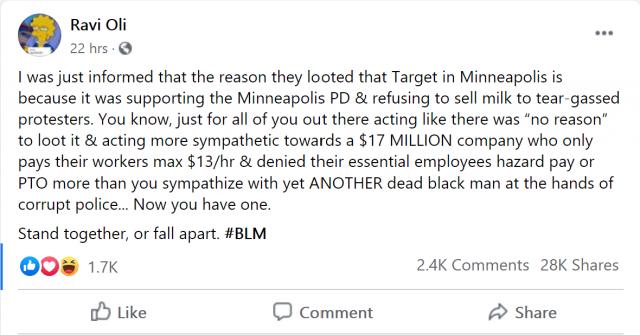 The post was shared on Facebook more than 28,000 times. But PolitiFact has not found evidence to support it.

Looting started at the Target store on Lake Street May 27 before spreading to other areas in the city, the Star Tribune reported, with looters seen leaving with items such as large TVs, clothing and groceries. Police used tear gas after protesters threw items at them, CNN reported.

As we prepared this fact-check on May 29, details of the looting at the Target, across from a police station, remained sketchy. However, we found no evidence that the looting was prompted by employees at the store refusing to serve protesters.

Target’s corporate office did not respond to our requests for information. It had issued a statement on May 28 saying, "We are heartbroken by the death of George Floyd and the pain it is causing our community," and said that it had closed six stores in Minneapolis and St. Paul.

It was later reported that Target had closed 24 stores in the Twin Cities area, but reopened 18 of them on May 29. We found no reports in our Google and Nexis searches about looting being prompted by the store refusing to serve protesters.

No, George Soros and his foundations did not pay people to protest

Billionaire philanthropist George Soros has been accused for years of directly funding and even orchestrating protests.

In a series of tweets, Candace Owens, a conservative commentator, claimed that George Soros and his Open Society Foundations had hired the protesters that started fires and raided stores during protests in Minneapolis over the death of George Floyd.

She at first tweeted that it was her "guess" that "Democrat George Soros has these thugs on payroll. He is funding the chaos via his Open Society Foundation." She went on to tweet that the foundation had to "throw money at black Americans to riot" and that Soros and the foundation "got what you wanted in Minnesota." We reached out to Owens for additional comment and did not hear back.

Open Society Foundations is a liberal grant-making network that is "the world’s largest private funder of independent groups working for justice, democratic governance, and human rights." Their network funds programs in more than 120 countries, including work in the United States that "focuses on immigration and criminal justice reform, improving democratic participation, and supporting free and independent media."

The Open Society Foundations’ official Twitter account responded to her tweet that they "oppose all violence and do not pay people to protest" and that these were "baseless allegations."

An Open Society Foundations representative told PolitiFact that the foundation "supports the First Amendment right of all Americans to make their voices heard and petition their government for redress of grievances." However, when it comes to rioting, "George Soros and the foundations oppose violence in any and all forms," they said.

The foundation does give grants every one or two years to U.S. organizations that work to "advance racial justice and to make police forces more accountable to the communities they serve." They then listed a few, including the Community Resource Hub for Safety and Accountability, a website that keeps a database of resources and grassroot organizations related to policing in the United States.

PolitiFact could find no evidence that Soros or the Open Society Foundations had contributed to any organization that financed street protests in Minneapolis.

The claim that George Soros funded the Ferguson protests and Black Lives Matter was checked by Snopes in 2015, and it received a mixed rating. Snopes said that Open Society Foundations has donated $33 million to organizations that have worked with Black Lives Matter or worked to raise awareness during the Ferguson-related protests. However, they had never given money to groups for the express purpose of organizing protests with the movement.

The representative from Open Society Foundations said that their grants are made to organizations to help them "support communities and advance policy change."

We didn’t find any evidence that the foundation has given money directly to the Black Lives Matter movement. The most recent connection they have with the organization is their 2018 grant of $279,860 to Release Leads, a UK organization that mostly focuses on international drug use education and policy reform, but also organizes public speaking events that feature the Black Lives Matter movement in the UK.

To read about other conspiracy theories, check out this PolitiFact story.