Betting on a Better Way to Make Concrete 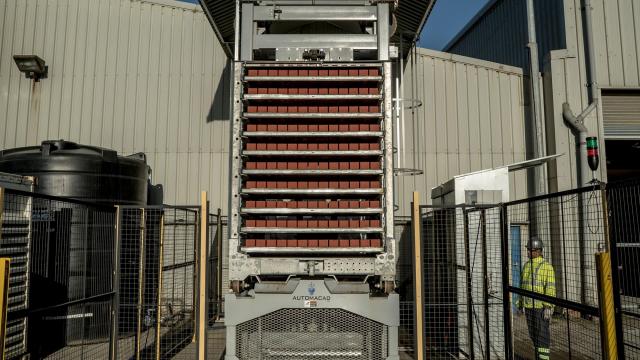 LEIGHTON BUZZARD, England — Just after sunrise, a concrete plant in a muddy industrial zone north of London stirs to life. Workers in orange suits and hard hats watch through a protective window as a machine presses what looks like red sand into a tray of brick-shaped blocks.

Further along the line, other workers carefully measure these ruddy-colored blocks, pitch rejects into bins, and then adjust the machinery to correct errors.

Joining the dawn patrol on this fall morning is a team from a company called Solidia Technologies. Solidia is based in Piscataway, New Jersey, and has financial backing from a well-known Silicon Valley venture capital firm, Kleiner Perkins Caufield & Byers, as well as oil companies like BP and Total of France.

These crew members, dressed in yellow protective suits to distinguish them from their local partners in orange uniforms, are visiting England to test a new technology that the company hopes will dramatically reshape the manufacturing of concrete. Solidia says it can make this ubiquitous building material cheaper and at the same time reduce carbon dioxide emissions by essentially turning them into stone.

Solidia’s big bet is that by tweaking the chemistry of cement, the key ingredient in these blocks and other concrete products, it can profit from helping to clean up an industry that is not only one of the largest on the planet but also one of the dirtiest. Cement plants are major league emitters of carbon dioxide, which is blamed for climate change.

The technology seems to work but persuading the concrete industry to sign on is proving a painstaking and costly process. “It’s a labor of love; it is a market that is resistant to change,” said Jan van Dokkum, a Kleiner Perkins operating partner and Solidia’s chairman, who has spent a decade nurturing the company.

Solidia’s European collaborators, concrete giant LafargeHolcim, are intrigued enough to allocate the Americans a couple of hours plant time for a stretch of mornings — one of a series of trial runs in Britain and in North America. So far, they like what they see. “From my perspective the chemistry works, the mix works, the process works,” said Warren Hilton, the plant manager.

Hilton said that he was especially attracted by the potential for saving money by speeding up the manufacture of the thousands of these paving blocks his plant churns out yearly. The concrete stones go into walkways, patios and the surroundings of soccer stadiums. “if we can get the technology to work here,” Hilton said. “There will be a great benefit to any local concrete plant” that uses it. To date, much of the focus in combating global warming has been on the electric power industry, where huge investments have been made in clean energy sources like wind and solar. Experts, though, say other major carbon dioxide sources like manufacturing industries, responsible for about a quarter of emissions, will also need to be tackled if the world is to rein in climate change.

Cement ranks near the top of this list. Cement is the glue that binds together sand and gravel to form concrete, a material used to build everything from roads, to homes, to water and sewage systems. It forms about 15 percent of the content of these blocks.

Because of the high heat and large amounts of energy needed as well as the chemical processes involved, making conventional or Portland cement — a process which requires high temperature kilns — produces as much as 7 percent of total global CO2 emissions. On a ton for ton basis, cement plants spew more carbon dioxide than any other manufacturing process, according to the International Energy Agency. Taking on cement making is “quite key from a decarbonization perspective,” said Araceli Fernandez Pales, a senior energy technology analyst at the agency, which is based in Paris.

Solidia claims it can reduce as much as 70 percent of that pollution by using different chemical formulas and smarter procedures to make cement. Ordinarily, for instance, concrete is cured or hardened in a reaction using water and steam. Solidia uses carbon dioxide instead.

At the end of the production line at the concrete plant, a fork lift operator stacks the trays of paving blocks like baked bread in what look like shipping containers. Carbon dioxide, collected from the flues of industrial plants, is pumped in from a nearby tank in amounts regulated by a system using sensors and computer software. Through a chemical reaction, the CO2 is incorporated in synthetic limestone instead of being released into the atmosphere. The Solidia blocks are ready for use in 24 hours — a big potential advantage over ordinary pavers, which require a couple of weeks to harden.

Experts say that Solidia’s technology, which was developed at Rutgers University, in New Brunswick, New Jersey, is promising. “There is absolutely no reason it should not work,” said Tom Hills, a specialist on new cements at Imperial College in London.

If Solidia’s concrete-making technology succeeds in gaining traction around the world, it could be a way of binding up large quantities of carbon dioxide in roads and other structures. That potential is attractive to oil companies looking for ways to reduce the greenhouse gases their activities produce. BP, for instance, has invested $10 million in Solidia. The company says it wants to use the technologies “near our operating facilities where we could take CO2 generated and turn it into something material and productive,” according to David Nicholas, a company spokesman. Winning over the cement and concrete industry will be tough for Solidia and other companies with alternatives to traditional products, Hills said. Solidia executives complain that the building industry is resistant to change, but the hesitation to adopt newer technologies is understandable. “If you want to build something that lasts 50 or 60 years,” said Hills, who also works as a research engineer at a technology company called Calix. “Would they be willing to take the risk to build a building and to have it fall down?”

The trial run at Leighton Buzzard is part of a long and costly effort by Solidia to win converts, whom the company hopes will eventually license the technology. The company has spent around $100 million on R&D and trials like this one and is close to gaining the first glimmers of commercial acceptance.

In the battle to gain acceptance, Solidia is starting with simple, low risk products. The blocks the company is making at the plant are “not really a very sexy product,” said Tom Schuler, Solidia’s chief executive, but were chosen as the “fastest way to have an impact.” U.S. stone and tile company EP Henry, for instance, is using Solidia’s technology to make and sell pavers for walkways, patios and driveways.

In other words, if a block breaks on the patio, the house will not fall down. Applications like reinforced concrete or mix poured from trucks are more complicated with more complex regulation and, thus, for down the road. Solidia has also been careful to tailor its technology so that existing plants do not have to make expensive changes to adopt its manufacturing techniques. “If you make potential customers “do too many different things, you are going to get resistance,” said Bo Boylan, Solidia’s chief commercial officer.

Van Dokkum of Kleiner Perkins, who is a veteran of the renewable energy business, says, optimistically, that Solidia may now be at the stage where solar power was a decade or more ago. A relatively few early adopters and government subsidies helped solar gain acceptance until the prices of panels came down, opening the way to today’s huge market. “Once we get this transition going,” he said. “Then suddenly this thing will boomerang through the industry.”