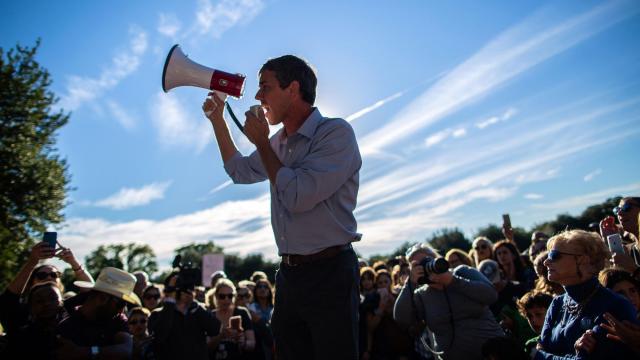 HOUSTON — Rep. Beto O’Rourke, the Texas Democrat whose unsuccessful underdog Senate bid this year turned him into a political celebrity and fundraising powerhouse, told an El Paso audience Monday that he was not ruling out running for president in 2020.

O’Rourke had previously said, on repeated occasions, that he would not seek the presidency in the next election. But O’Rourke has demonstrated strong appeal with a cross-section of Democrats as well as with people who had never voted before or infrequently cast ballots, and he now possesses a list of hundreds of thousands of small donors that is the envy of most politicians mulling a White House bid.

A three-term liberal congressman from El Paso, O’Rourke, 46, lost to Sen. Ted Cruz in a hard-fought campaign to become the first Democrat to win a Senate race in Texas since Lloyd Bentsen was re-elected in 1988. But Cruz won by just 2.6 percentage points in a solid-red state — President Donald Trump carried Texas by 9 points in 2016 — and Democrats have spent weeks speculating about O’Rourke’s future in politics.

At a town hall event Monday and in remarks to reporters afterward, O’Rourke suggested he was now open to a presidential run, a significant shift from his remarks on the matter during his Senate race.

When asked by a member of the audience if he was running in 2020, O’Rourke said he was focused on spending time with his wife, Amy, and his children, as well as finishing his term in Congress, which ends in January.

“And then, Amy and I will think about what we can do next to contribute to the best of our ability to this community,” O’Rourke said, according to a report in The Texas Tribune.

After the event, O’Rourke told reporters that before the election, winning the Senate race was his focus.

“We’re thinking through a number of things and Amy and I made a decision not to rule anything out,” O’Rourke said. “The best advice I received from people who’ve run for and won and run for and lost elections like this, is don’t make any decisions about anything until you’ve had some time to hang with your family and just be human. And so I am following that advice.”

In an interview in August with The New York Times, O’Rourke dismissed any speculation that he would seek the White House even if he lost the race.

If O’Rourke enters the 2020 Democratic presidential nomination contest, he would very likely become a formidable rival for other possible candidates who are popular with small donors and progressive activists, like Sen. Elizabeth Warren of Massachusetts and Sen. Bernie Sanders of Vermont. O’Rourke stood out in the 2018 midterm campaign as an unusually charismatic figure and speaker — a former punk rock bassist who became a businessman and City Council member before entering Congress.

Still, O’Rourke has never been subjected to the intense scrutiny and rigors of a national campaign, and this year he was running against a relatively unpopular figure, Cruz.

Any run by O’Rourke could also complicate the political calculus for one other high-profile Texas Democrat, Julian Castro, the former mayor of San Antonio and the former housing secretary in the Obama administration, who has said he is considering running for president in 2020.

Trump, who campaigned in Houston before the election in the hope of boosting Republican turnout for Cruz, has derided O’Rourke on Twitter, calling him in one post “a total lightweight.”