From New York's Italian-style, to Chicago's deep dish, to California's thin crust and creative toppings, everywhere that's anywhere has put its own spin on the most deliciously versatile food on the planet: pizza.

Last year, we told you our Five Faves for pizza in the Triangle, but our list was a few slices short of a full pie. There are just too many pizza spots to love, and we thought we needed a second list, incorporating some reader suggestions, to round it out.

Let us know what you think. We're happy to take recommendations, especially if that means we've got more pizza to try!

Pizza may have been born in Italy, but grandma's recipes took on a life of their own in New York. Those flat, thin, triangular slices topped with the finest Italian meats and cheeses will make you fuhgeddabout your cares.

Two places in the Triangle have got New York-style pizza down flat. One is Frank's Pizza on New Bern Avenue in Raleigh, where the pizza slices are bound together by an elastic blanket of gooey mozzarella, the antipasto salad is topped with tart and spicy homemade marinated veggies and the old-school ambiance is something straight out of the Bronx. It's definitely a hole in the wall, but the oven is warm and the aroma of piping hot pie hits you as soon as you open the door.

The staff is friendly and helpful – they even recommended I return for a Sicilian pizza, which was described as two pizzas, one face down on top of the other, baked until the crust all around is golden brown and the inside is bursting with sauce, cheese and toppings. Obviously I'll be back for that. If it has your tastebuds watering as well, call ahead, the Sicilian takes about an hour to prepare.

Next is Gino's Pizza on Glenwood Avenue. This is a great spot for lunch, where two huge one-topping slices and a drink rings in for less than $5. The sauce is fresh and sweet like tomatoes straight from the vine, and the crust gets brown to a crackling finish. 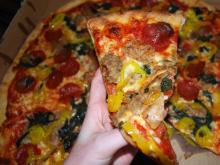 If you're more interested in the Midwest perspective on pizza, head to Rosati's in Morrisville for an authentic Chicago-style pie. Unlike its New York counterpart, Chicago-style is a more like pie than pizza. The crust is thick and bread-like, it's baked in a deep dish and the toppings are layered upside down – meat first, cheese second, sauce on top. Rosati's, which originated in Illinois 50 years ago and still has several locations there, somehow made its way south with its variety of pizza style offerings.

You can stick to the Chicago tradition with a deep-dish pie, keep it simple with double dough and thin crust or go straight to cheese heaven with the stuffed pizza. Better yet, go ahead and try them all, but give yourself some recovery time. There is perhaps nothing more filling than a single slice of Chicago pie.

When I asked around about the best pizza spots in the Triangle, I kept getting the same answer: Bella Mia, which serves up gourmet pizzas in Cary. The pizza is coal-fired and crispy, and loaded with fresh veggies, generous drizzles of olive oil and delicious cheeses that go beyond the traditional mozzarella.

In Durham, a city that recently scored pizza royalty with the opening of a Lilly's location at Brightleaf Square (Lilly's is a staple of Raleigh's historic Five Points neighborhood; it made our Five Faves list last time around, but definitely deserves a second mention) the pizza scene is blossoming with the new food truck Pie Pushers and Pizzeria Toro coming soon to Chapel Hill Street downtown.

For my money, though, there's nothing better than  Pop's Backdoor (yes, it's in the same family as the ever-popular Pop's Restaurant downtown). The specialty pizzas and calzones are quirky and unique; there's always a new flavor combination to try. My favorites are the Bar-B-Q Chicken and the Margherita. For something really different, try Pop's Famous Salty Egg pizza with prosciutto, kalamata olives and roasted garlic or a pie topped with granny smith apples and brie.

Another great thing about Pop's Backdoor -- they deliver!

So, what did we miss? What needs to make the list next time around?