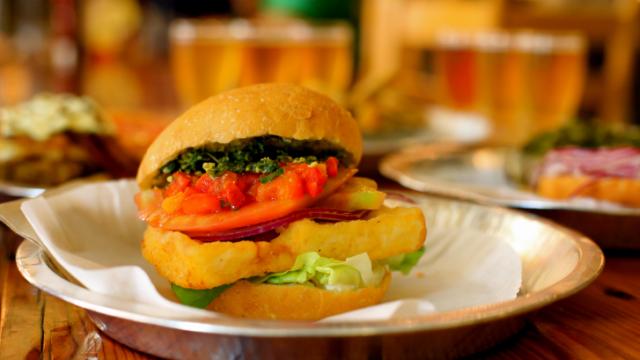 Raleigh, N.C. — Summer is officially here! With the Fourth of July offering a sweet three day weekend, there’s nothing better than lighting up the barbecue, grilling food and having a good North Carolina beer.

You don’t want to toss back just ANY beer, you want to have something that’s going to pair well with all that food you're cooking. Beer goes with everything but you want to have the right beer with the right food to get the most out of the experience. When each one complements the other, it’s an amazing taste explosion.

Below are our Five Fave selections from the Triangle area to enjoy with your grilling adventures.

1. Wilma’s Wandering Eye-PA - Double Barley Brewing. This is a double IPA that drinks more like a tripel. It’s not overly hoppy which makes it a fantastic pair up with barbecued meats that are drenched in tomato and brown sugar-based BBQ sauces. The sweet rich flavor of the beer can handle both Carolina and Memphis style BBQ, complementing both the tartness of vinegar as well as the sweetness of tomato.

2. Carver Sweet Potato Lager - Fullsteam Brewery. A nice, slightly sweet lager that will be a hit with grilled pork, chicken and seafood. Don’t let the “sweet potato” scare you away! This beer has rich flavor that will hold its own yet still accentuate the flavors of the meat.

3. Brüenette - Brueprint Brewing Company. A brown ale, with its dark, maltier flavor, goes perfect with ribs and burgers. The slight chocolate flavor is really going to bring out the earthy, rich flavors of the beef. Add a hunk of cheddar on the burger and the combination with this beer will melt in your mouth!

4. Trub Smoked Porter - Triangle Brewing. Also known as Rauchbier, the smokiness isn’t overwhelming and will really bring out the savory flavors of grilled sausages. Adding condiments to it? The maltiness of the beer is a nice offset to the acidity of sauerkraut and/or mustard.

5. Bennett ESB (Extra Special Bitter) Ale - Bull City Burger and Brewery. In beer styles, “bitter” does not mean bitter flavor but more a designation originating in England for the gravity/ABV of beer. An ESB has the highest level in the scale and the maltiness offers nice caramel notes. This one has low carbonation, a toasty, biscuity quality and balanced hop bitterness which really makes it nice and easy to drink. This will pair up across the spectrum of your grill from pork to fish to chicken.

We really can’t overlook one of the beers in the Triangle that screams barbecue and is a staple for your grill - Fullsteam’s Hogwash. This beer was made for eating Carolina BBQ and would also make a fantastic marinade.

Remember, taste is very subjective. As we always say with beer styles, you don’t know until you try and maybe you’ll find an unexpected taste enlightenment. Do you know of a local beer that you think pairs incredibly with your grill creations? Let’s hear it!

Dave Tollefsen and Glenn Cutler are regular guys living in central North Carolina with their families who share a love for craft beer and homebrewing. They work together as the NCBeerGuys. They can be found online at ncbeerguys.com promoting North Carolina craft beer, providing information about the folks who produce local beer and writing about beer adventures, activities and events across North Carolina.