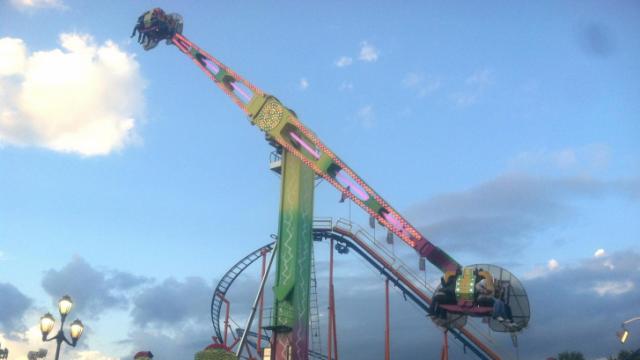 With the North Carolina State Fair entering its last weekend I decided to make my way out to the fairgrounds for an afternoon of twists, turns, upside down twirls and stomach-curling drops as I took on the task of compiling the five best fair rides. Warning, this list is not for those with weak stomachs, motion sickness or who have taken part in everything fried the fair has to offer.

The Zipper: This classic fair ride has been around since I started coming to the fair more than 10 years ago. This ride is a perfect example of “if it ain't broke, don’t fix it.” I was equally scared riding this time as I have been every year. You board the Zipper by getting strapped in a cage along with one other person. There are about 12 cages so people are loaded onto the ride two at a time. This adds to the anxiety because if you are the first one to get on, you are slowly hoisted around the ride waiting for the others to get on. Once the ride begins you are taken straight up vertically and then go around and around. If it was not already enough that you are traveling round and round, the cage flips! Quick tip: Do less. The more you try to flip the less you actually will.

The Fireball: I could not think of a better name for this ride. The ride is set up with a long pole with seats arranged in a circle and everyone is facing each other. There are six groups of four seats in this claw like arrangement. As the ride begins the music starts playing and a strobe lights start flashing. The pole begins to swing back and forth. As the pole swings, the Fireball starts to spin in a circle, the lights alternating between strobe and classic fair lights. As you are spinning, you are being furiously swung back and forth, almost to the point of being completely upside down. The ride actually gives the allusion a fireball is soaring through the air because of the light color scheme. This is great for people who enjoy a thrill but do not like to go upside down. Also, this is a great ride when the park is busy because it holds about 24 people so the line moves as fast as a fair line can. 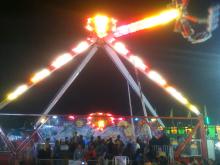 The Claw: The seating arrangement at fist glace is the same as The Fireball but this ride has an added "twist." The difference is the claw is attached to an arm, not a pole. The Claw does not swing back and forth but instead the arm causes the claw to flip on its side, upside down, and all around. This is another ride that is great when it is crowded because of all the seating, but you definitely want to ride this one before you enjoy the wonderful food the fair has to offer. The Claw is not for the squeamish! 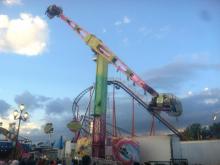 The Vortex: If you would like a chance to see the entire park, but in a daring and exhilarating way, this ride is for you! The ride is made up of a long pole with one bucket at each end. Each bucket has two rows of two seats back to back, so eight people ride at a time (four on either end.) The pole spins you around and around while the buckets are free to spin as well. You ride facing forward half the ride which looks like you are being catapulted into the ground then you will be going backwards for half of the ride. If you are brave enough to keep your eyes open you will get a nice inverted view of the fairgrounds. When you get on or off this ride you have to wait for the other arm to load and unload. When this happens you are sitting at the highest point of the fair and you can see everything. (If you are sitting at the top waiting for the ride to begin this can be a little unsettling.) Try to ride this ride early because when it gets crowded there is a very long wait. I waited an hour to ride in a very short line. Another tip, hold on to any loose items.While I was in line I saw a few phones explode when they hit the ground and some UFOs flying into neighboring areas. 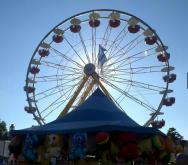 The Ferris Wheel: Any trip to the fair would not be complete without a ride on the Ferris Wheel. This is also a relaxing way to get an immaculate view of the fairgrounds and the Raleigh skyline. Grab someone you don't mind spending a few secluded minutes with and some cotton candy and relax as you take in all the sights, sounds and most importantly smells of the fair.

What are your favorite rides at the NC State Fair?