Moving to North Carolina was difficult because I had become accustomed to eating that food. I was homesick when we tried some seafood places around here because it just didn't taste like home. Then, I discovered some great Cajun food in the Triangle!

Here are our Five Faves places to grab some of native Louisiana food:

Battistellas (Raleigh) - This place had me at their artwork of New Orleans on the wall. The food is authentic, as it should be since its owner and chef Brian Battistella is a Louisiana native. I recommend the crawfish etouffee or fried catfish, then finish with their amazing bread pudding served warm with a white chocolate sauce. 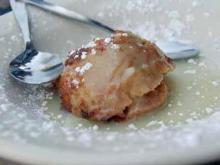 - This was the first Cajun place I went to in the Triangle. Their jambalaya blew me away! Definitely reminiscent of home, especially with its use of Andouille sausage. Don't forget to try their gumbo while you're there.

Shuckers (Wake Forest) - Oyster bars are hugely popular in the New Orleans area. You can even get fresh shucked oysters at the airport. So, I was pleasantly surprised to find an oyster bar in Wake Forest. Shuckers has a great menu featuring oysters on the half-shell (steamed or raw), Middleneck clams, mussels and shrimp. Their crab cakes are probably my favorite, but another great item on the menu is the Big SOB - a steamboat filled with oysters, shrimp, clams, mussels, crab legs, corn and Andouille sausage.

- Two words: Banana's Foster. This traditional New Orleans dessert features bananas sauteed in a bourbon rum sauce over their homemade bread pudding and topped with vanilla ice cream. Just like back home. Other menu standouts: the Alligator Bites (yes, real alligator), seafood gumbo and crawfish etouffee. Their jambalaya is good, but even I found it a bit too spicy at times.