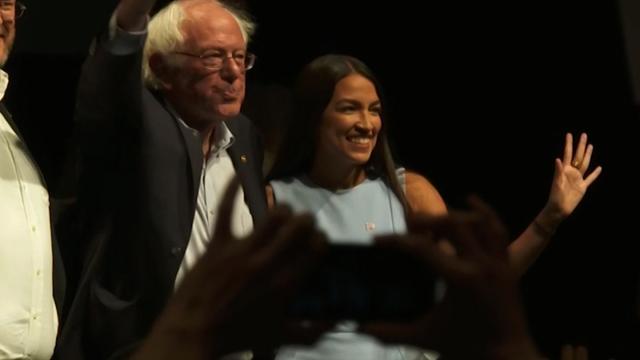 CNN — Sen. Bernie Sanders returned to the campaign trail Saturday in New York City for a rally with Rep. Alexandria Ocasio-Cortez, who delivered to him one of the most sought-after endorsements in progressive politics.

"I'm proud to say that the only reason that I had any hope in launching a longshot campaign for Congress is because Bernie Sanders proved that you can run a grassroots campaign and win in an America where we almost thought it wasn't possible," Ocasio-Cortez said.

Ocasio-Cortez told Sanders she would back him in a phone call while he was still in a Nevada hospital after a heart attack less than three weeks ago, aides to both confirmed, and news of her decision has been greeted as a welcome -- and validating -- shot of adrenaline inside his campaign.

The "Bernie's Back" rally in Queensbridge Park, just outside the border of the congressional district Ocasio-Cortez was elected to represent last November, comes days after word that she and "Squad" ally Democratic Rep. Ilhan Omar of Minnesota would endorse Sanders. Democratic Rep. Rashida Tlaib of Michigan is expected to join them soon, potentially at an event later this month in her home district.

In an interview with local news outlet NY1 ahead of the Queens rally, Sanders described Ocasio-Cortez as "one of the great political phenomenons in recent American history."

"This is a young woman who a year ago nobody knew who she was. And in one year, in the United States Congress she has been a leader on major issue after major issue, including the Green New Deal, including issues of housing, including issues of addressing the crisis of student debt," the Vermont independent said. "So she is really an inspiration to people not only in New York but all over this country and I'm very, very proud that she is now a part of our campaign."

Sanders made his in-person return to the primary stage at Tuesday's CNN/The New York Times debate in Ohio. While Elizabeth Warren of Massachusetts, his fellow Senate progressive and leader in a number of recent polls, seemed to be at the center of every skirmish and the focal point of increasingly blunt attacks from the contest's centrist candidates, Sanders delivered one of his sharpest debate performances -- a showing that, at least for now, has seemed to quiet concerns over his health.

Sanders and Ocasio-Cortez have campaigned together before, during the summer of 2018, for progressive Democratic primary candidates. Saturday's rally, though, will be something entirely different -- as Ocasio-Cortez, who had publicly weighed endorsing either Sanders or Warren, commits herself to the 78-year-old's second crusade for the Democratic nomination.

Her endorsement will underscore an argument the campaign has been making for months, which contends that Sanders is uniquely positioned to forge, as his campaign manager, Faiz Shakir, described it earlier this week, "the multiracial working class coalition we need to win."

Ari Rabin-Havt, Sanders' chief of staff, told CNN after the debate -- just a few hours after The Washington Post first reported on the endorsement -- that Ocasio-Cortez's decision would give new fuel to the "movement" that Sanders hopes will sweep him into the White House.

"This isn't about Bernie Sanders. This is about us," Rabin-Havt said. "And this is what these endorsements are about. These are people who want a movement for change in this country. A movement for 'Medicare for All,' a movement for a Green New Deal, a movement on these issues. And you know, when Bernie Sanders says, 'Not me, us,' I think that message resonates with members of Congress who believe strongly in a movement."

The endorsement, Justice Democrats Executive Director Alexandra Rojas said on the eve of the New York rally, is "significant in the sense that it shows that the Bernie campaign is important to progressives and Democratic voters."

"I know that Justice Democrats and myself (in this role) wouldn't even exist if it hadn't been for Bernie's 2016 presidential run," Rojas said. "He has a young, racially diverse, totally working-class base of support, which is the same people that Alexandria Ocasio-Cortez represents. She looks so much more like the grassroots base of the Democratic Party than Chuck Schumer, than Nancy Pelosi. And I think that's why the endorsement was so important for Bernie."

Ocasio-Cortez had indicated in previous months that she could hold off in choosing a presidential candidate to support until later in the year, or even into the primaries, which begin in February with the Iowa caucuses. But rumors that she might get involved sooner heated up after a late September visit to Burlington, Vermont, where she, Sanders and a couple of close aides met for dinner, according to a source familiar with discussions, and then again the next day for brunch.

Shakir said Tuesday night that those conversations, while they did not lead to any kind of firm commitment, were "a very key step in the process."

"And then we, obviously, our teams worked together on a lot of details," Shakir said, referencing a rollout that had begun earlier that day when the campaign began teasing the appearance of a "special guest" at the New York rally.