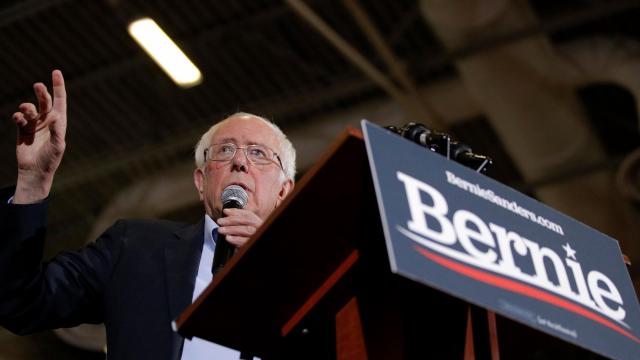 CNN — Sen. Bernie Sanders of Vermont raised more than $34.5 million for his White House bid during the final three months of 2019 -- a sign of his considerable financial strength a little more than a month before Democrats begin selecting their 2020 presidential nominee.

Sanders was the second candidate vying for the Democratic nomination to announce his fundraising numbers in the fourth quarter, a day after former South Bend, Indiana, mayor Pete Buttigieg announced raising $24.7 million. The other Democrats who have emerged in the top tier, former Vice President Joe Biden and Massachusetts Sen. Elizabeth Warren, have not yet announced their totals for the last months of 2019.

President Donald Trump also announced on Thursday that he raised $46 million in the fourth quarter, outpacing the Democratic candidates' individual totals so far.

Sanders' massive haul -- one of the largest quarterly totals of any Democratic candidate this election cycle -- brings the total he has collected to date in his second bid for the presidency to $96 million, and underscores the might of his small-dollar donor base. On Wednesday, Sanders' campaign announced that it had received more than 5 million individual contributions -- a milestone his aides said no other presidential contender had achieved at this point in a White House campaign.

The Vermont independent "is proving each and every day that working class Americans are ready and willing to fund a campaign that stands up for them and takes on the biggest corporations and the wealthy," his campaign manager Faiz Shakir said in a statement. "You build a grassroots movement to beat Donald Trump and create a political revolution one $18 donation at a time, and that's exactly why Bernie is going to win."

Sanders' fourth-quarter fundraising significantly outpaces his own previous totals. Sanders raised roughly $18 million in each of the first two quarters of the year and $25.3 million in the third quarter.

Other Democratic presidential contenders have not reported their totals for the final three months of the year but seem unlikely to topple Sanders as the Democrats' fundraising leader.

Warren told supporters in late December that she had raised $17 million and encouraged her backers to help her hit a goal of $20 million by year's end. The goal represented about 20% less than she had collected in the third quarter -- pointing to a significant dip in fundraising.

Meanwhile, Biden's campaign has claimed a financial rebound. In a memo to journalists last month, his campaign manager said that as of December 1, Biden had raised more in October and November than the $15.7 million he had collected in the previous three months. But he had not released his fourth-quarter totals as of Wednesday evening.

The fourth-quarter fundraising performance is closely watched as a sign of candidates' ability to fund their campaigns through the early voting contests and whether they have built strong financial bases for a general election face-off with President Donald Trump, who has been raising record sums.

Trump and the joint fundraising committees he established with the Republican National Committee started October with $158 million in campaign cash available in their bank accounts. The battle to become the Democratic Party nominee kicks off February 3 with the Iowa caucuses.

Sanders' team emphasized his small-dollar base. His $34.5 million haul came from more than 1.8 million donations, with 40,000 new donors contributing on the final day of the quarter, according to his campaign. More than $18 million of the quarter's total raised December alone. The average donation was $18.53, up slightly from the third quarter's average of $18.07, aides said.

Sanders' campaign said that virtually all of its donors have not hit the $2,800 maximum an individual can donate to the primary, allowing the campaign to tap them again for contributions.

Sanders has long touted his grassroots fundraising but increasingly has sought to draw contrasts with opponents, such as billionaire Michael Bloomberg and Buttigieg, who faced intense criticism during last month's Democratic presidential debate over attending a high-dollar fundraiser in a Napa Valley wine cave.

Even as he leads early fundraising, the billionaires now in the Democratic race are tapping their fortunes to outspend their rivals by wide margins. Bloomberg, who entered the contest in late November, and California environmentalist Tom Steyer have spent a combined $255 million on television advertising so far, according to a tally by Kantar Media's Campaign Media Analysis Group.