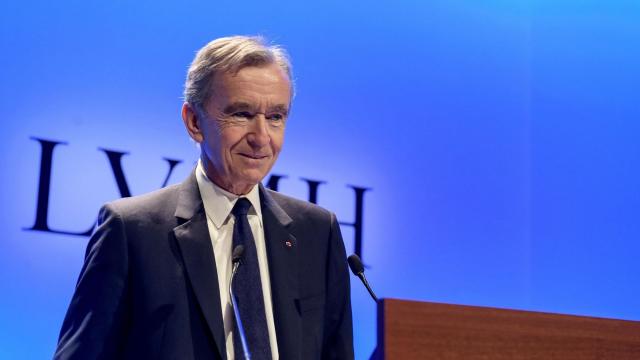 CNN — Jeff Bezos and Bill Gates can clearly afford a lot of leather wallets from Louis Vuitton and little blue boxes from Tiffany. But the world's two richest people could both soon find themselves worth less than the head of LVMH because of its takeover of Tiffany.

Bernard Arnault, chairman and CEO of LVMH, is now worth nearly $108 billion, according to real time wealth rankings tracked by Forbes. Arnault's net worth jumped more than 1% Monday and nearly another 3% Tuesday along with LVMH's stock following his company's agreement to buy Tiffany for more than $16 billion. Arnault and his family own more than 47% of the French luxury goods giant.

The spike in LVMH shares puts Arnault just ahead of Microsoft co-founder Gates, who has a net worth of $107 billion, and trailing only Amazon CEO Bezos, who tops the Forbes list with a fortune of just over $110 billion.

Arnault is trailing Bezos and Gates by a wider margin according to Bloomberg, which has Arnault's net worth estimated at $103 billion while Gates and Bezos are listed at about $110 billion. Bloomberg updates its tally only once a day at the end of the market close.

Arnault, Bezos and Gates are all comfortably ahead of other mega-billionaires as well.

According to Forbes, Berkshire Hathaway's Warren Buffett is worth $86 billion while Facebook CEO Mark Zuckerberg has a net worth of about $75 billion. Oracle's Larry Ellison and Spanish retail magnate Amancio Ortega, the co-founder of Inditex, which owns the Zara fast fashion chain, are each worth just under $70 billion.