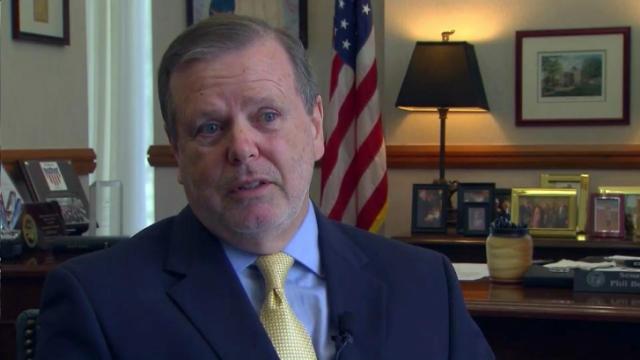 Filings with the Federal Communications Commission show the Berger campaign bought more than $82,000 in airtime on Triad broadcast stations WXII and WFMY. The buy, made last week, runs through September.

The campaign also bought nearly $40,000 of airtime on Time Warner Cable, from ESPN to Lifetime to the Food Channel. The report states the primary target demographic is women over 35.

Berger, arguably the most powerful political leader in the state aside from the governor, represents District 26, which includes parts of Guilford and Rockingham counties.

As in many places in North Carolina, registered Democratic voters outnumber registered Republican voters in District 26. However, it has a strong track record of GOP support, and it's generally considered a solid Republican seat.

However, rumors have swirled for the past few weeks that Berger's 2014 race against political newcomer William Osborne could be much closer. While his campaign declined to discuss his poll numbers, polling by Democrats reportedly shows the race nearly tied.

Democratic consultant Brad Crone, who is not involved in the race, says the buy signals that Berger may have seen some similarly close polls.

"It is an enormous buy for a sitting president pro tem senator," Crone told WRAL News. "It clearly shows that Sen. Berger is not going to take anything for granted in his home district."

Berger is a prolific fundraiser. His most recent campaign finance report showed more than $1 million cash on hand as of June 30. He raised more than $250,000 in the second quarter of 2014 alone, so the ad buy clearly fits into his budget. By comparison, Osborne reported only $6,100 cash on hand for the same period.

However, Brent Laurenz with the North Carolina Center for Voter Education said the ad buy is "a little strange."

"Typically, House and Senate leaders raise a lot of money to help their colleagues, and they rarely have to spend it on their own elections," Laurenz said.

"He's never taken an opponent for granted, and isn't going to start now," Martin said. "It's a modest buy that we think will get his message to voters across the district. It's as simple as that."

WRAL News was unable to find a record of Berger buying television airtime in 2010 or 2012, though Martin said Berger bought some ad time in the 2012 primary.

The ad that's currently running is one that Berger initially aired on cable in September 2013, leading to speculation that he was testing the political waters for a U.S. Senate run in 2014 against Democratic Sen. Kay Hagan. Berger ultimately decided not to enter that primary, which was won by a fellow legislative leader, House Speaker Thom Tillis.

The ad touts Berger's accomplishments in the legislature.

"Shouldn't you show a photo ID to vote? Liberals like Obama and Kay Hagan say no," the narrator says. "Now, thanks to Phil Berger, voters must show a valid photo ID to vote."