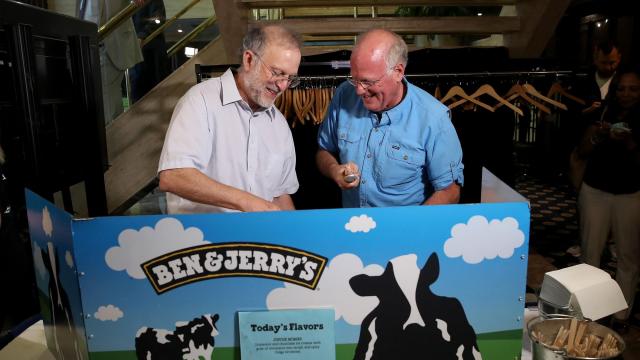 CNN — Ben & Jerry's two co-founders want to make it easier for Americans to sue police officers who abuse their authority, a move that reform advocates say is a key step towards substantive police reform.

Ben Cohen and Jerry Greenfield made their views clear during a virtual press conference Tuesday announcing the new campaign to end qualified immunity -- the Supreme Court doctrine that shields law enforcement officers from being personally sued for actions performed in the line of duty.

The Campaign to End Qualified Immunity is being championed by Cohen and Greenfield as individuals, and activist Shaun King and rapper Michael "Killer Mike" Render joined the meeting along with other reform advocates. Qualified immunity reform has received bipartisan support from Republicans including US Rep. Tom McClintock of California and Indiana Sen. Mike Braun, as well as Democrats like Massachusetts Rep. Ayanna Pressley and New Jersey Sen. Cory Booker.

NFL stars Tom Brady and Drew Brees are among the more than 1,500 athletes and artists who have endorsed the campaign, which is also supported by 671 business leaders, according to its website.

"We are now united in a coalition that is resolved to end this get-out-of-jail free card for bad cops," Cohen told reporters during the briefing. "It is now time to shift from protest to policy."

What is qualified immunity?

The qualified immunity "doctrine is both fundamentally unlawful and fundamentally unjust," said Jay Schweikert, a policy analyst at the Cato Institute, a libertarian think tank."It's quite common to say in applying this doctrine, 'Yes, your rights were violated, but we can't find a prior case where someone else's rights were violated in quite the same way, so you get nothing,' and the defendant gets off scot free."

Supporters of qualified immunity argue it's necessary to protect officers from frivolous lawsuits -- like the political advocacy group National Police Support Fund, who says ending the policy could discourage people from choosing careers in law enforcement. And Federal Law Enforcement Officers Association president Larry Cosme wrote in a June letter that "law enforcement need qualified immunity in order to carry out their jobs. Law enforcement is required to make split-second decisions. Without qualified immunity they may be hesitant to act when it is most needed."

But some officers say qualified immunity is bad policy for police as well as civilians, according to ex-police captain Sonia Pruitt, the former president of the Coalition of Black Police Officers who retired from the force last year.

"When police and police unions protect the worst in our ranks ... we create divisions within our rank-and-file," Pruitt said. "After 28 years in policing, I can attest to the damage that this doctrine does to the public and the public trust."

Killer Mike called on White conservatives to support overturning qualified immunity along with Democrats, pointing out that unarmed White Americans including Tony Timpa, Justine Ruszczyk and Daniel Shaver have also been killed by police in addition to Black Americans, who are killed at higher rates.

"This is happening to poor White people too," Render said.

What do Ben & Jerry's co-founders want?

Cohen and Greenfield's new campaign seeks to educate the public about qualified immunity and ultimately build support for a federal law ending the controversial doctrine.

It calls on Americans to tell their elected representatives to end qualified immunity, and write letters to media outlets to support such a measure. Congress hasn't taken up the issue since last summer: The End Qualified Immunity Act sponsored by Pressley was passed in the House in June but later died in the Senate.

The campaign organizers expect a new bill to be put forth in the near future. "Once there is a bill, which we think there will be pretty soon, the action will be more concrete," campaign organizer Melana Dayanim told CNN Business.

King, the activist, said he hopes Harris, Gupta and Clarke can push Biden, who as a senator sponsored the 1994 Crime Bill that led to the mass incarceration of Black Americans, to become the next Lyndon B. Johnson. As a Texas senator, Johnson often supported the segregationist agenda of the so-called Dixiecrats, but as President he was responsible for some of the most impactful progressive policies in US history.

"I just wonder if Joe Biden will step up in the way that Lyndon Johnson stepped up," King said.

While the campaign to end qualified immunity is being led by Cohen and Greenfield as individuals, not Ben & Jerry's as a brand, their company has taken progressive stances on political issues for decades.

The company's brand of corporate activism has led to boycotts over the years, but sales surged last summer after it came out in support of defunding the police. It was a policy position most businesses weren't willing to take after the killing of George Floyd, when many major brands pledged to do more to end institutional racism.

Ben & Jerry's parent company Unilever has also been a supporter of bolstering economic and social equity. The London-based conglomerate, which acquired the ice cream brand in 2000, promised in January to ensure that every worker in its supply chain is paid a living wage by 2030.

The firm's comfort with Ben & Jerry's social justice stances has been surprising to Helio Fred Garcia, founder and CEO of Logos Consulting Group, a crisis management company that works for major corporations.

"Conglomerates typically try to stay off the radar screen on divisive social issues," Garcia told CNN Business. "There's no surprise that the Ben & Jerry's brand is involved. What is intriguing is that their parent Unilever seems to be perfectly comfortable with that."

The commitment progressive causes has helped Ben & Jerry's navigate tissues that other companies have struggled with, according to Allen Adamson, co-founder of New York-based branding consultancy Metaforce.

"Companies that effectively pursue progressive activism take a 'marathon, not a sprint' approach," Adamson told CNN Business. "They engage for the long term and stay true to their core company values."

Cohen, the Ben & Jerry's co-founder, said the positions his company takes are usually ones supported by a majority of the public. A July Pew Research poll that showed two-thirds of Americans support giving civilians the power to sue abusive officers.

"Our experience has been that as the company takes more and more stands on various social or justice issues, we sell more and more ice cream," Cohen told CNN Business. "It didn't start out that way. That wasn't the purpose of us taking those stands, but that's what's happened."

Correction: The campaign to end qualified immunity is being led by Ben Cohen and Jerry Greenfield as individuals, not their company Ben & Jerry's.